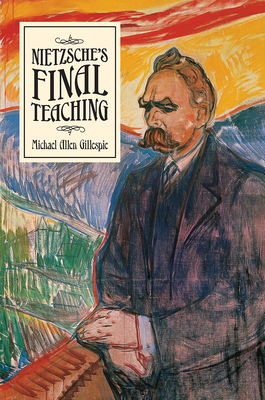 In the seven and a half years before his collapse into madness, Nietzsche completed Thus Spoke Zarathustra, the best-selling and most widely read philosophical work of all time, as well as six additional works that are today considered required reading for Western intellectuals. Together, these works mark the final period of Nietzsche’s thought, when he developed a new, more profound, and more systematic teaching rooted in the idea of the eternal recurrence, which he considered his deepest thought.

Cutting against the grain of most current Nietzsche scholarship, Michael Allen Gillespie presents the thought of the late Nietzsche as Nietzsche himself intended, drawing not only on his published works but on the plans for the works he was unable to complete, which can be found throughout his notes and correspondence. Gillespie argues that the idea of the eternal recurrence transformed Nietzsche’s thinking from 1881 to 1889. It provided both the basis for his rejection of traditional metaphysics and the grounding for the new logic, ontology, theology, and anthropology he intended to create with the aim of a fundamental transformation of European civilization, a “revaluation of all values.” Nietzsche first broached the idea of the eternal recurrence in Thus Spoke Zarathustra, but its failure to gain attention or public acceptance led him to present the idea again through a series of works intended to culminate in a never-completed magnum opus. Nietzsche believed this idea would enable the redemption of humanity. At the same time, he recognized its terrifying, apocalyptic consequences, since it would also produce wars of unprecedented ferocity and destruction.

Through his careful analysis, Gillespie reveals a more radical and more dangerous Nietzsche than the humanistic or democratic Nietzsche we commonly think of today, but also a Nietzsche who was deeply at odds with the Nietzsche imagined to be the forefather of Fascism. Gillespie’s essays examine Nietzsche’s final teaching—its components and its political, philosophical, and theological significance. The book concludes with a critical examination and a reflection on its meaning for us today.

“Nietzsche’s Final Teaching is the product of the author’s decades-long consideration of Nietzsche’s work. Gillespie takes seriously the primacy for Nietzsche of his teaching of eternal recurrence, and explores with novelty and precision Nietzsche’s attempt to unify philosophy with music. The result is an impressive discussion of Ecce Homo, Twilight of the Idols, Thus Spoke Zarathustra, and other works, and a thought-provoking view of Nietzsche as a whole.”

“This is a beautifully written account of Nietzsche’s ‘final teaching,’ engaging the rich intersection of Nietzsche’s thinking with the major twentieth-century interpretations of his thought from Heidegger and Klossowski to Lampert and Strauss. Gillespie brings the resources of political philosophy to situate this final teaching together with nihilism, in its real world-historical context, and the transhumanity of the Übermensch, toward the ambitious project of articulating a ‘musical politics,’ very literally in sonata form, and including a masterful discussion of Plato. In this way, Gillespie finalizes Nietzsche’s teaching of eternal return as a political project.”
— Babette Babich, Fordham University

“Nietzsche’s Final Teaching is the work of a seasoned scholar whose thorough mastery of Nietzsche’s notoriously difficult writings, especially the notebooks and letters, informs a remarkably consistent view of his philosophy. In admirably clear and accessible prose, Gillespie argues that the idea of the eternal recurrence forms the basis of what he calls Nietzsche’s (anti-)metaphysics and sketches the terrifying practical consequences Nietzsche hoped would follow from this idea.”

Michael Allen Gillespie is professor of political science and philosophy at Duke University.