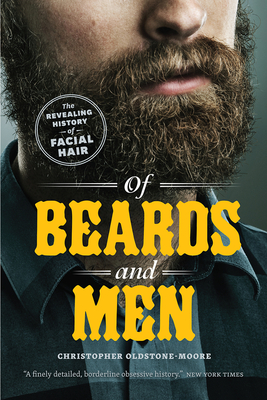 Of Beards and Men

The Revealing History of Facial Hair

Beards—they’re all the rage these days. Take a look around: from hip urbanites to rustic outdoorsmen, well-groomed metrosexuals to post-season hockey players, facial hair is everywhere. The New York Times traces this hairy trend to Big Apple hipsters circa 2005 and reports that today some New Yorkers pay thousands of dollars for facial hair transplants to disguise patchy, juvenile beards. And in 2014, blogger Nicki Daniels excoriated bearded hipsters for turning a symbol of manliness and power into a flimsy fashion statement. The beard, she said, has turned into the padded bra of masculinity.

Of Beards and Men makes the case that today’s bearded renaissance is part of a centuries-long cycle in which facial hairstyles have varied in response to changing ideals of masculinity. Christopher Oldstone-Moore explains that the clean-shaven face has been the default style throughout Western history—see Alexander the Great’s beardless face, for example, as the Greek heroic ideal. But the primacy of razors has been challenged over the years by four great bearded movements, beginning with Hadrian in the second century and stretching to today’s bristled resurgence. The clean-shaven face today, Oldstone-Moore says, has come to signify a virtuous and sociable man, whereas the beard marks someone as self-reliant and unconventional. History, then, has established specific meanings for facial hair, which both inspire and constrain a man’s choices in how he presents himself to the world.

This fascinating and erudite history of facial hair cracks the masculine hair code, shedding light on the choices men make as they shape the hair on their faces. Oldstone-Moore adeptly lays to rest common misperceptions about beards and vividly illustrates the connection between grooming, identity, culture, and masculinity. To a surprising degree, we find, the history of men is written on their faces.

Praise For Of Beards and Men: The Revealing History of Facial Hair…

“A finely detailed, borderline obsessive history. . . . Oldstone-Moore is a sensitive observer, who dispenses ironies with a light hand; tonsorially enthralled as he may be, he also seems in on the joke. His style is clipping and spry, free from the haughty grandiloquence and leaden jargoneering that characterizes much academic writing. . . . His long view on our unshaven history is likely to stand unchallenged for some time.”

“Engaging . . . Readers will be enlightened as Oldstone-Moore links facial hair to gender perceptions, religious doctrine, military discipline, philosophical schools of thought, and more. . . . This is a great book for anyone who’s ever pondered why Jesus is portrayed with a beard, wondered about the origin of Hitler’s and Stalin’s mustaches, speculated why the Amish grow beards but shave their moustaches, or realized that no U.S. presidential candidate has sported facial hair since Dewey lost to Truman.”

“In Of Beards and Men, the historian Oldstone-Moore plumbs the many meanings of facial hair in Western history. . . . He writes well, and his erudition is impressive, enabling readers to learn all kinds of interesting things from this zigzag chronicle, which is basically a history of Western civilization as written on the faces of its leading men. Who knew, for example, that in 1968 Fidel Castro’s regime barred facial hair for students at Havana University?”
— Washington Post

“Much like growing a beard itself, the investment of time and patience (not to mention the occasional recombing) can be appreciated in hindsight. We learn that ancient Sumerians and Egyptians shaved to distinguish bearded lords from clean-shaven priests, and most of the gods of ancient Greece were portrayed as beardless while mortals were bearded. Oldstone-Moore devotes an entire chapter to explaining why Jesus was sometimes depicted with a beard and sometimes not—and it makes a lot of sense. . . . Of Beards and Men may not completely crack the code on facial hair, but once you've read it, it's unlikely you'll take any beard—or mustache—at face value again.”
— Los Angeles Times

“For everyone with a hirsute family member, a bearded patriarch, a fuzzy metro-sexual, here’s a great gift, a not-entirely-serious account of why and when men grow facial hair. . . . Of Beards and Men is a history of beards, which begins in ancient times and works its way to the modern day, demonstrating when beards were cool and when they were not.”
— NPR Weekend

“Oldstone-Moore has a fantastic story to tell. . . He sees things other historians ignore and makes useful, even original connections. On Hitler and Stalin, he suggests that ‘an analysis of mustaches might have alerted the Western allies to the real possibility of German-Soviet agreement.’ Perhaps wary of being pigeonholed, he supplies two author photographs, one with a beard and one without. It’s typical of the care, attention and dry wit to be found throughout this wholly admirable book.”

— Daily Mail, book of the week

“Symbolically speaking, human beings have been tugging on beards for as long as we’ve had tools to shave them with. Oldstone-Moore’s book comes at a time of newly sprouted interest in the meaning of facial hair. . . . The social and political consequences of beardedness are at the heart of Oldstone-Moore’s curiosity-packed, if rather dry, scholarly study of his subject.”
— Boston Globe

“Oldstone-Moore argues that throughout history, beards–or the lack thereof–have been used by religious and political leaders, as well as common men, as essential elements to creating group identity. In the Middle Ages, Catholic priests who chose to sport a beard could be excommunicated by the church, whose canonical laws required priests to be clean-shaven.”
— Atlas Obscura

“A well-timed study, in this day when hipsters have become the latest to lay enthusiastic claim to the beard and the moustache.”
— National Book Review

“We tumble through a series of lively case studies that illustrate those changing conceptions of masculinity Oldstone-Moore supposes changing attitudes to facial hair to represent. Despite excursions into the ancient, and the contemporary, Middle East, the focus remains on Western culture: Jesus’s beard; Lincoln’s beard; Hitler’s mustache.”

“Oldstone-Moore is also good at retrieving smaller clippings of cultural history, such as Tarzan’s decision to define his identity as Lord of the Apes by shaving, or the fact that voters tend not to elect bearded politicians, presumably because they worry that someone whose face cannot be seen clearly may have something to hide. . . . This scholarly and entertaining book does a fine job of showing that facial hair is itself something of a cultural blank—a little screen on to which we project all manner of fantasies and fears.”
— Telegraph

“Of Beards and Men is a fascinating, occasionally dizzying depiction of the oscillation between acceptance and prohibition of facial hair.”
— Toronto Star

“The history of civilization as we know it has been humankind's struggle to overcome nature, to assert order where entropy rules. But, as Oldstone-Moore writes in his book Of Beards and Men, each of us play out a microcosm of that struggle every morning in our personal grooming decisions.”
— Esquire

“Oldstone-Moore can be brilliant when teasing out the meanings of specific beards. There’s a bravura passage on why Christ is clean-shaven in some early images and bearded in others.”
— Spectator

“Perhaps the most striking thing about Of Beards and Men is the revelation of one’s own ignorance: who knew that such a fascinating through-line ran amid history, which itself ends up telling us so much about sexuality, gender, religiosity and sexual attraction? Oldstone-Moore has done so much more than to avoid easy tropes and clichéd representations of facial hair and the men who wear it. Of Beards and Men is a sober and sensible but arresting walk through not simply a history of masculinity, but also the changing face of gender, sexuality, what’s what in the world of cultural acceptance, and the world’s changing tides of thought.”
— PopMatters

“Oldstone-Moore poses weighty questions. Are beards now regarded as signs of grunty masculinity or nonconformity? Is designer stubble a modish denigration of the real beard? How confusing do the signals get when many gay subcultures go for the hairy look? . . . A good, informative read.”
— New Zealand Listener

“To shave or not to shave, that is the question. Oldstone-Moore’s crackling collage of historical beard-abilia gave me new found respect for my scruff.”
— Simon Doonan

“Written in a very lively, witty, and accessible manner, Of Beards and Men is ambitious and compelling, surveying an impressive amount of material across a broad sweep of time. It wears its learning lightly, and Oldstone-Moore’s fluid and witty prose makes the book eminently readable. A real page-turner!”
— Christopher E. Forth, author of Masculinity in the Modern West

“Beards have always been about power, politics and how men perform notions of masculinity in a given era. Oldstone-Moore fills in some of the missing history with a scholarly and entertaining pogonological romp from pre-history to the post-modern.”
— Allan Peterkin, author of One Thousand Beards: A Cultural History of Facial Hair

“The changing fashions in male facial hair are the subject of this fascinating book—a subject not as incidental or trivial as it might appear. How men have displayed beards, mustaches, or shaven faces through the ages has an interesting intellectual history behind it. . . .This well-written book abounds in provocative information, anecdote, and illustrations. It is highly recommended.”
— Key Reporter

Christopher Oldstone-Moore is Assistant Professor of History at Augustana College, Sioux Falls, South Dakota, U.S.A
Loading...
or support indie stores by buying on
(This book is on backorder)