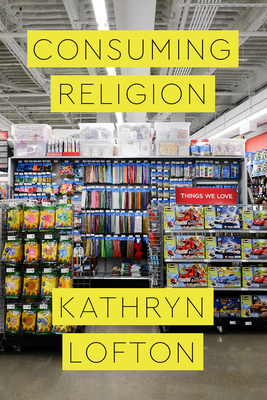 What are you drawn to like, to watch, or even to binge? What are you free to consume, and what do you become through consumption? These questions of desire and value, Kathryn Lofton argues, are questions for the study of religion. In eleven essays exploring soap and office cubicles, Britney Spears and the Kardashians, corporate culture and Goldman Sachs, Lofton shows the conceptual levers of religion in thinking about social modes of encounter, use, and longing. Wherever we see people articulate their dreams of and for the world, wherever we see those dreams organized into protocols, images, manuals, and contracts, we glimpse what the word “religion” allows us to describe and understand.
With great style and analytical acumen, Lofton offers the ultimate guide to religion and consumption in our capitalizing times.

"In sum Consuming Religion is an elegant, critical, wide-ranging and thought-provoking account of religion and spirituality in America today."
— Times Higher Education

"Lofton’s Consuming Religion takes us through the Kardashians, cubicle design, and Goldman Sachs, among other phenomena, to reveal the relationship of religion and popular culture. At its best, this book feels like an exciting revelation about who and what we should be addressing in religious studies."
— Reading Religion

“Not only are Lofton's definitions of religion alone worth the price of admission to this text, but they should also remind us of previous studies that chose to foreground religion's less-than-liberative characteristics within the field of American religion. . . . Its strength as an edited collection manifests most strongly through its method of analysis across scale and academic subject matter. . . We may all be consuming this text for the foreseeable future in order to understand better its claims, but we are also, at the same time, being consumed by it and its various methodological seductions.”
— H-Net Reviews

The separation of her research into examinations of niches within neo-liberal and late capitalist practices diffuses as well as sharpens her analytical and erudite examination of corporate cubicles, the Kardashians, soap advertising, parenting, ritualism debates in the 19th century and Britney Spears, to name but a few of her diverse and detailed examples packaged as Consuming Religion. . . seeing her media coverage through the filters of Georges Bataille, Claude Lévi-Strauss, Sigmund Freud and René Girard deepens relevance.”
— Spectrum Culture

“Lofton’s intellectually dizzying and absolutely brilliant book calls our attention to the fundamentals of our consuming religion. . .[a] field-defining study. . . . In the age of selfie sticks, Lofton thus brings the study of religion up close and personal with its own ‘othered’ and refracted reflection in the mirror.”
— The Revealer

“Lofton revitalizes academic definitions of religion, putting them to work in the midst of the limitations and possibilities of organizing life, attending to how people configure their lives as religious, but also amplifying the recurring patterns and processes of organization that have been examined in the academic study of religion as elementary forms of religious life.”
— Sociology of Religion

"With big data and mass customization changing marketing strategies and transforming patterns of consumption at warp speed, Consuming Religion is a timely exploration of a world in which reality is branded. Unexpected connections and juxtapositions reveal religion in unexpected places and practices. To follow Kathryn Lofton’s romp through today’s mediascape is to discover the superficiality of pop culture to be surprisingly profound."
— Mark C. Taylor, Columbia University

"Kathryn Lofton’s Consuming Religion is a modern classic. It is the sequel to Durkheim’s Elementary Forms of Religious Life and is destined to be as enduring. Moving beyond stale debates on secularism, pressing us to see religion in new forms of modernity, Lofton takes us on a lively tour of religion in the everyday practices and institutions of consumer society. In the end, this tour de force leaves us with both a new respect for, and critique of, religion as consumerism and consumerism as religion."
— Mark S. Cladis, Brown University

“There is no more perspicacious observer of the relentless religious innovation of contemporary consumer culture than Kathryn Lofton. With restless brilliance and erudition, she takes us on a chilling tour of the American marketplace figured as religion. Having revealed the sacrificial violence at the heart of our common life, Lofton urges us to commit ourselves to making religion ‘do something different’—to ‘freedom from the primal horde.’”
— Winnifred Fallers Sullivan, author of A Ministry of Presence

“In a critical voice recognizably hers and only hers, Lofton brilliantly probes the most cunning junctures of contemporary neoliberal religion. Ranging over corporate cubicles; the advertising industry; finance; the dark arts of the creation, promotion, and destruction of celebrity; and much, much more, Lofton shows how at the deepest levels of imagination, desire, and discipline the modern histories of neoliberalism and religion—and the contemporary practices of both—have been and remain utterly entwined. Consuming Religion is a learned, incisive, often revelatory work; it is also deeply humane and compassionate. With this book, Lofton not only emerges clearly as the contemporary study of religion’s Walter Benjamin; she also helps restore the social critical voice of religious studies. Such a project was never more urgent than it is today.”
— Robert A. Orsi, author of History and Presence

"Kathryn Lofton breaks wide the definition of religion, and in so doing, redefines the interplay between the sacred and the so-called secular—whether it's pop icons or parenting, the Kardashians or corporate culture. We have been waiting for a book that elevates the discourse about how marketing and faith collide and co-mingle. Consuming Religion is that book."
— Mara Einstein, author of Black Ops Advertising and Brands of Faith

"This book explores the 'hermeneutic territory' that opens up when scholars accept the 'commonalities' of consumer popular culture and traditional religions (xi). It is, ultimately, not a book about consumer culture’s effects on traditional religions, but about how corporate discourse, consumer marketing, and media celebrity themselves constitute forms of sociality that demand analysis by scholars of religion."
— Journal of the American Academy of Religion

"Lofton's Consuming Religion is a refreshing and thought-provoking collection of essays in which she aims to illuminate the relationship with modern consumption culture. Breaking down this extensive endeavor into remarkable sub-themes, Lofton explores the category of religion as 'a category of law and learning, as a description of social movements, and as a summary of identity or claim of belief,' and the ways in which consumer culture illuminates what individuals value."
— Numen
or support indie stores by buying on
(This book is on backorder)
Copyright © 2020 American Booksellers Association