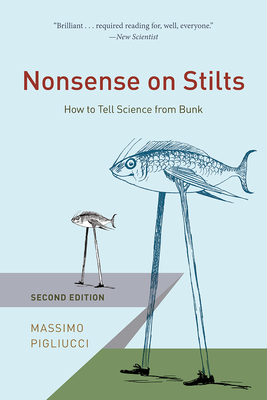 Recent polls suggest that fewer than 40 percent of Americans believe in Darwin’s theory of evolution, despite it being one of science’s best-established findings. Parents still refuse to vaccinate their children for fear it causes autism, though this link has been consistently disproved. And about 40 percent of Americans believe that the threat of global warming is exaggerated, including many political leaders.

In this era of fake news and alternative facts, there is more bunk than ever. But why do people believe in it? And what causes them to embrace such pseudoscientific beliefs and practices? In this fully revised second edition, noted skeptic Massimo Pigliucci sets out to separate the fact from the fantasy in an entertaining exploration of the nature of science, the borderlands of fringe science, and—borrowing a famous phrase from philosopher Jeremy Bentham—the nonsense on stilts. Presenting case studies on a number of controversial topics, Pigliucci cuts through the ambiguity surrounding science to look more closely at how science is conducted, how it is disseminated, how it is interpreted, and what it means to our society. The result is in many ways a “taxonomy of bunk” that explores the intersection of science and culture at large.

No one—neither the public intellectuals in the culture wars between defenders and detractors of science nor the believers of pseudoscience themselves—is spared Pigliucci’s incisive analysis in this timely reminder of the need to maintain a line between expertise and assumption. Broad in scope and implication, Nonsense on Stilts is a captivating guide for the intelligent citizen who wishes to make up her own mind while navigating the perilous debates that will shape the future of our planet.

Praise For Nonsense on Stilts…

“How can we decide what counts as science? That is the central question of this brilliant book, which ought to be required reading for, well, everyone.”
— Amanda Gefter

“Pigliucci’s book serves a seriously worthwhile purpose: that of giving you, the reader, tools and instructions for assembling your very own ‘baloney-detector.’ Armed with this, you stand a vastly improved chance of separating the wheat of reliable knowledge from the chaff of fashionable nonsense in your daily harvest of data.”
— Lou Marinoff

“A tour of solid science, shaky science, and pseudoscience, this crash course in critical thinking by biologist and philosopher Pigliucci includes handy rules for evaluating the confused public discourse on climate change, evolution, and even UFOs.”
— Discover, on the first edition

“Pigliucci’s attack of high-stilted nonsense not only offers a great service in a world that is littered with irrational beliefs and pseudoscience, it is also an incisive and philosophically informed analysis of the nature of science and the pursuit of reliable knowledge. With books like [this] on the shelf, it is clear that there is more to skepticism than intellectual garbage disposal.”
— Metascience, on the first edition

Massimo Pigliucci is the K. D. Irani Professor of Philosophy at the City College of New York. He is the author, editor, or coeditor of many books, including How to Be a Stoic: Using Ancient Philosophy to Live a Modern Life and, most recently, Science Unlimited?: The Challenges of Scientism, the latter also published by the University of Chicago Press.