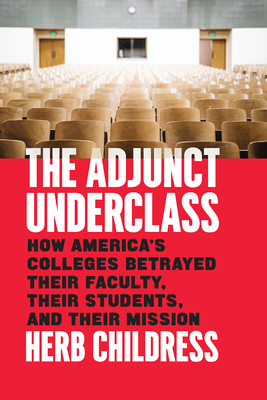 How America’s Colleges Betrayed Their Faculty, Their Students, and Their Mission

Class ends. Students pack up and head back to their dorms. The professor, meanwhile, goes to her car . . . to catch a little sleep, and then eat a cheeseburger in her lap before driving across the city to a different university to teach another, wholly different class. All for a paycheck that, once prep and grading are factored in, barely reaches minimum wage.

Welcome to the life of the mind in the gig economy. Over the past few decades, the job of college professor has been utterly transformed—for the worse. America’s colleges and universities were designed to serve students and create knowledge through the teaching, research, and stability that come with the longevity of tenured faculty, but higher education today is dominated by adjuncts. In 1975, only thirty percent of faculty held temporary or part-time positions. By 2011, as universities faced both a decrease in public support and ballooning administrative costs, that number topped fifty percent. Now, some surveys suggest that as many as seventy percent of American professors are working course-to-course, with few benefits, little to no security, and extremely low pay.

In The Adjunct Underclass, Herb Childress draws on his own firsthand experience and that of other adjuncts to tell the story of how higher education reached this sorry state. Pinpointing numerous forces within and beyond higher ed that have driven this shift, he shows us the damage wrought by contingency, not only on the adjunct faculty themselves, but also on students, the permanent faculty and administration, and the nation. How can we say that we value higher education when we treat educators like desperate day laborers?

Measured but passionate, rooted in facts but sure to shock, The Adjunct Underclass reveals the conflicting values, strangled resources, and competing goals that have fundamentally changed our idea of what college should be. This book is a call to arms for anyone who believes that strong colleges are vital to society.


Praise For The Adjunct Underclass: How America’s Colleges Betrayed Their Faculty, Their Students, and Their Mission…

“The Adjunct Underclass belongs to what has, at this point, become a recognizable genre, popularly known as ‘quit lit.’ (That name doesn’t capture the degree to which people feel that they are actually forced out of the profession.) Childress has a way of reinvigorating familiar tropes. He likens the adjunct professoriate to local auto mechanics crushed by national franchises, cab drivers forced to hustle against apps, journalists turned ‘content providers’ trying to stay afloat in hyper-partisan times. He describes adjuncts as ‘shock absorbers’ and compares their situation to the ‘invisibility of garment workers in Bangladesh.’ . . . In the last few pages of Childress’s book, the manifesto melts away, and we’re afforded a momentary glimpse of a deeply moving memoir. . . . Academics often traffic in a tone of clear-eyed detachment, rising above the emotional fray. But there is nothing more universal than the moment when Childress realizes that his was never a problem of drive or focus; the horizon was illusory by design, moving according to someone else’s whims, continually drifting out of reach.”
— New Yorker

"The Adjunct Underclass is a heartbreaking indictment of American higher education. In the book's epilogue, 'Life in Exile,' Mr. Childress reflects on his inability to find a permanent faculty position. . . . [He] keenly regrets his failure, but he shouldn't. Failure has freed him to write truthfully about an injustice few others even see."
— Wall Street Journal

"With this book, Childress has written a generous note of condolence to the profession that killed his dream of a tenure-track position. It has killed the same dream for a generation of academics who have left the profession or hang on today in what he calls 'the vast purgatory of contingent life.' He claims that higher education’s ecosystem is being destroyed by a million bad decisions. While many will disagree with him on the genesis of the disaster, by reading his book we engage in the dot-connecting and relationship-repairing that Childress urges us to do so that we may work to restore higher education’s ecosystem and eliminate the adjunct underclass."
— American Association of University Professors

“The Adjunct Underclass is a powerful read, an emotional read as Childress peppers his analysis with his own experiences, and concludes the book with a chapter on the ‘aftermath’ in which he makes the personal cost of his desire to engage in work he believed to be meaningful, only to be one of those bulldozed into rotting piles of bodies on the shore.”

“This lyric lament for the traditional faculty career that its author, Herb Childress, spent decades trying but failing to attain conveys a raw longing and naked grief that left me stunned.”
— Beryl Lieff Benderly

“Childress describes why colleges and universities turned to a contingent workforce, and the consequences this shift has had. A former adjunct himself, Childress explains how this system has left adjuncts impoverished and heartbroken. . . . His book, though factual and well reasoned, is at its essence a cri de Coeur. . . . Disappointment and anger infuse his rhetoric, giving the book a more emotional and personal tenor than one normally encounters in works about public policy. But that’s understandable in a profession where some people have lifetime job guarantees and others sleep in their cars.”

"A biting monograph--some of it research-laden, some of it personal--about how universities are undermining both student learning and the lives of temporary teachers. . . .  At the base of the author's anger is hypocrisy: While university administrators and their funders claim to value the transformative power of higher education, they treat countless part-time faculty like expendable employees. Though the book is clearly an outlet for his own anger, Childress also seeks to inform families of college-age children what they will encounter in classrooms. An informative screed on a depressing trend that continues apace."

"The Adjunct Underclass is a competent guide to academia, deconstructing and unpacking confusing jargon, interrogating the problems of faculty contingency, and urging us to center values that will guide us toward fairer treatment of faculty. The book drives the conversation about the exploitation of academic labor forward in a meaningful and accessible way."
— Science

"In the past, the majority of US university faculty were full-time and tenured; now most professors are adjuncts, working part-time gigs with low pay and few benefits. In a fascinating combination of history, call to action, and warning, Childress deftly documents how and why this shift happened, its effects, and why it's so concerning. . . . Childress's eight recommendations and four statements for principled actions are especially intriguing. This well-written, effective work will be appreciated by graduate students hoping to become faculty as well as high school guidance counselors, parens of college students, and those researching higher education administration."

"The Adjunct Underclass is a devastating shot from deep within the woods, an emergency S.O.S. flare to those who can see the forest for the trees. . . . providing a clear picture of how low we've fallen and how we may never rise again without some serious reform."
— PopMatters

"This is an absolutely fabulous book. At one level, this is a critical analysis of the exploitation of contingent faculty in the current ecology of American higher education. But that description is too anodyne, too colorless, and too ordinary to capture the power of this book. The writing is at different times and the same time brilliant, funny, angry, and ironic. It informs the reader, engages the reader, infuriates the reader, entertains the reader, and never lets the reader off the hook, from the brilliant prologue to the compelling aftermath."
— David F. Labaree, author of A Perfect Mess: The Unlikely Ascendancy of American Higher Education

"The Adjunct Underclass is a comprehensive and necessary book, and it’s written with real zing.  Even so, the rhetoric has a disciplined coolness: it wasn’t until the very end of the book that I learned that the author is among those who has suffered at the hands of the system that he describes so well.  Childress has reason to be angry, and also to grieve--and he  doesn’t suppress his emotions.  They’re clearly present in the vitality with which he examines the academy in the dock.  The Adjunct Underclass makes it abundantly clear that what we’re doing now isn’t working. From its cogent analysis to its deeply felt, humanistic conclusion, this book is a step toward recognition of that fact, and thus a step in the right direction."

— Leonard Cassuto, author of The Graduate School Mess: What Caused It and How We Can Fix It

"The Adjunct Underclass is masterfully written and thorough, covering budgets, expansion, accreditation, hiring, and the ambivalence of tenured faculty. Adjuncts offer horror stories of scraping by while waiting on empty promises of an established position. These stories demand moral outrage."
— Sojourners

A “wide-eyed account” and “good manual for anyone wondering which steps should be the first to take.”
— Lit Magazine

"Herb Childress is asking us to define new rules around today’s conditions, rules that are actually consistent with the values we claim to hold."
— John Warner

"In The Adjunct Underclass, Childress takes readers into the hallways, parking lots, and closets of colleges and universities to show us what it looks like when the education sector relies on underpaid contingent labor. . . . Childress attends to both vision and pragmatics, counters injustice with humanity, combines sarcasm with personal biography, and only places blame on those who do not have the courage to speak up for the most vulnerable among us."
— The Harvard Educational Review

Herb Childress is a partner at Teleidoscope Group, LLC, an ethnography-based consulting firm. Until 2013, he was dean of research and assessment at the Boston Architectural College, and prior to that, he was a Mellon Lecturing Fellow and associate director of the University Writing Program at Duke University. He is the author of Landscapes of Betrayal, Landscapes of Joy: Curtisville in the Lives of Its Teenagers and The PhDictionary: A Glossary of Things You Don’t Know (but Should) about Doctoral and Faculty Life.
or support indie stores by buying on