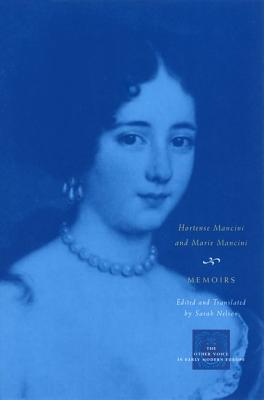 Memoirs (The Other Voice in Early Modern Europe)

The memoirs of Hortense (1646–1699) and of Marie (1639–1715) Mancini, nieces of the powerful Cardinal Mazarin and members of the court of Louis XIV, represent the earliest examples in France of memoirs published by women under their own names during their lifetimes. Both unhappily married—Marie had also fled the aftermath of her failed affair with the king—the sisters chose to leave their husbands for life on the road, a life quite rare for women of their day.

Through their writings, the Mancinis sought to rehabilitate their reputations and reclaim the right to define their public images themselves, rather than leave the stories of their lives to the intrigues of the court—and to their disgruntled ex-husbands. First translated in 1676 and 1678 and credited largely to male redactors, the two memoirs reemerge here in an accessible English translation that chronicles the beginnings of women’s rights to personal independence within the confines of an otherwise circumscribed early modern aristocratic society.

Praise For Memoirs (The Other Voice in Early Modern Europe)…

"The memoirs make fascinating reading, and not just because they tell the bracingly transgressive story of two aristocratic women who spent most of their adult lives on the lam from their husbands. Their memories of childhood at the French court are just as absorbing."
— Elisabeth Landeson

"Nelson has ably translated the two memoirs from the best, most recent editions, and echoes well the style of the originals, creating lively, dramatic tales. This is an excellent teaching text and resource for scholars unfamiliar with these works."
— Jane Couchman

Sarah Nelson is a research fellow in the Centre for Research on Families and Relationships at the University of Edinburgh.
Loading...
or
Not Currently Available for Direct Purchase