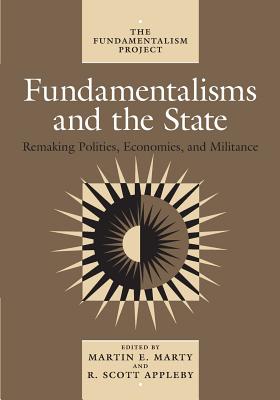 Fundamentalisms and the State (Paperback)

Do fundamentalisms tend toward political activism, and how
successful have they been in remaking political structures?
To answer this question, the contributors to this volume—
political scientists, historians of religion,
anthropologists, and sociologists—discuss the anti-
abortion movement, Operation Rescue in the United States, the
Islamic war of resistance in Afghanistan, Shi'ite
jurisprudence in Iran, and other issues. The volume
considers the effect that antisecular religious movements
have had over the past twenty-five years on national
economies, political parties, constitutional issues, and
international relations on five continents and within the
traditions of Islam, Christianity, Judaism, Buddhism,
Hinduism, and Sikhism. Marty and Appleby conclude with a
synthetic statement on the fundamentalist impact on polities,
economies, and state security.
The Fundamentalism Project, Volume 3

Martin E. Marty and R. Scott Appleby direct the
Fundamentalism Project. Marty, the Fairfax M. Cone
Distinguished Service Professor of the History of Modern
Christianity at the University of Chicago, is the senior
editor of the Christian Century and the author of
numerous books, including the multivolume Modern American
Religion, also published by the University of
Chicago Press. Appleby, a research associate at the
University of Chicago, is the author of “Church and
Age Unite!” The Modernist Impulse in American
Catholicism.
or
Buy Here
Copyright © 2020 American Booksellers Association