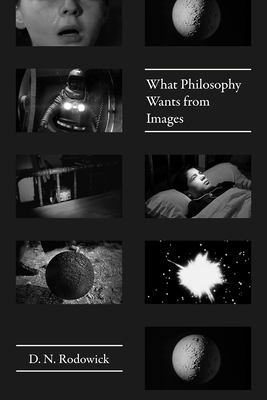 What Philosophy Wants from Images (Paperback)

In recent decades, contemporary art has displayed an ever increasing and complicated fascination with the cinema—or, perhaps more accurately, as D. N. Rodowick shows, a certain memory of cinema. Contemporary works of film, video, and moving image installation mine a vast and virtual archive of cultural experience through elliptical and discontinuous fragments of remembered images, even as the lived experience of film and photography recedes into the past, supplanted by the digital.
Rodowick here explores work by artists such as Ken Jacobs, Ernie Gehr, Victor Burgin, Harun Farocki, and others—artists who are creating forms that express a new historical consciousness of images. These forms acknowledge a complex relationship to the disappearing past even as they point toward new media that will challenge viewers’ confidence in what the images they see are or are becoming. What philosophy wants from images, Rodowick shows, is to renew itself conceptually through deep engagement with new forms of aesthetic experience.

D. N. Rodowick is the Glen A. Lloyd Distinguished Service Professor at the University of Chicago and the author of many books, including Philosophy's Artful Conversation, The Virtual Life of Film, and Elegy for Theory. He is also a curator and an experimental filmmaker and video artist.


Praise For What Philosophy Wants from Images…

"This book is Rodowick's palinode, a deeply confessional and at times personal recantation of aspects of the author’s prior writing on the cinema. Faced with new work by figures including Ken Jacobs, Harun Farocki, or Victor Burgin, Rodowick theorizes the philosophically and aesthetically unrecognizable forms that cinema may now take, beyond the old divides of analog versus digital, medium versus media.  Philosophy must adjust and invent in response to such creations, but what is ultimately most compelling about Rodowick's new book is the vision it shares of an author exploding their own approach to images, a process of self-critique and transformation far too rare in the writing of most major figures in our shared humanistic disciplines."

“What Philosophy Wants from Images explores the relationship between art and philosophy at a moment of what D. N. Rodowick describes as a ‘naming crisis’ in the world of moving image discourse and practice. He argues that because art ‘runs ahead’ of philosophy, it can help philosophy generate new concepts and ideas, and these ideas and concepts can be accessed through the formal specificity of the works in question. There is no doubt that this book will appeal internationally to film and media scholars, philosophers, and art historians. Rodowick is one of the leading voices in the field, and his work plays a particularly important role in helping to provide clear paradigms of thought at times of media confusion.”
— Karen Redrobe, University of Pennsylvania

“Philosophy is in need of something that is supplied by images: intuition, sensation, and the kinds of knowledge supplied by perceptual belief. What Philosophy Wants from Images traces lines of thought simply, in real time, demonstrating these principles through its prose style. In some ways, this is Rodowick’s most personal book, with descriptions of his own aesthetic practice and semi-anecdotal accounts of viewing and making images. Here, Rodowick continues to work with ideas from his previous books, undoing medium specificity and thinking with images in new, rich, and exciting ways.”
— Homay King, Bryn Mawr College

"D. N. Rodowick’s latest book, What Philosophy Wants from Images, is a deeply personal and markedly self-reflexive collection of essays that constitutes a response to the author’s past uncertainties regarding the future of the cinematic image . . . Rodowick has distilled a range of conceptual difficulties surrounding the contemporary moving image into a pervasive 'naming crisis.' What Philosophy Wants from Images does not aim to provide definitive answers to its titular question. Instead, it explores specific possibilities that are carefully developed and finely reasoned."
— Film Quarterly
or
Not Currently Available for Direct Purchase
Copyright © 2020 American Booksellers Association