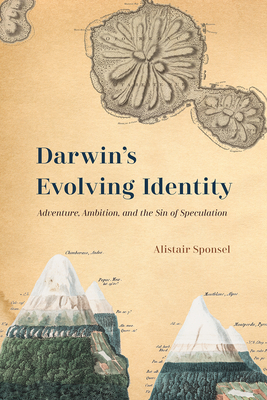 Adventure, Ambition, and the Sin of Speculation

Why—against his mentor’s exhortations to publish—did Charles Darwin take twenty years to reveal his theory of evolution by natural selection? In Darwin’s Evolving Identity, Alistair Sponsel argues that Darwin adopted this cautious approach to atone for his provocative theorizing as a young author spurred by that mentor, the geologist Charles Lyell.  While we might expect him to have been tormented by guilt about his private study of evolution, Darwin was most distressed by harsh reactions to his published work on coral reefs, volcanoes, and earthquakes, judging himself guilty of an authorial “sin of speculation.” It was the battle to defend himself against charges of overzealous theorizing as a geologist, rather than the prospect of broader public outcry over evolution, which made Darwin such a cautious author of Origin of Species.


Drawing on his own ambitious research in Darwin’s manuscripts and at the Beagle’s remotest ports of call, Sponsel takes us from the ocean to the Origin and beyond. He provides a vivid new picture of Darwin’s career as a voyaging naturalist and metropolitan author, and in doing so makes a bold argument about how we should understand the history of scientific theories.


Praise For Darwin's Evolving Identity: Adventure, Ambition, and the Sin of Speculation…

"To say something new about Charles Darwin is no mean feat. . . . And yet, Alistair Sponsel has managed to say something new. In the process, he has also said something about how theories were made, careers were managed, books were written, and – perhaps most importantly for the readership of this journal – how shipboard natural history research was done. . . . Indeed, far from reproducing the teleological narrative that so often proceeds from the Galapagos to the Origin, Sponsel recasts the theory of evolution by means of natural selection as the result of a kind of wilful, anxious procrastination. It is an appealing notion to wilful procrastinators everywhere, who would do well to spend a few hours productively sounding the depths of Darwin's amphibious worlds before turning back to their own neglected manuscripts."
— The International Journal of Maritime History

"One of the most interesting books on Darwin that I have read in a long time. . . . In a careful and most informative discussion, Sponsel focuses on Darwin’s geology, his all-encompassing scientific occupation in those early years after the Beagle voyage. . . . I learned so much from this volume."
— Quarterly Review of Biology

"Sponsel takes a different slant on Darwin's scientific writing and life. Darwin's Evolving Identity deals with the publication of The Origin of Species, and how Darwin's decision to publish was affected by his contemporaries and colleagues. More could have been written here about Alfred Russel Wallace, another naturalist whose own findings on natural selection played a major role in pushing Darwin to finish writing Origin. Darwin was caught up in the work on coral reefs, which took time and energy away from his species efforts, which spanned decades. Darwin's coral reef studies helped establish him as a scientist and writer, earning him a place in the scientific hierarchy; but Darwin was wary of publishing Origin too soon, before thoroughly fleshing out his ideas. It was not until others seemed poised to beat him to the punch that Darwin was pushed to write and publish his findings. By the time Origin was published in 1859, it was largely accepted by colleagues; some (though not all) credited Darwin in their own work. This volume provides a detailed introduction to the scientific community in Darwin's time. Recommended."
— Choice

"Sponsel resoundingly succeeds in his effort to reevaluate Darwin, making an important contribution to understanding Darwin as a scientific practitioner and as a writer. He also provides a useful exploration of the practice of scientific authorship and helps elucidate the use of evidence and speculation and the interplay between practice and theory in mid-nineteenth century British science. The book is clearly argued at every level, making plain along the way where and how it engages historiography and primary sources, in a way that is engaging and even elegant. Beyond its obvious interest to Darwin scholars and to the broader field of nineteenth century British science, this book will also appeal to a broader audience of students and enthusiasts who will find Sponsel's clear narrative approach highly accessible."
— Endeavour

“This lively, revisionist study transforms what we know about Charles Darwin’s early years as a practicing scientist. We see Darwin as a bold young geologist, stunning the geological community with his innovative theory of coral reef formation, and as a new author eager to manage his growing reputation by strategizing with his friend and mentor Charles Lyell. Sponsel puts geology back into the story of species. More than this, this insightful book explores the deep, and often challenging, relationships between knowledge, theory, and publication in the world of nineteenth century science.”
— Janet Browne, Harvard University

“How difficult it is to recapture the young Charles Darwin, first navigating the shoals of scientific theorizing and authorship, long before he became the Darwin of legend. Yet in this engaging and original study, Alistair Sponsel accomplishes just that, delivering fresh insights into Darwin’s own evolution. Absolutely fascinating.”
— David Kaiser, Massachusetts Institute of Technology

“Darwin’s Evolving Identity is an excellent—indeed outstanding—work of scholarship, which makes major interventions in the literature on Darwin and his theory, as well as setting these interventions in a broader context that will draw interest well beyond the specific world of Darwin studies.”
— Jim Secord, University of Cambridge

"Darwin’s Evolving Identity, intended for both specialists and the general reader, is a highly accessible and strictly chronological narrative. Along the way, Sponsel makes several significant contributions to science studies and astute, timely interventions into longstanding historiographical issues regarding Darwin’s life and work."
— Gustave Lester

"Darwin’s Evolving Identity: Adventure, Ambition, and the Sin of Speculation is a subtle, scrupulous, and elegantly written book. While it makes important contributions to Darwin studies, it will also richly repay the attention of other scholars interested in the study of scientific practices."
— Greg Priest

"Sponsel’s book is a fine piece of scholarship in which he shows us just how deeply Darwin’s theorizing relied on the methods of scientific practice he employed."
— ISIS: A Journal of the History of Science Society

Alistair Sponsel is assistant professor of history at Vanderbilt University.