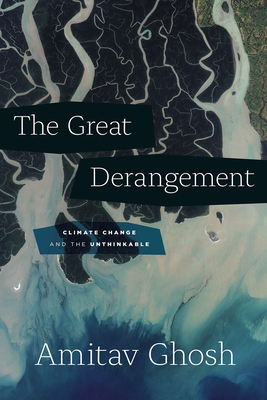 Are we deranged? The acclaimed Indian novelist Amitav Ghosh argues that future generations may well think so. How else to explain our imaginative failure in the face of global warming? In his first major book of nonfiction since In an Antique Land, Ghosh examines our inability—at the level of literature, history, and politics—to grasp the scale and violence of climate change.

The extreme nature of today’s climate events, Ghosh asserts, make them peculiarly resistant to contemporary modes of thinking and imagining. This is particularly true of serious literary fiction: hundred-year storms and freakish tornadoes simply feel too improbable for the novel; they are automatically consigned to other genres. In the writing of history, too, the climate crisis has sometimes led to gross simplifications; Ghosh shows that the history of the carbon economy is a tangled global story with many contradictory and counterintuitive elements.

Ghosh ends by suggesting that politics, much like literature, has become a matter of personal moral reckoning rather than an arena of collective action. But to limit fiction and politics to individual moral adventure comes at a great cost. The climate crisis asks us to imagine other forms of human existence—a task to which fiction, Ghosh argues, is the best suited of all cultural forms. His book serves as a great writer’s summons to confront the most urgent task of our time.

Praise For The Great Derangement: Climate Change and the Unthinkable (Berlin Family Lectures)…

"The interesting contribution of this book . . . is his indictment of the culture-makers. It has become unfashionable to seem too concerned. To make climate change the theme or setting of a novel, Ghosh writes, is 'to court eviction from the mansion in which serious fiction has long been in residence.' His bigger point is that we need a change of narrative. But to do this means that those who make our narratives need to lead the way, to bring their talents of storytelling to bear on what is, he writes, no less than an 'existential danger.'”

“Ghosh, who has previously broached environmental questions in fiction (The HungryTide, the Ibis trilogy, and elsewhere), here steps back from the role of storyteller to analyze modern literature, history, and politics. His purpose is to show that all three cultural modes share assumptions that render climate change unthinkable, occluding our view of its dangers rather than aiding our understanding. . . . To tackle climate change, we would need not only to overcome climate denialism and our reliance on fossil fuels, but also our commitment to moral uplift. The radical restructuring of global power requires more than a good conscience and respect for individuals. From this perspective, the humanities and human sciences confront their greatest challenge armed only with rusting tools forged for another age. ‘The climate crisis is,’ as Ghosh writes, ‘also a crisis of culture, and thus of the imagination.’”

“Ghosh is one of the most important living writers writing in English.”
— Los Angeles Review of Books

“A short but broad-ranging and consistently stimulating indictment of our era of the ‘great derangement.’ . . . The Great Derangement is a bracing reminder that there is no more vital task for writers and artists than to clear the intellectual dead wood of a vulgarly boosterish age and create space for apocalyptic thinking – which may at least delay, if not avert, the catastrophes ahead.”

“In his first work of long-form nonfiction in over 20 years, celebrated novelist Ghosh ‘perhaps the most important question ever to confront culture’: how can writers, scholars, and policy makers combat the collective inability to grasp the dangers of today’s climate crisis? Ghosh’s choice of genre is hardly incidental; among the chief sources of the ‘imaginative and cultural failure that lies at the heart of the climate crisis,’ he argues, is the resistance of modern linguistic and narrative traditions—particularly the 20th-century novel—to events so cataclysmic and heretofore improbable that they exceed the purview of serious literary fiction. . . . In this concise and utterly enlightening volume, Ghosh urges the public to find new artistic and political frameworks to understand and reduce the effects of human-caused climate change, sharing his own visionary perspective as a novelist, scholar, and citizen of our imperiled world.”

“The exciting and frightening thing about Ghosh’s argument is how he traces the novel’s narrow compass back to popular and influential scientific ideas—ideas that championed uniform and gradual processes over cataclysms and catastrophes. One big complaint about science —that it kills wonder—is the same criticism Ghosh levels at the novel: that it bequeaths us ‘a world of few surprises, fewer adventures, and no miracles at all.’ Lawfulness in biology is rather like realism in fiction: it is a convention so useful that we forget that it is a convention. But, if anthropogenic climate change and the gathering sixth mass extinction event have taught us anything, it is that the world is wilder than the laws we are used to would predict. Indeed, if the world really were in a novel—or even in a book of popular science—no one would believe it.”

“The Great Derangement . . . begins with a simple question—why have the arts (literature and fiction in particular) been unable and unwilling to grapple with the greatest crisis facing the planet, anthropogenic climate change?—and runs in thrillingly unpredictable directions with it.  . . . The Great Derangement bristles with trenchant and dense ideas, expressed with exemplary lucidity and finesse. At a time when the idea of the engagé intellectual is not just unfashionable, but in full-blown retreat, here is a book that triumphantly ­announces its return.”

“In this elegant book, Ghosh explains how literary fiction came to avoid depicting the uncanny, the nonhuman, the improbable, and the aggregate. His exploration of the relationship between British imperialism and Asia’s carbon economy shows that our constructions of history are as deranged as our literature. In short, we are in denial. . . . Ghosh finds hope in art’s tendency to envision possibilities, as well as in the activism of religious communities.”

“Resistance to the grim realities of climate change is so widespread that the crisis barely figures in literary fiction, notes writer Amitav Ghosh. Branding our era of denial and inertia the Great Derangement, Ghosh looks in turn at literature, history and politics to examine this failure, noting that extreme events such as 2012’s Hurricane Sandy are so freakish that they seem inexpressible. The solution, he argues, lies in collective action as well as scientific and governmental involvement — and in a resurgence in our imaginative capacity to envision human existence anew.”

“One of its central themes is that writers, artists and filmmakers, including himself, have largely ignored climate change—‘the great derangement’ of the title— simply because it seems too far-fetched and terrifying. But does it really make a difference if authors write about climate change? ‘Making a difference isn’t the point; the point is to examine the meaning of the arts. If we believe that the arts are meant to look ahead, open doors, then how is this huge issue of our time, absent from the arts? It’s like death, no one wants to talk about it.’”

“Ghosh’s latest book, The Great Derangement, is a j’accuse issued against all those literary writers who abdicated their social responsibility by being indifferent to the climate crisis—by far the greatest predicament facing humanity. . . . As The Great Derangement emphasises throughout, the crisis of language is at the heart of every human predicament. And now, if our writers are not leading the way, we’re more than doomed.”

“For a long time, we have been talking about climate change as a scientific question. In this magnificent book, Ghosh changes the conversation, moving it out of the narrow corridors of science and into the wide precincts of culture, politics, and power. Climate change, he argues, is the result of a set of interrelated histories that promoted and sustained our collective dependence on fossil fuels, and it is a kind of derangement to say we want a different world but act in a way that ensures the continuance of the present one. A clarion call not just to act on climate, but to think about it in a wholly new way.”
— Naomi Oreskes, author of The Collapse of Western Civilization: A View from the Future

“With the deftness of a master storyteller and the powerful vision of a keen political observer, Ghosh traces the complex ways that globalization, empire, and the bourgeois novel are entangled with the history of carbon and our contemporary climate crisis. A thrilling, often brilliant work of synthesis and imagination, The Great Derangement is essential reading for anyone trying to understand what the Anthropocene means for our human future.”

— Roy Scranton, author of Learning to Die in the Anthropocene: Reflections on the End of Civilization

“Ghosh’s analysis of the ‘era of climate change’ is fascinating, erudite, and unflinching. The Great Derangement is a profoundly original book that spares no one.”
— Elizabeth Kolbert, author of The Sixth Extinction: An Unnatural History

“Captivating. . . .The lightness and agility of Ghosh’s writing succeeds in keeping all  the urgency  and the shadows of something we cannot really look at: the destiny of mankind.”

“On very rare occasions, a writer marshals such searing insight and storytelling skill that even a well trodden subject is blown wide open. New connections are made, new futures appear. Ghosh is that kind of writer, and this is that kind of book.”
— Naomi Klein, author of This Changes Everything

“Ghosh has written brilliant fiction, impactful essays. But this work on climate change is the most transformational and powerful piece of writing to come from his pen. The Great  Derangement is a book on our burning planet for those who are burning it and are being burnt with it. Ghosh gives us, in scalding anguish, a masterpiece that reflects the Buddha’'s Adittapariyaya Sutta or ‘The Fire Sermon’ that T S Eliot so plangently re-affirmed in ‘The Waste Land.’ We have here a book that seeks to chastise, challenge, and change our brain's clogged circuitry.”

“For decades Ghosh has been telling us exquisite stories of unlikely human connection across geographical and historical boundaries. In The Great  Derangement he goes a step further and sets us amidst the great collectivity of a living and dying planet. This intensely lyrical work from a visionary writer at his best calls for a restitution of the sacred—in its most inclusive form—so that we can face the climate crisis of our times with our finest remaining resources.”

“A stupendous return to non-fiction. . . . Ghosh charts our progress, our cultures, history, politics, and its environmental fallout, as delicately and firmly as a Buddhist monk resolutely scattering coloured sand to create a mandala. Pixel by pixel, in distant corners of a canvas, he builds his arguments. Through the three sections of The Great Derangement, he carves a picture out of seemingly disparate global and local events and trends. And when you step back, slowly, inch by inch, a grander story is revealed—our story. We get to see a picture so grotesque and distorted that it is impossible to look away. And we look on, transfixed by a singular conclusion—climate change is on us.”

“…Ghosh argues that at the very time it is becoming clear that the situation is “in every sense a collective predicament”, we find ourselves living in the age of the individual.  The Great Derangement is a reminder that there are no more vital tasks for writers, artists and politicians than to confront the existential environmental crisis we face and imagine new ways of living.”
— Independent

Amitav Ghosh is an award-winning novelist and essayist whose books include The Circle of Reason, The Shadow Lines; In an Antique Land; Dancing in Cambodia; The Calcutta Chromosome; The Glass Palace; The Hungry Tide;  the Ibis Trilogy: Sea of Poppies, River of Smoke, and  Flood of Fire; and The Great Derangement, the latter also published by the University of Chicago Press.
Loading...
or support indie stores by buying on