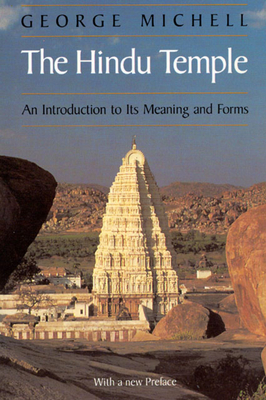 An Introduction to Its Meaning and Forms

For more than 1500 years, from the Indian subcontinent to the islands of the Indonesian archipelago, the temple has embodied and symbolized the Hindu worldview at its deepest level and inspired the greatest architectural and artistic achievements in Hindu Asia. In The Hindu Temple, considered the standard introduction to the subject, George Michell explains the cultural, religious, and architectural significance of the temple. He illustrates his points with a profusion of photographs, building plans, and drawings of architectural details, making the book a useful guide for travelers to Asia as well as an illuminating text for students of architecture, religion, and Asian civilizations.

Michell's discussion of the meaning and forms of the temple in Hindu society encompasses the awe-inspiring rock-cut temples at Ellora and Elephanta, the soaring superstructures and extraordinary sexual exhibitionism of the sculptures at Khajuraho, and the colossal mortuary temple of Angkor Vat, as well as the tiny iconic shrines that many Hindus wear around their necks and the simple shrines found under trees or near ponds.

George Michell is the author of Architecture of the Islamic World, Brick Temples of Bengal, and The Penguin Guide to the Monuments of India, Volume I. A native of Australia, he earned a Ph.D. in Indian archeology at the School of Oriental and African Studies, the University of London.
or
Buy Here
Copyright © 2020 American Booksellers Association