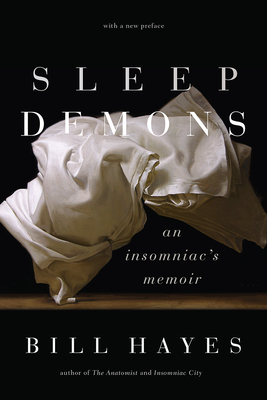 We often think of sleep as mere stasis, a pause button we press at the end of each day. Yet sleep is full of untold mysteries—eluding us when we seek it too fervently, throwing us into surreal dream worlds when we don’t, sometimes even possessing our bodies so that they walk and talk without our conscious volition. Delving into the mysteries of his own sleep patterns, Bill Hayes marvels, “I have come to see that sleep itself tells a story.”

An acclaimed journalist and memoirist—and partner of the late neurologist Oliver Sacks—Hayes has been plagued by insomnia his entire life. The science and mythology of sleep and sleeplessness form the backbone to Hayes’s narrative of his personal battles with sleep and how they colored his waking life, as he threads stories of fugitive sleep through memories of growing up in the closet, coming out to his Irish Catholic family, watching his friends fall ill during the early years of the AIDS crisis in San Francisco, and finding a lover. An erudite blend of science and personal narrative, Sleep Demons offers a poignant introduction to the topics for which Hayes has since become famous, including art, eros, city life, the history of medical science, and queer identity.

"What if the hum [of sleep] never comes? That's what writer and photographer Bill Hayes explores in his magnificent book Sleep Demons, part reflection on his own lifelong turmoil in the nocturne, part sweeping inquiry into the sometimes converging, sometimes colliding worlds of sleep research, psychology, medicine, mythology, aging, and mental health."
— Maria Popova

"An intelligent, beautifully written book, Hayes's curious hybrid will delight readers who snore past dawn as well as those who pace away while the midnight oil burns."
— Publishers Weekly

"Memoir, history, and science come together and apart again in a book that reads very much like a dream, switching genre and subject with a beautiful logic of its own, illuminated now and then with flashes of gorgeous insight. . . . Read this one, savor it, just don't take it to bed with you."
— Out magazine

"A graceful hybrid of a book that's half research treatise and half memoir about a gay man who grew up in a household steeped in forces of Ireland, Catholicism, and the military, this beautiful book seems just compensation for all his wakeful hours."
— Entertainment Weekly

"Hayes's steady tone--learned, friendly, and wry--creates an impressive unity throughout. He manages to treat even the complex arcana of the science world's attempts to understand sleep and sleeplessness in refreshing, lucid prose. By encapsulating his coming-out and queer-sex stories within the overarching theme of sleeplessness, Hayes pushes the borders of gay autobiography, giving new life to a powerful genre. . . . Who knew insomnia could be so much fun?"
— Kirkus Reviews

"By leavening the personal with the scientific, Bill Hayes avoids that navel-gazing common to many life stories. Hayes has created something that goes beyond mere memoir; call it obsessional autobiography. . . . [His] polished writing and fearless revelations make it work beautifully."
— San Francisco Chronicle

"Sleep Demons is a lovely weave of memory and science, great characters and compassionate humor. Insomniacs will love it for the sense of connection and solution; the rest of you (grrr) for its wisdom and wonderful writing."
— Anne Lamott, author of Bird by Bird

"Like the most rewarding kind of travel writer, Bill Hayes is both informative and personal as he takes us through the borderlands of sleep and waking, mysterious yet familiar. I'm grateful for the way this intimate, reflective, and factual guidebook captures the feeling of that terrain."
— Robert Pinsky

Bill Hayes is a Guggenheim Fellow and an acclaimed journalist, photographer, and memoirist. His other works include Insomniac City: New York, Oliver Sacks, and Me, The Anatomist: A True Story of Gray’s Anatomy, and Five Quarts: A Personal and Natural History of Blood.