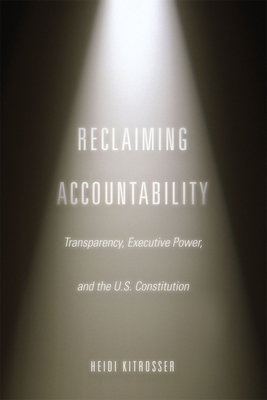 Americans tend to believe in government that is transparent and accountable. Those who govern us work for us, and therefore they must also answer to us. But how do we reconcile calls for greater accountability with the competing need for secrecy, especially in matters of national security? Those two imperatives are usually taken to be antithetical, but Heidi Kitrosser argues convincingly that this is not the case—and that our concern ought to lie not with secrecy, but with the sort of unchecked secrecy that can result from “presidentialism,” or constitutional arguments for broad executive control of information.

In Reclaiming Accountability, Kitrosser traces presidentialism from its start as part of a decades-old legal movement through its appearance during the Bush and Obama administrations, demonstrating its effects on secrecy throughout. Taking readers through the key presidentialist arguments—including “supremacy” and “unitary executive theory”—she explains how these arguments misread the Constitution in a way that is profoundly at odds with democratic principles. Kitrosser’s own reading offers a powerful corrective, showing how the Constitution provides myriad tools, including the power of Congress and the courts to enforce checks on presidential power, through which we could reclaim government accountability.

“Secrecy breeds power, and power demands secrecy. Kitrosser shows how this dynamic has changed the American presidency and threatened our democracy. She provides a nuanced and compelling diagnosis of the problem secrecy creates and concrete proposals for how to get accountability back.”
— David Cole, Georgetown University Law Center

"In Reclaiming Accountability, Kitrosser examines how theories of presidential supremacy and of a unitary executive have undermined accountability by encouraging unchecked secrecy. Her analysis deftly applies constitutional history and theory to many contemporary assertions of presidential power. Every chapter rewards the reader by providing detailed information, nuanced arguments and telling insights. Kitrosser speaks to researchers, legislators, transparency advocates, and to anyone troubled by  the risks to democratic governance posed by limited executive accountability. She gives us much to consider and much to do."
— Robert G. Vaughn, American University, Washington College of Law

"Over the years, Kitrosser has provided sound and insightful analysis about the damage done to government by executive branch secrecy and inflated presidential power. In Reclaiming Accountability, she directs her research to the steps needed to restore constitutional government, the system of checks and balances, and the Framers' faith in self-government that is rooted in voters sending their representatives to Congress. An important and thoughtful book."
— Louis Fisher, the Constitution Project, author of The Law of the Executive Branch

"Those of us concerned with the steady and apparently irresistible growth of presidential administration will find in Kitrosser's brilliant book a thoughtful response, thoroughly grounded in original understandings, to the overstatements of the constitutional arguments claimed to support it, and a careful exposition of counter-arguments that could help to curb it. Rich with detail and examples, she shows how the arguments for presidential accountability, well grounded in our Constitution, support neither presidential supremacy nor the stronger forms of argument for a unitary executive, but rather one in which executive secrecy and command are contained by law. The laws whose faithful execution the President is obliged to assure assign duties to others than himself, and unless he is the absolute monarch the authors of our Constitution clearly rejected, those assignments must be a part of the law whose faithful execution he is responsible for. Kitrosser's welcome analysis suggests how this might be accomplished."
— Peter. L. Strauss, Columbia Law School

"One of the deeply satisfying features of Kitrosser’s book (which is a work of scholarship, not a polemic) is her scrupulous and nuanced presentation of the presidential supremacist perspective. Her purpose is not to ridicule its weakest arguments, but to engage its strongest ones . . . . [Kitrosser's] book adds analytical rigor and insight to current debates over secrecy and accountability, which it ultimately aims to inspire and inform."
— Secrecy News

"Kitrosser recommends that we recommit ourselves to the basic constitutional framework for limiting presidential war powers. For Kitrosser, what is at stake in the ongoing contest to limit presidential power is information. Under the guise of protecting the nation’s security, presidents have seized—just as Congress and the courts have ceded—all manner of information about the communications, plans, and travel of citizens and noncitizens alike."
— Boston Review

“Essential. . . . This book should be considered a must read by anyone interested in presidential power, secrecy, and law.  Kitrosser . . . provides a rich and thoughtful review of the conceptual origins of presidential power advocacy and the rationale for employing a substantive accountability framework. . . . Her conclusions on moving forward provide readers with interesting and thought-provoking ways to counter the aggressive and imperious forms of presidential supremacy in action.”
— Choice

“Kitrosser . . . zeroes in on a central component of executive power—the use and abuse of secrecy—as a linchpin of executive power abuse. . . . [Her] larger argument that secrecy is the root enemy of accountability, and the antidote to power abuse, is persuasive and important.”
— Congress and the Presidency

“There are many reasons for executive branch dominance, and Kitrosser’s excellent new book, Reclaiming Accountability, deals with one of them: the president’s control over the flow of information. . . . Kitrosser argues that an answer to the excessive presidential power may be found in what she calls the ‘substantive accountability framework’ of the Constitution.”
— Library of Law and Liberty

“Those made uneasy by the tendency among modern American presidents to make ever-expanding claims to constitutional supremacy should welcome this thoughtful and provocative book.”

Heidi Kitrosser is professor of law at the University of Minnesota.
Loading...
or
Not Currently Available for Direct Purchase