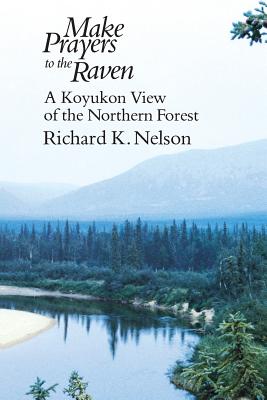 Make Prayers to the Raven (Paperback)

A Koyukon View of the Northern Forest

"Nelson spent a year among the Koyukon people of western Alaska, studying their intimate relationship with animals and the land. His chronicle of that visit represents a thorough and elegant account of the mystical connection between Native Americans and the natural world."--Outside "This admirable reflection on the natural history of the Koyukon River drainage in Alaska is founded on knowledge the author gained as a student of the Koyukon culture, indigenous to that region. He presents these Athapascan views of the land--principally of its animals and Koyukon relationships with those creatures--together with a measured account of his own experiences and doubts. . . . For someone in search of a native American expression of 'ecology' and natural history, I can think of no better place to begin than with this work."--Barry Lopez, Orion Nature Quarterly "Far from being a romantic attempt to pass on the spiritual lore of Native Americans for a quick fix by others, this is a very serious ethnographic study of some Alaskan Indians in the Northern Forest area. . . . He has painstakingly regarded their views of earth, sky, water, mammals and every creeping thing that creepeth upon the earth. He does admire their love of nature and spirit. Those who see the world through his eyes using their eyes will likely come away with new respect for the boreal forest and those who live with it and in it, not against it."--The Christian Century "In Make Prayers to the Raven Nelson reveals to us the Koyukon beliefs and attitudes toward the fauna that surround them in their forested
habitat close to the lower Yukon. . . . Nelson's presentation also gives rich insights into the Koyukon subsistence cycle through the year and into the hardships of life in this northern region. The book is written with both brain and heart. . . . This book represents a landmark: never before has the integration of American Indians with their environment been so well spelled out."--Ake Hultkrantz, Journal of Forest History
or support indie stores by buying on
Copyright © 2020 American Booksellers Association