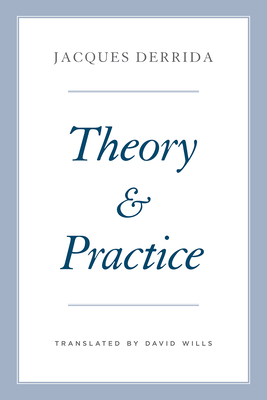 Theory and Practice (The Seminars of Jacques Derrida)

Theory and Practice is a series of nine lectures that Jacques Derrida delivered at the École Normale Supérieure in 1976 and 1977. The topic of “theory and practice” was associated above all with Marxist discourse and particularly the influential interpretation of Marx by Louis Althusser. Derrida’s many questions to Althusser and other thinkers aim at unsettling the distinction between thinking and acting.

Derrida’s investigations set out from Marx’s “Theses on Feuerbach,” in particular the eleventh thesis, which has often been taken as a mantra for the “end of philosophy,” to be brought about by Marxist practice. Derrida argues, however, that Althusser has no such end in view and that his discourse remains resolutely philosophical, even as it promotes the theory/practice pair as primary values. This seminar also draws fascinating connections between Marxist thought and Heidegger and features Derrida’s signature reconsideration of the dichotomy between doing and thinking. This text, available for the first time in English, shows that Derrida was doing important work on Marx long before Specters of Marx. As with the other volumes in this series, it gives readers an unparalleled glimpse into Derrida’s thinking at its best—spontaneous, unpredictable, and groundbreaking.


Praise For Theory and Practice (The Seminars of Jacques Derrida)…

"For Anglophone readers who view deconstruction as a set of arguments about language and literature or see Derrida’s early 1990s exploration of Marxism as weak and belated, Theory and Practice is enlightening."
— Los Angeles Review of Books

"Wills’s nuanced, word-play-sensitive translation includes foreign terms for those with ears to hear the etymological associations so important to Derrida’s arguments and presents a crisp, clear, elegant statement of the author’s text. . . . Summing Up: Recommended."
— CHOICE

Geoffrey Bennington is the Asa G. Candler Professor of Modern French Thought at Emory University. He is the author of several books on Derrida and translator of many others by him, and he is coeditor of The Seminars of Jacques Derrida series.

Peggy Kamuf is the Marion Frances Chevalier Professor of French and Comparative Literature at the University of Southern California. She has written, edited, or translated many books, by Derrida and others, and is coeditor of the series of Derrida’s seminars at the University of Chicago Press.
Loading...
or
Not Currently Available for Direct Purchase