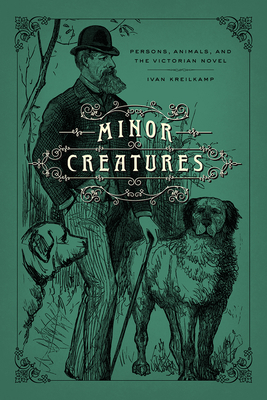 In the nineteenth century, richly-drawn social fiction became one of England’s major cultural exports. At the same time, a surprising companion came to stand alongside the novel as a key embodiment of British identity: the domesticated pet. In works by authors from the Brontës to Eliot, from Dickens to Hardy, animals appeared as markers of domestic coziness and familial kindness. Yet for all their supposed significance, the animals in nineteenth-century fiction were never granted the same fullness of character or consciousness as their human masters: they remain secondary figures. Minor Creatures re-examines a slew of literary classics to show how Victorian notions of domesticity, sympathy, and individuality were shaped in response to the burgeoning pet class. The presence of beloved animals in the home led to a number of welfare-minded political movements, inspired in part by the Darwinian thought that began to sprout at the time. Nineteenth-century animals may not have been the heroes of their own lives but, as Kreilkamp shows, the history of domestic pets deeply influenced the history of the English novel.

“We all know the Victorians invented a characteristic idea of domesticity along with a characteristic form of fiction. What none of us knew, until Kreilkamp’s elegant interpretations of writers ranging from Darwin to Carroll to Hardy, is how entangled the realist novel was with something more specific: the domestication of nonhuman animals. Showing surprisingly but irrefutably that Victorian narrative structures both respond to and forge a new understanding of what humans do with, for, and to other species—whether bred, beaten, eaten, pitied, identified with, or cared for—Minor Creatures models a new method for understanding the relation between culture and literary form.”
— Leah Price, Harvard University

“Minor Creatures asks how and why precarious, provisional beings without human speech, accessible subjectivity, or legal rights had such paradoxically generative effects on the realistic novel. In this richly theorized, deeply compassionate exploration of Victorian ‘semihuman’ ‘semicharacters,’ Kreilkamp makes it impossible to ignore that ‘beating of a squirrel’s heart’ that marginally, consistently, and productively threatened the anthropocentric obliviousness of Victorian fiction and its readers.”
— Teresa Mangum, University of Iowa

“In this careful and compassionate book, Kreilkamp shows what’s been hiding in plain sight all along: the central and, indeed, the structuring role that domesticated animals play in Victorian narrative realism. Minor Creatures explores a complex and pervasive ecosystem that supports birds, cats, dogs, and literary characters in equal measure. Thanks to its conceptual rigor, historical detail, and critical acuity, Kreilkamp reveals the humble household pet as an unexpected best friend to the literary logics on which the realist novel fundamentally depends.”
— Kent Puckett, University of California, Berkeley

“In lucid prose, via a series of always compelling and often luminous readings, Kreilkamp demonstrates the indispensability of animals to the work of Victorian realist fiction.”

“A wide-ranging reassessment of Victorian animals as humans began to radically change how they viewed them.”
— Los Angeles Review of Books

"Ivan Kreilkamp’s wonderful Minor Creatures: Persons, Animals, and the Victorian Novel offers a richly textured account of literary animals that marries historical and biographical detail with theoretically nuanced analysis to bring us up-to-date with animal studies.... [His] approach... allows him to shed a truly original light on a well-worn image, presenting it as highly representative of the role animal lives and bodies play in Victorian ?ction."

"[T]his is an important book that undertakes the much-needed work of reorienting our understanding of Victorian realism towards its dependence on nonhuman life. It makes a persuasive and original argument for understanding animal ownership, domesticity, and the novel as inextricably intertwined cultural forms in nineteenth-century Britain, and as such will be of vital interest not only to those who work in animal studies, but also to scholars of novel theory and Victorian literature and culture."
— Studies in the Novel
or
Buy Here
Copyright © 2020 American Booksellers Association