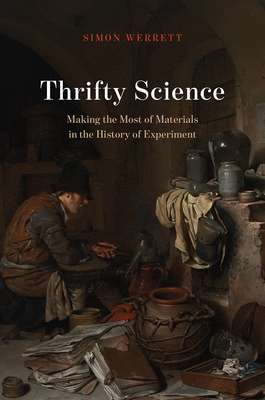 Making the Most of Materials in the History of Experiment

If the twentieth century saw the rise of “Big Science,” then the seventeenth and eighteenth centuries were surely an age of thrift. As Simon Werrett’s new history shows, frugal early modern experimenters transformed their homes into laboratories as they recycled, repurposed, repaired, and reused their material possessions to learn about the natural world.

Thrifty Science explores this distinctive culture of experiment and demonstrates how the values of the household helped to shape an array of experimental inquiries, ranging from esoteric investigations of glowworms and sour beer to famous experiments such as Benjamin Franklin’s use of a kite to show lightning was electrical and Isaac Newton’s investigations of color using prisms. Tracing the diverse ways that men and women put their material possessions into the service of experiment, Werrett offers a history of practices of recycling and repurposing that are often assumed to be more recent in origin. This thriving domestic culture of inquiry was eclipsed by new forms of experimental culture in the nineteenth century, however, culminating in the resource-hungry science of the twentieth. Could thrifty science be making a comeback today, as scientists grapple with the need to make their research more environmentally sustainable?


Praise For Thrifty Science: Making the Most of Materials in the History of Experiment…

"Werrett hopes to contribute to thinking about the future of science by charting attitudes and practices that encouraged the stewardship of materials in seventeenth- and eighteenth-century English natural philosophy. He does so in eight well-written chapters, larded with entertaining and enlightening accounts of how early modern natural philosophers used household items and recycled materials to perform their experiments. . . . The book offers an excellent historical context for practices and changes that are assumed to be novel but emerge from historical traditions and gives readers a wonderful insight into the material world of early modern science in England."
— Isis: A Journal of the History of Science Society

"Werrett coined the title phrase to encapsulate how early modern European experimenters placed the materials they employed within their overall understanding of proper stewardship of a household. For instance, they used the same substances, objects, and rooms for multiple purposes. Items were reused, repaired, and recycled. Practitioners esteemed improvisation and substitution, and secondhand markets existed. Werrett views these activities as part of an ethos of 'oeconomy,' or household management, that was especially noticeable in 17th- and 18th-century England. The book thus brings together references to thrift in natural philosophy from a few hundred primary sources, including publications and manuscripts by experimenters, periodicals, and manuals of domestic life. Werrett argues that an appreciation for thrift continued into the 19th century, even though experiment moved from the home to the laboratory, specialized instruments were adopted, waste was increasingly accepted, and generally the value system became one of "economy." He also suggests that thrifty practices may be coming back into use as scientists pursue sustainability. His aim is to provoke conversation and further, deeper research by historians and to offer insights to students interested in the history of science. . . . Recommended. All readers."
— CHOICE

"Many students of science spend a fair bit of time learning about the theorists and experimentalists of the seventeenth and eighteenth centuries. Yet it can be hard to picture these figures through the layers of historical scholarship and popular accounts. . . .  Simon Werrett's Thrifty Science is, among other things, a lively attempt to show another side of these figures and their era."
— Nature

"Complex and significant . . . . Overall, Werrett's book is well researched and well executed, using a wide range of primary sources and secondary literature. Thrifty Science is a valuable contribution to the literature in the history of early modern science, and provides an important approach to the materials, places, and values that were so central in the experimental sciences, which prioritized a blend of theory and practice. It is critical to remember that early modern experimenters could, and did, make use of almost anything."
— H-Net Reviews

"An engaging and original study about how we can re-learn what we have lost (in several senses) from older societies’ handling of material culture."
— Journal of the History of Medicine and Allied Sciences

"Thrifty Science takes the reader on a fascinating and novel tour of early modern science, wending its way through homes and gardens, auction houses, and instrument shops. . . . The book is foremost a contribution to the growing literature on the material culture and practice of science, with an analysis rooted in notions of circulation. At the same time, it speaks eloquently to recent work on the early modern home, convincingly locating many of the thrifty practices of science in ideas of economy and the management of the household. Canonical figures like Robert Boyle, Robert Hooke, and Isaac Newton thus naturally appear, but the focus on the home also opens up a more diverse cast of men and women, including family members and domestic servants, as participants in early modern science. . . . The variety and depth of sources on display is prodigious, and the book is richly illustrated with judiciously chosen images. . . . This is an excellent and thought-provoking book that will appeal especially to scholars of early modern science, historians of technology, and those with interests in economy and the household. Thrifty Science nevertheless speaks lucidly to much broader questions around sustainability and the nature of our relationship with material things. Written in a lively and engaging manner, it thus can and should be read much more widely."
— Technology and Culture

"A very fine history of the material culture of experimental practice that reevaluates the common narrative that dedicated and specialized spaces and instruments were completely representative of early modern 'science.' . . . A stimulating and illuminating book."
— American Historical Review

"Ranges from the sixteenth to the nineteenth century, with astute comments about the present and the future. Of course Star Wars is all about recycling! Seriously, it 'recontextualises early modern science in the material culture of the home' (p. 5) and charts the emergence of 'thrifty science,' and, in due  course, its counterpart, 'economic science'. . . . Substantial, innovative, charming, expansive."
— Endeavour

"Simon Werrett’s sprightly book documents the importance of repair, reuse, and recycling in early-modern science.  By examining how materials and apparatus were continuously adapted for new uses, he shows how scientific experiment was part of domestic oeconomy.  He has foraged widely in textual, visual, and material evidence to recover a history that has been largely forgotten in our age of throwaway consumption.  The book will appeal both to historians and to those who are concerned about the sustainability of today’s scientific practices."
— Jan Golinski, University of New Hampshire

Simon Werrett is a senior lecturer in history of science in the Department of Science and Technology Studies at University College London and the author of Fireworks: Pyrotechnic Arts and Sciences in European History, also published by the University of Chicago Press.
Loading...
or
Not Currently Available for Direct Purchase