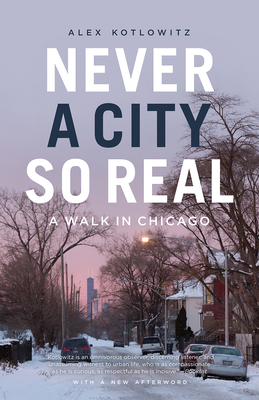 Never a City So Real (Paperback)

A Walk in Chicago (Chicago Visions and Revisions)

“Chicago is a tale of two cities,” headlines declare. This narrative has been gaining steam alongside reports of growing economic divisions and diverging outlooks on the future of the city. Yet to keen observers of the Second City, this is nothing new. Those who truly know Chicago know that for decades—even centuries—the city has been defined by duality, possibly since the Great Fire scorched a visible line between the rubble and the saved. For writers like Alex Kotlowitz, the contradictions are what make Chicago. And it is these contradictions that form the heart of Never a City So Real.

The book is a tour of the people of Chicago, those who have been Kotlowitz’s guide into this city’s – and by inference, this country’s – heart.  Chicago, after all, is America’s city. Kotlowitz introduces us to the owner of a West Side soul food restaurant who believes in second chances,  a steelworker turned history teacher, the “Diego Rivera of the projects,” and the lawyers and defendants who populate Chicago’s Criminal Courts Building.  These empathic, intimate stories chronicle the city’s soul, its lifeblood.

This new edition features a new afterword from the author, which examines the state of the city today as seen from the double-paned windows of a pawnshop. Ultimately, Never a City So Real is a love letter to Chicago, a place that Kotlowitz describes as “a place that can tie me up in knots but a place that has been my muse, my friend, my joy.”

Alex Kotlowitz is the award-winning author of four books, including the national best-seller There Are No Children Here, and, most recently, An American Summer. His work has appeared in the New Yorker, in New York Times Magazine, and on This American Life. He teaches at Northwestern University’s Medill School of Journalism.

Praise For Never a City So Real: A Walk in Chicago (Chicago Visions and Revisions)…

“Kotlowitz is an omnivorous observer, discerning listener, and unassuming witness to urban life. . . . (Never a City So Real) is clear-eyed testimony to his great affection for this no-nonsense city and his infinite fascination with humankind.”
— Praise for the previous edition

“Kotlowitz uses his immense skill for capturing the stories of those who are often overlooked to paint a compelling portrait of one of America’s iconic capitals.”
— O Magazine

“This is a fine successor to Nelson Algren’s Chicago: City on the Make as a song to our rough-and-tumble, broken-nosed city.”
— Chicago Sun-Times
or support indie stores by buying on
Copyright © 2020 American Booksellers Association