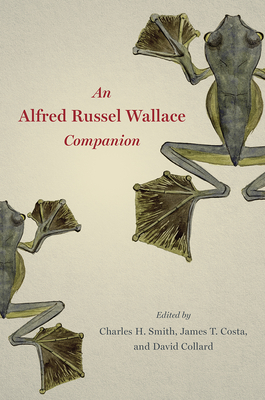 Although Alfred Russel Wallace (1823–1913) was one of the most famous scientists in the world at the time of his death at the age of ninety, today he is known to many as a kind of “almost-Darwin,” a secondary figure relegated to the footnotes of Darwin’s prodigious insights. But this diminution could hardly be less justified. Research into the life of this brilliant naturalist and social critic continues to produce new insights into his significance to history and his role in helping to shape modern thought.

Wallace declared his eight years of exploration in southeast Asia to be “the central and controlling incident” of his life. As 2019 marks one hundred and fifty years since the publication of The Malay Archipelago, Wallace’s canonical work chronicling his epic voyage, this collaborative book gathers an interdisciplinary array of writers to celebrate Wallace’s remarkable life and diverse scholarly accomplishments. Wallace left school at the age of fourteen and was largely self-taught, a voracious curiosity and appetite for learning sustaining him throughout his long life. After years as a surveyor and builder, in 1848 he left Britain to become a professional natural history collector in the Amazon, where he spent four years. Then, in 1854, he departed for the Malay Archipelago. It was on this voyage that he constructed a theory of natural selection similar to the one Charles Darwin was developing, and the two copublished papers on the subject in 1858, some sixteen months before the release of Darwin’s On the Origin of Species.

But as the contributors to the Companion show, this much-discussed parallel evolution in thought was only one epoch in an extraordinary intellectual life. When Wallace returned to Britain in 1862, he commenced a career of writing on a huge range of subjects extending from evolutionary studies and biogeography to spiritualism and socialism. An Alfred Russel Wallace Companion provides something of a necessary reexamination of the full breadth of Wallace’s thought—an attempt to describe not only the history and present state of our understanding of his work, but also its implications for the future.

"This collection of twelve essays sets out to reexamine the full breadth of Wallace’s thought—a tall order for a man whose working life reached from the early years of Victoria to the eve of World War I and who published on economics and social reform alongside natural history and geography and speculated on the far future of humankind as well as on the possible existence of alien life. . . . It is a kaleidoscopic treatment befitting a kaleidoscopic life."
— Isis

"Crackpot or passionate polymath? History has tended to put Wallace in the former category, but one lesson that I have learned from the Companion is that he belongs solidly in the latter one. Well informed, persistently rigorous, and inventive in his thinking, and unfailingly compassionate, Wallace was the prototypical socially engaged scientist. He is—or at least should be—an inspiration to us all."
— Current Biology

"This volume is a good introduction to Wallace and his thinking, and I recommend it to anyone who wants an overall picture of one of the more fascinating figures of 19th-century science."
— Michael Ruse

"This book shows the majesty of Wallace’s eclectic mind; it is well researched and well written...This work is a valuable, and most appropriate, contribution to Wallace scholarship."
— Patrick Armstrong

"The Companion is superbly edited and features essays describing how Wallace collected natural history specimens, developed a theory of evolution by natural selection, and helped establish the field of biogeography. . . . The volume includes several more essays about the influences that shaped Wallace's views on human evolution, and one about his role as a social critic that exposes certain mere controversial aspects of his career. Ideally suited for historians of natural history. Highly recommended."
— Choice

“An Alfred Russel Wallace Companion is a truly comprehensive examination of the ruminations and writings of one of the most remarkable men of the Victorian era, the co-discoverer of the theory of natural selection with Charles Darwin. This book is so thorough in its analysis of a protean mind that it is difficult to imagine that it will or can be surpassed. Anyone interested in the history of science, and in particular evolutionary theory and the foundations of biogeography, will find this collection of essays enlightening and thought-provoking. Even at his least convincing, his embrace of Spiritualism and anti-vaccinationism, Wallace the revolutionary is evident. The authors rightly argue that his concerns for social justice, the degradation of the planet, and humans’ place in the universe make him relevant today, even if some of his ideas, based on the best data available to him at the time, may be outdated.”
— Ross A. Slotten, author of "The Heretic in Darwin’s Court: The Life of Alfred Russel Wallace"

“Given the disparate nature of its subject’s intellectual pursuits, this collection of scholarship on Wallace is inevitably eclectic. Usefully synthetic, it provides the hugely significant service of bringing together many disparate strands of Wallaceana in a single location. Wallace has a special need for this kind of treatment because of the breadth of his interests. If you’re interested in Darwin, you need only check out the history of biology literature; if, however, you’re interested in Wallace, you are compelled to hunt up references in far-flung areas—in the history of biology, history of medicine, history of economics, and in political history. An Alfred Russel Wallace Companion brings all this together in one place.”
— Andrew Berry, Harvard University, editor of "Infinite Tropics: An Alfred Russel Wallace Anthology"

“Although, as a biogeographer, I have taken an interest in Wallace for many years, I learned a great many new things about him and his times by reading these chapters, both in terms of details and of broad issues. He was quite a remarkable individual, and certainly deserves far more attention than he has received in recent decades. This book should do much to rectify that lack of attention. It will quickly come to represent a major milestone in what we know about Wallace and his contributions.”
— Lawrence R. Heaney, Negaunee Curator of Mammals, Field Museum of Natural History

Charles H. Smith is professor emeritus at Western Kentucky University. Most recently, he is coeditor of Dear Sir: Sixty-Nine Years of Alfred Russel Wallace Letters to the Editor. James T. Costa is executive director of the Highlands Biological Station and professor of biology at Western Carolina University. Most recently, he is the author of Darwin’s Backyard: How Small Experiments Led to a Big Theory. David Collard is professor emeritus of economics at the University of Bath where he has headed up the Economics Group since 1978. He has published research on the economics of altruism, welfare, and taxation. Some of his contributions to the history of economics are collected in Generations of Economists.
Loading...
or
Not Currently Available for Direct Purchase