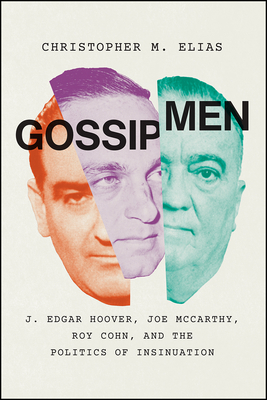 J. Edgar Hoover, Joseph McCarthy, and Roy Cohn were titanic figures in midcentury America, wielding national power in government and the legal system through intimidation and insinuation. Hoover’s FBI thrived on secrecy, threats, and illegal surveillance, while McCarthy and Cohn will forever be associated with the infamous anticommunist smear campaign of the early 1950s, which culminated in McCarthy’s public disgrace during televised Senate hearings. In Gossip Men, Christopher M. Elias takes a probing look at these tarnished figures to reveal a host of startling new connections among gender, sexuality, and national security in twentieth-century American politics. Elias illustrates how these three men solidified their power through the skillful use of deliberately misleading techniques like implication, hyperbole, and photographic manipulation. Just as provocatively, he shows that the American people of the 1950s were particularly primed to accept these coded threats because they were already familiar with such tactics from widely popular gossip magazines.

By using gossip as a lens to examine profound issues of state security and institutional power, Elias thoroughly transforms our understanding of the development of modern American political culture.

“This finely crafted book, based on meticulous use of archival records, satisfies on many levels and sheds light on often overlooked history. . . . Elias adeptly details the Lavender Scare of the mid-20th century, and the lasting impact of the use of fabrication and hyperbole.”
— Library Journal (starred review)

“A juicy introduction to three of the most controversial figures in 20th-century American politics. . . . Well-researched and stimulating. . . Elias vividly describes the era’s political battles, tabloid magazines, and dramatic Senate hearings, and persuasively identifies the influence of the “surveillance state masculinity” embodied by his three subjects on the political rise of Donald Trump.”
— Publishers Weekly

“This may be a case of scholarship catching up with James Ellroy, whose novel American Tabloid pursued that thesis with all due imaginative embellishment.”
— Inside Higher Education

“Gossip Men is a fast-paced and absorbing account of how the men who were most vulnerable to gossip about their sexuality—Joseph McCarthy, Roy Cohn, and J. Edgar Hoover—rose to power by mastering the art of masculine performance. As the United States struggles once again with the perils of political manhood, Elias reminds us that alpha-male conservatism was born in a Cold War information economy where gossip, rumor, and innuendo were weapons—but also assets to a career.”
— Claire Potter, The New School for Social Research

“Gossip Men is a terrific book about a trio of fascinating (if not necessarily terrific) political men. Hoover, McCarthy, and Cohn helped to create the modern security state. As this book shows, they also helped to create—and were created by—fierce public and private contests over masculinity, sexuality, and secrecy. Gossip Men is an important cultural history and a thoroughly engaging read.”
— Beverly Gage, Yale University

“Gossip Men is compellingly written and fun to read from beginning to end. Elias tracks the emergence of surveillance state masculinity and highlights the role of the gossip industry in its creation and reproduction in a novel way, excellently integrating biography, media studies, and history.”
— Shanon Fitzpatrick, McGill University

Christopher M. Elias is visiting assistant professor of history and American studies at St. Olaf College.
Loading...
or support indie stores by buying on
(This book is on backorder)