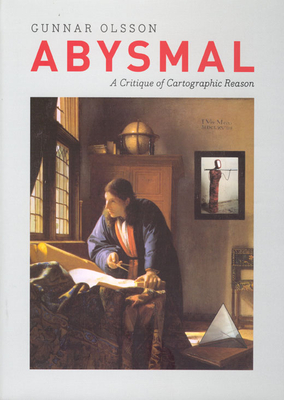 A Critique of Cartographic Reason

People rely on reason to think about and navigate the abstract world of human relations in much the same way they rely on maps to study and traverse the physical world. Starting from that simple observation, renowned geographer Gunnar Olsson offers in Abysmal an astonishingly erudite critique of the way human thought and action have become deeply immersed in the rhetoric of cartography and how this cartographic reasoning allows the powerful to map out other people’s lives.

A spectacular reading of Western philosophy, religion, and mythology that draws on early maps and atlases, Plato, Kant, and Wittgenstein, Thomas Pynchon, Gilgamesh, and Marcel Duchamp, Abysmal is itself a minimalist guide to the terrain of Western culture. Olsson roams widely but always returns to the problems inherent in reason, to question the outdated assumptions and fixed ideas that thinking cartographically entails. A work of ambition, scope, and sharp wit, Abysmal will appeal to an eclectic audience—to geographers and cartographers, but also to anyone interested in the history of ideas, culture, and art.


Praise For Abysmal: A Critique of Cartographic Reason…

“The appearance of a new book by Gunnar Olsson is a matter of considerable intellectual excitement, and here we have the culmination of his decades-long exploration of the deep structure—the grammar—of human thought and action. The result is a compelling and inspiring analysis of cartographic reason and its limits, of how maps and mapping serve as forms of reasoning which contain within them all the fixed points and taken for granted assumptions about what it means to be human. With Abysmal Olsson has sketched an atlas of the human condition—it is a quite remarkable work, vast in scope and ambition.”

“Abysmal is the career summation of a geographer extraordinaire who through a combination of play, experiment, erudition, and a deeply humanistic sensibility has held up geography’s end in the epoch-defining period of critical thought and philosophy of the recent past. This book, through its many plays on the idea of the map and mapping, is a magisterial expression of not only Olsson’s legacy but of the legacy of that entire period which infuses so much of what the human sciences are still capable in a time of fear and anticipation.”--George Marcus, University of California, Irvine
— George Marcus

"In Abysmal, we encounter an author we have known for years as one who always stimulates new thinking, pushes us to understand in different registers, and unsettles the all too easy fixings of meaning with which we so often work. . . . This is an outstanding work. . . . Throughout the writing exudes a captivating playfulness and pleasure. Even though the manuscript is long, the writing is clear, even spare, and always crisply analytical. Arguments are carefuly developed with rich, evocative analysis and fascinating (at times humorous) authorial comment and aside. Throughout, this is a work of erudition, a tightly woven fabric of precision. . . . It contantly probes and opens new lines of flight, new possibilities for thinking thought-and-action. It became for me a kind of magical toolbox; providing this or that insight which helped focus issues that had earlier been only vaguely perceived."
— John Pickles

"An important contribution to the philosophy of geography in general and the discussion of the dominant 'cartographic reason' in Western society in particular. . . . [The author's] cartographic analogies and metaphors can only enrich the recent debates on how to rethink maps and the human dimensions of cartography."
— J. Seeman

"A spectacular reading of Western philosophy, religion, and mythology that draws on early maps and atlases, Plato, Kant, Wittgenstein, Thomas Pynchon, Gilgamesh, and Marcel Duchamp entices Olsson to wander widely but always return to the problems inherent in reason, to question the outdated assumptions and fixed ideas that thinking cartographically entails. A work of ambition, scope, and sharp wit, Abysmal will appeal to an eclectic audience--to geographers and cartographers, but also to anyone interested in the history of ideas, culture, and art."
— Vivian Louis Forbes

Gunnar Olsson is professor emeritus of geography at Uppsala University, Sweden. He is the author of ten books in Swedish and English.
Loading...
or
Not Currently Available for Direct Purchase