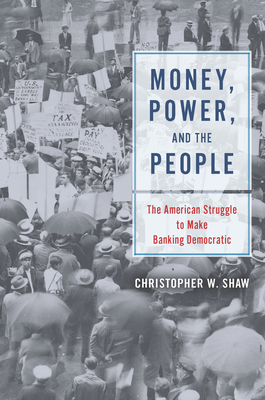 Money, Power, and the People

Banks and bankers are hardly the most beloved institutions and people in this country. With its corruptive influence on politics and stranglehold on the American economy, Wall Street is held in high regard by few outside the financial sector. But the pitchforks raised against this behemoth are largely rhetorical: we rarely see riots in the streets or public demands for an equitable and democratic banking system that result in serious national changes.

Yet the situation was vastly different a century ago, as Christopher W. Shaw shows. This book upends the conventional thinking that financial policy in the early twentieth century was set primarily by the needs and demands of bankers. Shaw shows that banking and politics were directly shaped by the literal and symbolic investments of the grassroots. This engagement remade financial institutions and the national economy, through populist pressure and the establishment of federal regulatory programs and agencies like the Farm Credit System and the Federal Deposit Insurance Corporation. Shaw reveals the surprising groundswell behind seemingly arcane legislation, as well as the power of the people to demand serious political repercussions for the banks that caused the Great Depression. One result of this sustained interest and pressure was legislation and regulation that brought on a long period of relative financial stability, with a reduced frequency of economic booms and busts. Ironically, this stability led to the decline of the very banking politics that brought it about.

Giving voice to a broad swath of American figures, including workers, farmers, politicians, and bankers alike, Money, Power, and the People recasts our understanding of what might be possible in balancing the needs of the people with those of their financial institutions.

Praise For Money, Power, and the People: The American Struggle to Make Banking Democratic…

“Highly recommended. In this engaging and well-researched study, historian Christopher Shaw examines what he calls “banking politics,” the political force emerging from the activism of ordinary people who joined together to challenge financial institutions.”
— Choice

“A remarkably timely—and genuinely timeless—account of one of the great struggles over the character of American capitalism. Money, Power, and the People will open your eyes about America’s financial and political past and open your mind about reforms that could create a more equitable future. You will enjoy and learn from this extraordinary book—that’s a promise you can take to the bank.”
— William C. Taylor, cofounder and founding editor of Fast Company

“In a dazzling—dare I say gripping!—historical narrative, Shaw reminds us of the surpassing importance of finance to the people it serves. Money, Power, and the People underscores how the greatest financial innovations came in the form of institutions that were demanded and designed through the will of the American people.”
— Sarah Bloom Raskin, former U.S. Deputy Secretary of the Treasury

“An engaging and enlightening history of working people’s fight against big finance. Essential reading for anyone who wants to understand the evolution of banking and politics from the Gilded Age to Occupy Wall Street.”
— Christina D. Romer, former chair of the Council of Economic Advisers

“Shaw’s book shows us that democratic battles to define the shape of the financial system—and ensure that it serves Main Street—are as American as apple pie. Principles of fairness, access and accountability were important one hundred years ago, just as they are today. Anyone interested in financial regulation today would benefit from reading this rich history.”
— Timothy Massad, former chairman of the Commodity Futures Trading Commission

“Deeply researched and energetically written, Money, Power, and the People could not be timelier. Anyone concerned about how today’s giant banks have rigged the regulatory system to become too big to fail, fueling the crisis of income inequality, will find this book a revelation.”
— Charles Postel, author of The Populist Vision

“Shaw demonstrates forcefully how, during the twentieth century, the U.S. private banking system was a major force behind instability, inequality, and economic injustice. Shaw also shows how workers and farmers struggled to create a banking system that truly served their interests. What emerges from this important book is that democratic banking in the U.S. has both deep roots and enormous potential for building a more just society.”
— Robert Pollin, University of Massachusetts, Amherst

“There’s an old refrain that still rings true for millions of people who get chewed up and spit out by the gatekeepers of America’s financial system: “To keep your beer real cold, put it next to a banker’s heart.” Shaw’s excellent history of what he calls “banking politics” shows how essential it is to battle this selfish, exploitative, undemocratic system and develop one that serves workers, farmers, small business, and ordinary consumers.”
— Jim Hightower, editor of The Hightower Lowdown

“Money, Power, and the People takes us on a fascinating journey through a time when opposition to the economic and political power of bankers and financial interests formed a cornerstone of progressive and populist politics. Accessible and comprehensive, it is a must read for those seeking to understand and confront the role of big finance in our current systemic crisis.”
— Gar Alperovitz, author of America Beyond Capitalism

“A forceful, lively, and eloquent historical polemic. In original and provocative terms, Shaw reveals the vital role popular social movements played in reforming the American banking system in response to the mounting economic instability and inequality of the early twentieth century, and how these hard-won reforms provided the essential financial framework for the sustained economic growth and widely-shared prosperity of the postwar era. This is a bracing political and historical argument, deserving of a wide audience.”
— Jeffrey Sklansky, author of Sovereign of the Market: The Money Question in Early America

Christopher W. Shaw received a doctorate in history from the University of California, Berkeley.
Loading...
or support indie stores by buying on