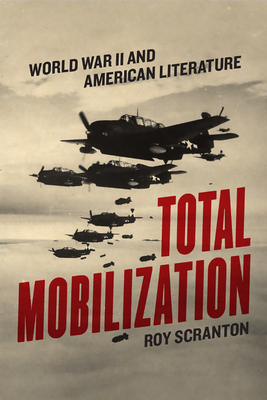 Since World War II, the story of the trauma hero—the noble white man psychologically wounded by his encounter with violence—has become omnipresent in America’s narratives of war, an imaginary solution to the contradictions of American political hegemony. In Total Mobilization, Roy Scranton cuts through the fog of trauma that obscures World War II, uncovering a lost history and reframing the way we talk about war today.

Considering often overlooked works by James Jones, Wallace Stevens, Martha Gellhorn, and others, alongside cartoons and films, Scranton investigates the role of the hero in industrial wartime, showing how such writers struggled to make sense of problems that continue to plague us today: the limits of American power, the dangers of political polarization, and the conflicts between nationalism and liberalism. By turning our attention to the ways we make war meaningful—and by excavating the politics implicit within the myth of the traumatized hero—Total Mobilization revises the way we understand not only World War II, but all of postwar American culture.

“Total Mobilization centers our attention on one iconic figure—the American soldier as trauma hero—and provides a profound and compelling study of the Second World War in American literary history. With remarkable concision, great argumentative tact, and discursive flair, Scranton uses this signal personage to make sense of some of the most shattering paradoxes of the American Century. Never reductive, wonderfully subtle in its formulations and perceptive in its close readings, this is a groundbreaking work of literary criticism and cultural history. It will be part of the permanent legacy of writing about literature and war in the twentieth century.”
— Vincent Sherry, Washington University in St. Louis

“Tough, plain-spoken, and thorough-going, Scranton harnesses his encyclopedic knowledge of poetry and fiction to argue for the ongoing importance of World War II, a legacy fusing capitalism and nationalism into a toxic crucible for American literature. Against the familiar focus on the traumatized hero-soldier, Scranton highlights total mobilization as the logic of war, a systemic violence that decimates the rest of the world even as it sacrifices unsuspecting US citizens. Deeply troubling and eye-opening.”
— Wai Chee Dimock, Yale University

"The trauma hero: the lone warrior who faces death, returns with unspeakable revelations, and in suffering absolves state and citizen of their complicity in collective violence and wartime atrocities. Scranton has news for us: we’ve been viewing American war through the myth of the trauma hero for so long that we’ve lost sight of the acts, the political logics, and the writings that don’t accord with it. In shaking us loose from that myth, Total Mobilization remakes the literature and legacy of the Second World War. A searching, bracing book."

"Scranton’s book asks an urgent question: How can citizens in 'an industrial commercial republic attempt to manage the conflict of liberal humanist values with the military violence that makes the practice of those values possible.' With precision and depth, Scranton answers by exploring the 'the role of the hero in totalized industrial war.' He exhumes the forgotten traces in poetry, narrative, film and cartoon, emphasizing the manner in which the category of trauma defines our nation’s ethics for what is socially acceptable. Fascinating, articulate, timely and richly archival, the book dissects the 'ethnonationalist pieties' embedded in the literature of the 'good' Second World War, engaging the fiercely contrasting layers between the real and the symbolic and the manufacture and deployment of the traumatic hero."

"How has something as central to U.S. culture as the figure of the trauma hero escaped critical scrutiny for so long? To say that Scranton’s Total Mobilization answers this question brilliantly even as it fills the void in criticism that inspires it is somehow not enough, because that void is America. A highly compelling and capaciously learned study of the literature of the Second World War, this book also illuminates as never before some of the chaotic depths of self-love, self-pity, and above all rank self-contradiction at the nation’s core. Delivered with unmistakable intellectual authority, and calling us to a confrontation with hard truth, it puts one in mind of classics of Americanist criticism like Richard Slotkin’s Regeneration Through Violence."

“There is great relevance in Scranton’s intention of seeing how meaning is made in America’s relationship to its wars and firearms, in its relationship to non-white, non-Christian populations, seeing that these relationships are roiled with prejudice and self-righteousness today, just as they have been for centuries. By analysing the representation of the soldier in American literature, and by paying attention to authors who work against the trauma hero, Scranton shows the 'collective practices' that have emerged as a result of wars, as well as the fractured nature of American society. These are critically important insights for coming to terms with the responsibility of such a powerful and dangerous machine as the American military.”