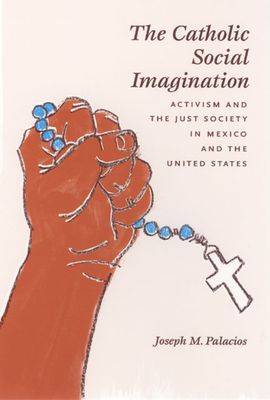 The reach of the Catholic Church is arguably greater than that of any other religion, extending across diverse political, ethnic, class, and cultural boundaries. But what is it about Catholicism that resonates so profoundly with followers who live under disparate conditions? What is it, for instance, that binds parishioners in America with those in Mexico? For Joseph M. Palacios, what unites Catholics is a sense of being Catholic—a social imagination that motivates them to promote justice and build a better world.

In The Catholic Social Imagination, Palacios gives readers a feeling for what it means to be Catholic and put one’s faith into action. Tracing the practices of a group of parishioners in Oakland, California, and another in Guadalajara, Mexico, Palacios reveals parallels—and contrasts—in the ways these ordinary Catholics receive and act on a church doctrine that emphasizes social justice. Whether they are building a supermarket for the low-income elderly or waging protests to promote school reform, these parishioners provide important insights into the construction of the Catholic social imagination. Throughout, Palacios also offers important new cultural and sociological interpretations of Catholic doctrine on issues such as poverty, civil and human rights, political participation, and the natural law.


Praise For The Catholic Social Imagination: Activism and the Just Society in Mexico and the United States (Morality and Society Series)…

“In this fine-grained ethnographic analysis, Joseph Palacios reveals how the teaching of the Catholic Church on poverty, human rights, immigration, and labor rights is brought to bear on different societies. He shows how differing civil society structures and divergent historical experiences of the Catholic Church in Mexico and the United States explain the contrasting patterns of church-based public engagement and societal influence in the two countries.”--Richard L. Wood, author of Faith in Action: Religion, Race, and Democratic Organizing in America
— Richard L. Wood

“Palacios’s book shows that American and Mexican Catholics are both thoroughly Catholic and thoroughly committed to Catholic social teaching, even if they think and act in different ways. Palacios describes the strong and weak points of each group, and what they have to learn from each other. Perhaps this well written and effectively argued book will help them do so.  For the rest of us it gives intriguing comparative evidence of the significant role religion plays in today's world.”--Robert N. Bellah, coauthor of Habits of the Heart: Individualism and Commitment in American Life
— Robert N. Bellah