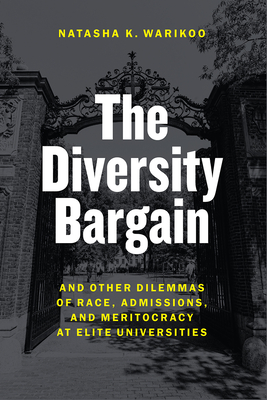 And Other Dilemmas of Race, Admissions, and Meritocracy at Elite Universities

We’ve heard plenty from politicians and experts on affirmative action and higher education, about how universities should intervene—if at all—to ensure a diverse but deserving student population. But what about those for whom these issues matter the most? In this book, Natasha K. Warikoo deeply explores how students themselves think about merit and race at a uniquely pivotal moment: after they have just won the most competitive game of their lives and gained admittance to one of the world’s top universities.

What Warikoo uncovers—talking with both white students and students of color at Harvard, Brown, and Oxford—is absolutely illuminating; and some of it is positively shocking. As she shows, many elite white students understand the value of diversity abstractly, but they ignore the real problems that racial inequality causes and that diversity programs are meant to solve. They stand in fear of being labeled a racist, but they are quick to call foul should a diversity program appear at all to hamper their own chances for advancement. The most troubling result of this ambivalence is what she calls the “diversity bargain,” in which white students reluctantly agree with affirmative action as long as it benefits them by providing a diverse learning environment—racial diversity, in this way, is a commodity, a selling point on a brochure. And as Warikoo shows, universities play a big part in creating these situations. The way they talk about race on campus and the kinds of diversity programs they offer have a huge impact on student attitudes, shaping them either toward ambivalence or, in better cases, toward more productive and considerate understandings of racial difference.

Ultimately, this book demonstrates just how slippery the notions of race, merit, and privilege can be. In doing so, it asks important questions not just about college admissions but what the elite students who have succeeded at it—who will be the world’s future leaders—will do with the social inequalities of the wider world.

Praise For The Diversity Bargain: And Other Dilemmas of Race, Admissions, and Meritocracy at Elite Universities…

“The Diversity Bargain illuminates just how much diversity has been commodified particularly among the elite, for whom good taste entails an eclectic palate.”

“Highlights a persistent question facing diversity efforts in higher education: how do universities make the case for diversity in the highly selective, competitive, and rigorous environments that define them as elite institutions? . . . Many institutions have embedded the diversity bargain in their own marketing for multicultural programming. The author provocatively laments that by adopting such rhetoric, universities—and the students that they influence—may limit their ability to make real social change.”

"Rather than evaluating the implementation or effects of affirmative action, Warikoo interrogates what it does: how does affirmative action in admissions factor into elites’ understandings of race and merit? The book is a timely and crucial intervention, given the recent course of affirmative action politics and the scholarly knowledge we have accumulated to date."
— Contemporary Sociology

"Warikoo (Harvard Graduate School of Education) acknowledges that elite institutions of higher education commit resources to diversifying their student bodies, yet fall short of their goals with respect to race and class. While admissions offices and enrolled white students value affirmative action and diversity, they do so because they feel much is to be gained and learned by diversifying the collegiate way of life. That the numbers of underrepresented minorities in the student body fall short of their relative percentages of the population does not occur to them as a problem, for two reasons. First is faith in the concept of merit. Second is the conviction that the admission process is fair. Thus, admitted students ascribe this distinction to individual merit and are thereby willing to accept some affirmative action so long as it personally benefits their own college experience. This is the diversity bargain. But demographic realities raise the question as to what merit is and how it can be redefined to ensure that all sectors of the population can access the opportunities that society offers. The author distinguishes between symbolic and real solutions and has several suggestions for next steps. A sophisticated contribution unobtrusively informed by current theory and distinguished by substantial field research at Brown, Harvard, and Oxford. Highly recommended."
— Choice

“The Diversity Bargain and Other Dilemmas of Race, Admissions, and Meritocracy at Elite Universities, offers a fascinating, erudite and scholarly study. . . . Through interviews with dozens of students at four elite universities in the US and UK, she explores the nuances of their perspectives on these issues [of diversity]. She also looks at different diversity-oriented programming offered at these campuses, and the varying impacts they have on the frames through which students understand their respective ‘diversity bargains’.”

"Elite university students have the prospect to be future leaders and to shape policy in our global society. As Natasha Warikoo notes in The Diversity Bargain, these students’ ideas about race and meritocracy provide us with glimpses into the future as well as reminders of ongoing debates around affirmative action. Drawing upon interviews with students from Brown, Harvard, and Oxford, the author details their interconnected 'race frames'—interpretive ideas about the role of race in elite universities and society more broadly—and the prevalence of color blindness, a common frame and ideology surrendering race and racism to irrelevancy in the present day."
— American Journal of Sociology

"[Warikoo] artfully incorporates research that exhibits the structural inequalities that exist for racial and ethnic minorities throughout her book....The Diversity Bargain offers a fresh and incisive perspective on one of the most heated and enduring social justice issues of the twenty-first-century."
— Teachers College Record

“[H]ow do undergraduates think about issues of race, merit, and opportunity? This is the central question in The Diversity Bargain….Through these interviews, Warikoo builds a typology for how students perceive race (termed ‘race frames’) and examines how these frameworks vary across the demographic groups of interviewed students. These frames are some of the most compelling aspects of this book, demonstrating the variety and complexity of students’ perceptions surrounding race at highly selective universities.”

“Warikoo challenges elite universities to rethink their part in that system, inviting them to consider what it would mean to scrap the notion of meritocracy and replace it with an admissions lottery. This thought experiment, Warikoo argues, would at least ‘make clear what distinctions admissions officers are making, why they are making them, and the implications of those decisions.’ Warikoo’s challenge is a useful one to elite universities and sociologists alike.”
— Sociology

"Students at elite universities may see themselves as 'winners,' but even they at times need to rationalize their elite status. That Warikoo shows us how a concept of diversity is recruited into a meritocratic justification is The Diversity Bargain’s main contribution to higher education studies."
— Journal of College Student Retention

"Warikoo’s investigation is rooted in a long sociological tradition of understanding the culture of privilege among “power elites.” While more attention has been given as of late to the racial attitudes and beliefs of members of nonelite groups, understanding how college students at institutions, such as Harvard, Brown, Oxford, and Cambridge, articulate an understanding about race is important precisely because it is these young people who are most likely to end up in positions of power. Warikoo makes a cogent point when she insists that elite colleges and universities have symbolic meaning, influencing the policies and practices of other institutions."
— Humanity & Society

"A timely and crucial intervention, given the recent course of affirmative action politics. . . . A carefully constructed, incisive book. It stays true to the empirical data to develop smart, accessible, important findings."
— Ellen Berrey

"If evidence were needed that tomorrow’s leaders do not enter college with the racial knowledge they need to guide the United States and United Kingdom through a turbulent time in our racial histories, The Diversity Bargain provides it. The book shows that white nationalism is not required to protect systems of white supremacy in ostensibly democratic societies. All it takes is leaders turning a blind eye to the pervasiveness of antidemocratic frames that quietly reinforce racial hierarchies."

Natasha K. Warikoo is associate professor of education at the Harvard Graduate School of Education. She is the author of Balancing Acts: Youth Culture in the Global City.