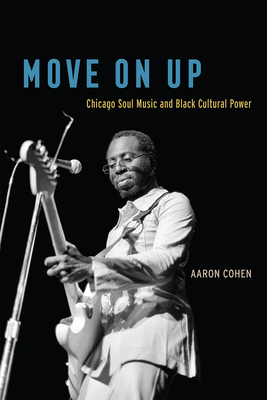 A No Depression Top Music Book of 2019

Curtis Mayfield. The Chi-Lites. Chaka Khan. Chicago’s place in the history of soul music is rock solid. But for Chicagoans, soul music in its heyday from the 1960s to the 1980s was more than just a series of hits: it was a marker and a source of black empowerment. In Move On Up, Aaron Cohen tells the remarkable story of the explosion of soul music in Chicago. Together, soul music and black-owned businesses thrived. Record producers and song-writers broadcast optimism for black America’s future through their sophisticated, jazz-inspired productions for the Dells and many others. Curtis Mayfield boldly sang of uplift with unmistakable grooves like “We’re a Winner” and “I Plan to Stay a Believer.” Musicians like Phil Cohran and the Pharaohs used their music to voice Afrocentric philosophies that challenged racism and segregation, while Maurice White of Earth, Wind, and Fire and Chaka Khan created music that inspired black consciousness. Soul music also accompanied the rise of African American advertisers and the campaign of Chicago’s first black mayor, Harold Washington, in 1983. This empowerment was set in stark relief by the social unrest roiling in Chicago and across the nation: as Chicago’s homegrown record labels produced rising stars singing songs of progress and freedom, Chicago’s black middle class faced limited economic opportunities and deep-seated segregation, all against a backdrop of nationwide deindustrialization.

Drawing on more than one hundred interviews and a music critic’s passion for the unmistakable Chicago soul sound, Cohen shows us how soul music became the voice of inspiration and change for a city in turmoil.


Praise For Move On Up: Chicago Soul Music and Black Cultural Power…

"A richly knowledgeable, deeply considered, and important addition to the history of African American music and its impact on Chicago and beyond."
— Booklist, Starred Review

"Spanning the late 1950s to the 1980s, Move On Up is a meticulously reported and illuminating social history that has more on its mind than simply replaying greatest hits. . . . Cohen conducted just over one hundred interviews spanning two decades. They capture still vibrant living witnesses to this pivotal era in Chicago music."
— Donald Liebenson

“Rarely has the history of the town’s soul music received the deep-dive treatment. . . . Cohen is a nimble storyteller with a smooth way of delivering the goods, which isn’t easy, considering the often convoluted trajectory of the genre. . . . The author uses his journalistic skills and training to track the soul trail. . . . What’s clearly evident throughout Move On Up is Cohen’s intimacy with soul’s history and Chicago’s complex cultural matrix. . . . One of Mayfield’s tunes is a fitting conclusion to the discussion here: ‘I’m A-Telling You,’ this is a good book.”
— Herb Boyd

“A tremendous achievement. . . . A book that finally gets at the deeper, richer story of Chicago soul—the spirit of empowerment and pride that have always made us so honored to be part of the Windy City legacy! Cohen picks up where other soul writers have left off on Chicago—really looking at the shifts into the '70s, which included greater ties to the means of production, and an increased role in the social agenda as well—all part of an evolution in songwriting styles, production techniques, and the growing power of the full length album over the 7" single! . . . A delight to read throughout—easily the deepest work that Cohen's ever given us."
— DustyGroove.com

"Many of the ten best arts books reviewed in Booklist over the past year reclaim or more fully appreciate artists whose legacies have been neglected or minimized due to their gender, sexual orientation, or race, while other titles offer new perspectives on icon figures and music itself. . . . Some of the biggest names in African American music populate Cohen’s vivid history of soul music in Chicago as he traces its evolution and profound and far-reaching social and artistic impact."
— Donna Seaman

"Chicago’s role as a hub for innovative black musicians from the 1960s to the ’80s has been underappreciated."
— Mark Guarino

"An absorbing approach. . . . Move On Up is a fascinating deep dive into a city’s evolving black presence. It avoids any stylistic squabbles or narrowing categorization, making it far easier to understand and appreciate such diverse acts as Ramsey Lewis, the Chi-Lites, Chaka Khan, and Terry Callier as part of the same rounded and often surprising movement."
— Lloyd Bradley

"With the focus on musicians as 'change agents,' Cohen vividly captures the spirit and energy of a city in tumult forging identities and fighting the power."
— Lois Wilson

"The Chicago-based author of Aretha Franklin: 'Amazing Grace' has set his sights on Windy City soul music and how it helped fuel black empowerment in his new book, Move On Up. Cohen . . . talks about the hitmakers, like The Impressions and Curtis Mayfield, Chaka Khan, The Chi-Lites, The Dells, but his book, published by the University of Chicago Press, is more than just a romp through the R&B charts. Rather, Cohen seeks to tell the story of how folks like Mayfield and Phil Cohran and the Pharaohs made music aimed at uplifting black consciousness and boosting African-American pride."
— Bobby Tanzilo

"You should buy this book. In a largely expert-free world, or where 'expert' is tantamount to a hollow term perpetually erroneously applied, Cohen is an actual, for real, expert on his subjects. How many times have I read his new book? I am closing in on twice."
— Colin Fleming

"Comprehensive and multi-layered. . . . Cohen has . . . produced a highly readable and entertaining, as well as jam-packed, informational saga, by operating at the street level, focusing on the reality of communities and their reflection in the identities of the artists who chose to represent them. . . . Certainly one of the finest ways to fully absorb and explore these divergent roots as they branched out all the way to contemporary soul and pop soul is the comprehensive discography that Cohen includes at the end of his book. . . . If you give these records a listen prior to picking up this book, you’ll be quite well prepared to hold on for the rocking roller coaster ride that awaits you. And, like Rhymefest said, you’ll be ready to get back to the future."
— Donald Brackett

"Maybe remarkably considering the attention foisted on its jazz and blues giants, there’s never been such an in-depth tome examining Chicago’s soul scene and its relationship to the major social changes of the ’60s and ’70s. . . . With thoroughness inherited from his historian father Sheldon, Cohen's eloquent flow [is] driven by fan’s passion as he starts by recounting the major role of Curtis Mayfield and the Impressions in establishing the Windy City’s soul scene against a charged backdrop of civil rights and Black Power. . . . Unconditionally recommended."
— Kris Needs

"Move On Up is an extraordinary achievement, packed with deep research and vivid writing, with a backbeat so strong it thumps from every page. Cohen has written the definitive account of an important slice of American popular culture. Cue up the Chi-Lites, open this book, and enjoy!"
— Jonathan Eig, author of "Ali: A Life"

“With a journalist’s clarity, a scholar’s curiosity, and a local’s passion, the incomparable Aaron Cohen affirms why Chicago has always been more than its challenges. Move On Up shows how big-shouldered grit, astonishing talent, and entrepreneurial savvy combined to make ‘the Chi’ a powerhouse center for music and activism back in the days when the world discovered that black was, indeed, beautiful.”
— Guthrie P. Ramsey, Jr., University of Pennsylvania, author of "Race Music: Black Cultures from Bebop to Hip-Hop" and "The Amazing Bud Powell: Black Genius, Jazz History, and the Challenge of Bebop"

“Chicago has long been a center of African-American political, cultural, spiritual, and economic power. Unsurprisingly, then, it has also been a center of musical power. From Muddy Waters to Jerry Butler to Curtis Mayfield to Earth Wind & Fire and beyond, the city has kept a fire burning at the heart of American music. In this history of soul music in Chicago, Cohen has brought together the voices of many of the most important postwar artists, activists, entrepreneurs, and visionaries who created the city’s rhythm & blues and soul industry. Together, they made some of the most powerful and enduring contributions to twentieth-century American music, and this vibrant chronicle of Chicago soul is sure to endure as not only a work of tremendous scholarship, but as a bedrock contribution to the history of twentieth-century American music.”
— Michael E. Veal, Yale University, author of "Dub: Soundscapes and Shattered Songs in Jamaican Reggae" and "Fela: The Life and Times of an African Musical Icon"

"If you buy only one book on soul music this year, this should be it. . . . Cohen’s passion for this music imbues this history with a lively spirit."
— Henry Carrigan

"Move On Up is an essential read not only for soul music fans, but for anyone interested in the social, cultural, and political history of Chicago during a key period in the twentieth century. This book will certainly be added to the reading list for many college music courses in the years to come. Highly recommended."
— Brenda Nelson-Strauss

"Cohen’s short but impactful and insightful book covers nearly seventy years of black music history...Move On Up’s most significant contribution to music history is its examination of how the performers received their music training...if there is a manuscript-sized rationale for the importance of music education in the public school system, Move On Up is it."
— Robert M. Marovich

"Remember the Year of Chicago Music? Yeah, that was supposed to be happening right now. While some of the energy of that celebration may still exist and some of it may still happen, the virus has taken most of the wind out of the Windy City’s plans. But it hasn’t stopped people’s interest in our musical culture. A recent publication, Cohen’s book Move On Up: Chicago Soul Music and Black Cultural Power, seems timed appropriately and provides a good read for anyone interested in the modern history of Chicago music. Cohen . . . has built a reputation for adroit research and insight. . . . Move On Up was a labor of love. . . . Anyone wanting to fill in knowledge gaps about this period would do well to read this volume."
— Jeff Cebulski

"Move on Up takes its place alongside Charles L. Hughes’s Country Soul: Making Music and Making Race in the American South, Suzanne E. Smith’s Dancing in the Street: Motown and the Cultural Politics of Detroit, and Emily J. Lordi’s forthcoming The Meaning of Soul: Black Music and Resilience since the 1960s as a provocative exploration of soul music and its richly embedded history in a community. Cohen’s book stands alone, however, for its brilliant depictions of a vibrant musical community and the development of various musical styles that illustrate musicians’ attempts to reflect and to respond to the often rapidly changing social and political currents swirling around them."
— Henry Carrigan

"Cohen's latest, Move On Up: Chicago Soul Music and Black Cultural Power, looks at how the likes of Curtis Mayfield, Terry Callier, and The Chi-Lites (among many others) came to create beautiful music and black-owned businesses. Rather than simply provide potted biographies of the stars, Cohen shows how things developed in the studio and through negotiations."
— Rock'n'Reel

Aaron Cohen covers the arts for numerous publications and teaches English, journalism, and humanities at the City Colleges of Chicago. He is the author of Aretha Franklin’s "Amazing Grace".
or support indie stores by buying on