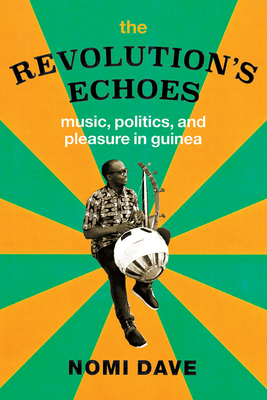 Music, Politics, and Pleasure in Guinea (Chicago Studies in Ethnomusicology)

Music has long been an avenue for protest, seen as a way to promote freedom and equality, instill hope, and fight for change. Popular music, in particular, is considered to be an effective form of subversion and resistance under oppressive circumstances. But, as Nomi Dave shows us in The Revolution’s Echoes, the opposite is also true: music can often support, rather than challenge, the powers that be.

Dave introduces readers to the music supporting the authoritarian regime of former Guinean president Sékou Touré, and the musicians who, even long after his death, have continued to praise dictators and avoid dissent. Dave shows that this isn’t just the result of state manipulation; even in the absence of coercion, musicians and their audiences take real pleasure in musical praise of leaders. Time and again, whether in traditional music or in newer genres such as rap, Guinean musicians have celebrated state power and authority. With The Revolution’s Echoes, Dave insists that we must grapple with the uncomfortable truth that some forms of music choose to support authoritarianism, generating new pleasures and new politics in the process.


Praise For The Revolution’s Echoes: Music, Politics, and Pleasure in Guinea (Chicago Studies in Ethnomusicology)…

“In The Revolution’s Echoes, Dave analyzes public pleasure as a structure of feeling at the heart of authoritarian aesthetics. Turning Adorno and others on their head, she shows that pleasure can be deeply political, not the erasure of politics. Guinean musicians’ artistic production, as well as their meaningful silences, challenge us to ask whether authoritarian systems are imposed from above by charismatic dictators, or rather are coauthored by the demands of ordinary people. The book illuminates Guinean politics and history and also has much to tell us about the intersection of politics and aesthetics in other parts of the world.”
— Mike McGovern, University of Michigan, author of "A Socialist Peace? Explaining the Absence of War in an African Country"

“The Revolution’s Echoes is a breakaway ethnography that goes beyond conventional wisdom about popular music and power in contemporary Africa. Dense with information, yet beautifully written, this book is sensitive and unsettling, shedding light on the way that popular forms of cultural intimacy and public pleasure articulate with complex systems of authoritarian rule. This monograph contains valuable insight about cultural politics in Sékou Touré’s Guinea, with a thoughtful broad brush that effortlessly navigates across genres and generations of popular music in Guinea. But it is about much more than music, with breathtaking description of how musicians participate in the politics of naming and how the voicing of praise has had repercussions well beyond the heady years of the revolution. Dave’s analysis points to a culture of forbearance and discretion, not silence, but quietness, and examines how local artists and audiences go beyond the literal characteristic of lyrics to express something deeper about their relationship to the state and to their compatriots. This book shows us why popular music matters and why long-term ethnographic fieldwork is probably the best way to account for it complexity. This book is a must read for anyone interested in the politics of culture in contemporary sub-Saharan Africa and in music as a window onto the human condition.”
— Bob W. White, Université de Montréal, author of "Rumba Rules: The Politics of Dance Music in Mobutu’s Zaire"

"In this rich and multilayered book, the author takes us on a journey through time, describing the complex relationship between music and the politics over the lifetime of an authoritarian state as it developed in Guinea. At independence in 1958, Guinea reminded itself of the centuries of history and tradition embedded within. Some of that was employed to forge a new identity for the new nation, with music taking center stage. Dave traces that process expertly but also delves underneath the surface to point at the way in which tradition, especially Mande tradition, informs the way musicians relate to the powerful. This has been done before but often in rather simplistic black-and-white terms. . . . Dave reveals the subtleties and complexities underneath. . . . A great contribution to a better understanding of how musicians survive and work in interaction with power."
— Bram Posthumus

Nomi Dave is assistant professor of music at the University of Virginia. She previously trained as a human rights lawyer and worked on issues of refugee and immigrant rights and women’s rights in the United States and Guinea.
Loading...
or
Not Currently Available for Direct Purchase