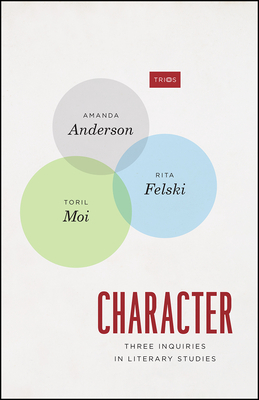 Over the last few decades, character-based criticism has been seen as either naive or obsolete. But now questions of character are attracting renewed interest. Making the case for a broad-based revision of our understanding of character, Character rethinks these questions from the ground up. Is it really necessary to remind literary critics that characters are made up of words? Must we forbid identification with characters? Does character-discussion force critics to embrace humanism and outmoded theories of the subject?

Across three chapters, leading scholars Amanda Anderson, Rita Felski, and Toril Moi reimagine and renew literary studies by engaging in a conversation about character. Moi returns to the fundamental theoretical assumptions that convinced literary scholars to stop doing character-criticism, and shows that they cannot hold. Felski turns to the question of identification and draws out its diverse strands, as well as its persistence in academic criticism. Anderson shows that character-criticism illuminates both the moral life of characters, and our understanding of literary form.  In offering new perspectives on the question of fictional character, this thought-provoking book makes an important intervention in literary studies.

“This trio of essays—punchy, polemical, and shrewd—refreshes literary studies by revealing the value of once tabooed character talk and persuading us to own up at long last to our multiple investments in character. Anderson, Felski, and Moi help us better understand the characters of fiction, both as objects of identification and as models of moral vision.”
— Deidre Shauna Lynch, Harvard University

“Character seeks to revive the full complexity and richness of our experience of fictional characters. Anderson, Felski, and Moi break with critical orthodoxies, offering a lucid and sophisticated account of the force of readerly engagement with character life. These insights into the aesthetic and ethical centrality of character will provoke debate for years to come.”
— Yi-Ping Ong, Johns Hopkins University

"Three internationally famous literary scholars have turned revolutionary generals with a book that everyone working as, or learning to be, a literary critic should read. . . . Moi, Felski and Anderson are more like gardeners, cultivating the beds, rooting up the bindweed of false dogma and making our little lot – literary criticism – more appealing. The different critical virtues so strikingly exemplified in each essay (Moi’s attentive argument, Felski’s wide-ranging analysis, Anderson’s insightful readings), the absolutely lucid prose (rightly, a stylistic rebuke to professional argot and inaccessible theory-speak) and the clear-eyed overview of critical debates mean this book is perfect for present and future gardeners. It could and should be read by all critics and students."
— Times Higher Education

"This TRIOS volume brings together Toril Moi, Rita Felski, and Amanda Anderson to discuss the concept of character in literary studies. Though quite different from one another, these critics each evince their own reality hunger. They’re tired of academic orthodoxies that emphasize that characters are not people but merely words on a page. A new paradigm is needed in which we take seriously the demands that characters make upon us."