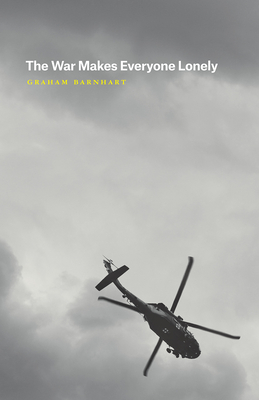 In his first collection of poems, many of which were written during his years as a US Army Special Forces medic, Graham Barnhart explores themes of memory, trauma, and isolation. Ranging from conventional lyrics and narrative verse to prose poems and expressionist forms, the poems here display a strange, quiet power as Barnhart engages in the pursuit and recognition of wonder, even while concerned with whether it is right to do so in the fraught space of the war zone. We follow the speaker as he treads the line between duty and the horrors of war, honor and compassion for the victims of violence, and the struggle to return to the daily life of family and society after years of trauma.
Evoking the landscapes and surroundings of war, as well as its effects on both US military service members and civilians in war-stricken countries, The War Makes Everyone Lonely is a challenging, nuanced look at the ways American violence is exported, enacted, and obscured by a writer poised to take his place in the long tradition of warrior-poets.

Graham Barnhart is a PhD candidate in Creative Writing at The University of North Texas and a former Wallace Stegner Fellow.


Praise For The War Makes Everyone Lonely (Phoenix Poets)…

"Barnhart, a veteran who served as an Army Special Forces medic, creates a tense world that burns into memory."
— The Millions

"The War Makes Everyone Lonely, Barnhart’s first book of poetry, is a haunting collection that confronts questions of memory and isolation, that stem from the duration and aftermath of Barnhart’s own military service. The collection of poetry can be delineated as part lyrical rumination, part narrative rendering that figures war as a physical space on a poetical map. . . . Barnhart’s poems perform a similar exacting work, with relays of stunning imagery and objective narrative interspersed with moments of music and subjective intimacy. The book is wise in its section-less structure that switches between scenes of military and veteran/civilian life (often in the same poem), in a manner that blurs the boundary between the two and showcases war, for the individual that survives it, as a non-linear, ongoing experience. . . .  this book of poetry is a refreshing breath of truth that avoids romanticism and offers, at times, a subtle yet searing critique."
— Michigan Quarterly Review

"In his ruminative debut, The War Makes Everyone Lonely, Graham Barnhart documents in fugitive snapshots the service in Afghanistan and Iraq of a US Army medic, who returned to the States searching for words to describe realities that may have no words, yet require them. Keenly observant about the tension between complicity and bravery, war and the homefront, Barnhart finds himself 'dressed like the men who killed / their husbands, [passing out] sewing machines / to widows so they could make clothes / for their children and embroider cemetery flags.' Here is a poetry that performs 'Notice and Focus'—neither shrieking nor staying silent about the terrible rubble of the Terror Wars. And yet, it still dreams of waking up to nudges from horses, black garbage scrap in barbed wire, and a love that's 'so clear and thin / it couldn’t be seen.'"
— Philip Metres, author of "The Sound of Listening: Poetry as Refuge and Resistance"

“Graham Barnhart’s remarkable debut collection is at once a soldier’s searing field report and a brilliant lyric response to 21st century war. With gravity, precision and grace, he writes ‘As an aggressor / aware of his complicity.’ As a medic working under fire and in the debris fields of the aftermath, he brings to his art uncommon gifts of attention and inclusion: not only combatants, but civilians, not only the ‘catalog of fire’ but ‘stillness / raveled rather than torn.’ In this age of drones and eternal occupation, Barnhart inscribes extremity anew, joining the company of those writing from the trenches of the Great War and beyond, an equal among them.”
— Carolyn Forché, author of "What You Have Heard Is True: A Memoir of Witness and Resistance"
or
Buy Here
Copyright © 2020 American Booksellers Association