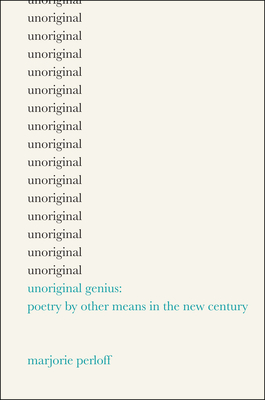 Poetry by Other Means in the New Century

What is the place of individual genius in a global world of hyper-information— a world in which, as Walter Benjamin predicted more than seventy years ago, everyone is potentially an author? For poets in such a climate, "originality" begins to take a back seat to what can be done with other people’s words—framing, citing, recycling, and otherwise mediating available words and sentences, and sometimes entire texts. Marjorie Perloff here explores this intriguing development in contemporary poetry: the embrace of "unoriginal" writing. Paradoxically, she argues, such citational and often constraint-based poetry is more accessible and, in a sense, "personal" than was the hermetic poetry of the 1980s and 90s.

Perloff traces this poetics of "unoriginal genius" from its paradigmatic work, Benjamin’s encyclopedic Arcades Project, a book largely made up of citations. She discusses the processes of choice, framing, and reconfiguration in the work of Brazilian Concretism and Oulipo, both movements now understood as precursors of such hybrid citational texts as Charles Bernstein’s opera libretto Shadowtime and Susan Howe’s documentary lyric sequence The Midnight. Perloff also finds that the new syncretism extends to language: for example, to the French-Norwegian Caroline Bergvall writing in English and the Japanese Yoko Tawada, in German. Unoriginal Genius concludes with a discussion of Kenneth Goldsmith’s conceptualist book Traffic—a seemingly "pure’" radio transcript of one holiday weekend’s worth of traffic reports. In these instances and many others, Perloff shows us "poetry by other means" of great ingenuity, wit, and complexity.

Praise For Unoriginal Genius: Poetry by Other Means in the New Century…

"Unoriginal Genius showcases, yet again, why Marjorie Perloff is the most respected expositor for the avant-garde in poetry. She demonstrates why lauded, modern poets (many of whom have questioned the values of both 'the original' and 'the creative') might prefer instead to 'cheat' on their assignments by handing in poems that steal words and remix lines, verbatim, from the databases of the déja dit. I recommend that every genius read this omnibus—then copy its poetics."—Christian Bök, author of Eunoia

“Unoriginal Genius is primarily concerned with ‘what can be done with other people’s words’ and shows  how increasingly writers have used forms of citation and transcription to produce poetry ‘by other means’ in a culture dominated by modes of rapid communication and data transmission. Perloff’s writing is as dazzling and exciting as ever, challenging us to read these experimental texts with a perspicacity and pleasure that might approximate her own.”

“One of our most original critics, Marjorie Perloff, turns her attention to something profoundly unoriginal: the contemporary poetics of citation, collation, and compilation. Will we look at originality the same way again? As she has done so often, Perloff makes central what might have seemed marginal, and argues a compelling case for poets, practices, and works that test the limits of unoriginality. Unoriginal Genius is a delight.”
— Roland Greene, Stanford University

“In this book Marjorie Perloff launches the study of poetry into the era of streaming video, blogging, text messaging, Internet search engines, and social network sites. She recounts the many creative techniques—from elegant theft to multilingual multichannel noise—that authors have employed while exploring twenty-first-century technologies for storing, generating, and distributing the written and spoken word. She also provides a backstory for this exciting new phase in world literature that includes Walter Benjamin’s Arcades Project and Brazilian concrete poetry. Unoriginal Genius is news that will stay news.”

“A brilliant and timely commentary on contemporary poetics.  Joining a close reading of individual texts to wide-ranging interpretations of a variety of twentieth- and twenty-first century poets and movements, Marjorie Perloff’s Unoriginal Genius charts the poetics of an age of digital, mobile, and endlessly quotable texts.  This book will intrigue all who want to know how contemporary poetry has morphed from previous ideals of ‘originality’ to the dialogical ‘re-make’ without losing its mysterious appeal—or its ‘genius.’”

“Marjorie Perloff’s Unoriginal Genius takes the reader on a dazzling tour through Walter Benjamin’s Paris arcades, Kenny Goldsmith’s New York traffic broadcasts, Haroldo de Campos’ Concrete poetry, and Yoko Tawada’s Japanese-inflected German prose. This most original journey is full of surprises and highlights the centrality of quotation, transcription, and copying as some of the most innovative strategies in twentieth-century culture.”

“For over a decade Marjorie Perloff has been carefully approaching the concrete poetry movement from different angles and in Unoriginal Genius she finally tackles its central role in the post-war literary scene. A keen strategist, Perloff's reading of concretism as playing a part in the arriere-garde is an instant classic.”

"Living up to its Clausewitzian subtitle, Unoriginal Genius makes sense of the sparring with the reader that has occupied poets since Baudelaire. It recounts the expansion of poetry's empire, carried by shifts in media and failures of belief in language. Here poetry is shown fully turning the corner from discourse to function."

“Perloff is savvy to the workings and influence of electronic or media-driven innovations. . . . She is equally astute in her analyses of modernist texts such as T. S. Eliot’s The Wasteland and poems by Stephen Crane, Ezra Pound, and W. B. Yeats. . . . Highly recommended.”

“Perloff is an erudite and enthusiastic guide through some beautiful (and often beguiling) work.”
— National Post
or
Not Currently Available for Direct Purchase
Copyright © 2020 American Booksellers Association