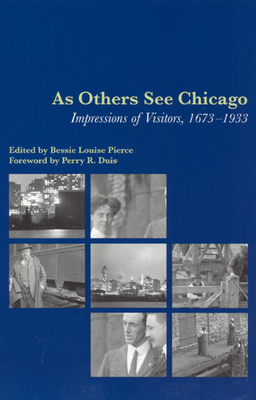 As Others See Chicago

Sometimes it takes an outsider to capture the essence of an individual place. The impressions of travelers in particular have a special allure—unanticipated and serendipitous, their views get to the heart of a particular region because nothing to them is routine or expected.

First published in 1933 by the University of Chicago Press to mark the occasion of the Century of Progress Exhibition, As Others See Chicago consists of writings culled from over a thousand men and women who visited the city and commented on the best and worst it had to offer, from the skyscrapers to the stockyards. Originally compiled by Bessie Louise Pierce, the first major historian of Chicago, and featuring her own incisive commentary, the volume brings together the impressions of visitors to Chicago over two and a half centuries, from the early years of Westward Expansion to the height of the Great Depression. In addition to writings from better known personalities such as Rudyard Kipling and Waldo Frank, the book collects the opinions of missionaries, aristocrats, journalists, and politicians—observers who were perfectly placed to comment on the development of the city, its inhabitants, and well known events that would one day define Chicago history, such as the Great Fire of 1871 and the 1893 World's Fair.

Taking us back to a time when Chicago was "more astonishing than the wildest visions of the most vagrant imaginations," As Others See Chicago offers an enthralling portrait of an enduring American metropolis.