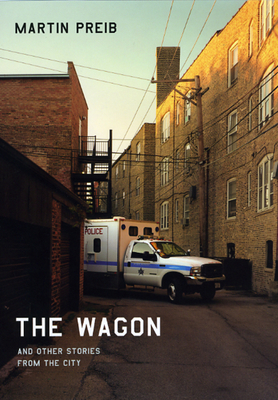 Martin Preib is an officer in the Chicago Police Department—a beat cop whose first assignment as a rookie policeman was working on the wagon that picks up the dead. Inspired by Preib’s daily life on the job, The Wagon and Other Stories from the City chronicles the outer and inner lives of both a Chicago cop and the city itself.

The book follows Preib as he transports body bags, forges an unlikely connection with his female partner, trains a younger officer, and finds himself among people long forgotten—or rendered invisible—by the rest of society. Preib recounts how he navigates the tenuous labyrinths of race and class in the urban metropolis, such as a domestic disturbance call involving a gang member and his abused girlfriend or a run-in with a group of drunk yuppies. As he encounters the real and imagined geographies of Chicago, the city reveals itself to be not just a backdrop, but a central force in his narrative of life and death. Preib’s accounts, all told in his breathtaking prose, come alive in ways that readers will long remember.

“From its aptly noirish title on, Martin Preib’s The Wagon has rightness of authenticity about it. From the perspective of a cop he fashions a compelling view of the Chicago Algren once called ‘the dark city.’ There’s a unique quality to his essays which manage to be broodingly meditative even as their narrative drive keeps you turning pages.”

— Stuart Dybek, author of I Sailed with Magellan

“Martin Preib worked as a bartender, a hotel doorman, a lowest-level cop (carrying out the dead). He filled his dresser drawers and his pockets and the patrol cars he drove with his scribblings, looking for his own form, his own voice. He believed he failed and he punished himself, but he kept on and the writing grew weightier, like the dead when they grow holy and sink into the earth. His language and thought escalated, he found a voice, and those fragments of street talk and cop-think took shape as comic or ugly but true stories of what Chicago does to its people. Now this indestructible writer has fused his stories into a remarkable first book—an essay that is a memoir, and also something else that is very like a prayer.”

“Chicago cop Martin Preib is Exhibit A for the dictum that nobody can write about a cop’s life the way a cop can. And very few can write any kind of nonfiction with the startling directness and poetry that Preib brings to this memoir-in-progress. Preib has been with the Chicago Police Department, working in the 24th District, the most diverse community in the city, for five years. He works the wagon, a job that the police union will soon make extinct. A wagon man retrieves and transports the dead to the morgue; it’s considered both the lowliest and the most challenging job on the police force. Preib lifts this task to the level of moral philosophy: he shows us around various death scenes, pointing out how the accumulation of collection letters or platoons of pill bottles are part of the “narrative of death.” He talks about how an experienced wagon man can feel or see the dead weight in people still alive but sliding, and he wonders what started the slide. He infuses poetry, in an entirely natural way, into his work with the dead. The dead are personified; he speaks of them as if they have will and intent (especially intent to end up in bathtubs, on floors, or in basements, all low places). He sees the dead as a Greek chorus, speaking to the living and forcing us to size up the themes in our own lives (as he does himself throughout the book). Preib may wheel his wagon to some very low places, but in doing so, he opens up the world.”

“[The Wagon is] about the real Chicago, the city of tribes, the city many of you know, not that fictional metropolis sometimes offered in magazines and TV shows. . . . So there are no blondes in red dresses. No detectives with cleft chins. It hooked me right there. And if there's a hero, the hero is an intelligent man trying to figure things out.”

"The book is anchored by ‘The Wagon,’ the piece honored by the Virginia Quarterly Review as one of the best essays published on its pages in 2005. In it, Preib details his work on the vehicle the CPD uses to pick up dead bodies. It seems incongruous to describe such a gut-wrenching story as gorgeous, but gorgeous it is; Preib's musings on the recently, often ignominiously departed are particularly affecting, with flashes of morbid humor for relief. Other trenchant essays touch on the trials of police work, his years as a doorman and a union organizer, his hitchhiking escapades as a young man, and his observations of Chicago. One thing's for sure: Preib isn't a cop moonlighting as a writer. He's a writer who happens to work as a cop."—Jerome Ludwig, Chicago Reader

"The darkness pervading the title essay of Martin Preib’s new collection of stories, The Wagon and Other Tales From the City, is rooted in an exploration of death and loneliness seen through the eyes of a writer who is also a Chicago police officer assigned to haul dead bodies to the morgue. The essay . . . lends a lyrical voice to the grimmest angles of Chicago, the harsher world that police officers see every day."

“Police thrillers are so widely read and police dramas so commonplace on television that many people think they have a good understanding of what a cop’s world is like. But in truth that world is seldom revealed with anything approaching verisimilitude. We get it with The Wagon.”

"Martin Preib, now a 46-year-old, eight-year veteran of the Chicago Police Department, does not invoke force of law for compliance, rather a powerful force of language developed over a lifetime of studying classical literature and Greek — but few writing classes."
— Jeff Johnson

"Preib’s is a voice that has almost never been heard in American writing: not merely the voice of an ordinary policeman, which is rare enough, but the voice of someone whose working life has been spent in the service industry. . . . For [Preib], ‘there is a kind of faith that lingers in realism, a belief that knowing the city will lead somewhere beyond the city.’ He has justified and realized that faith in The Wagon, a quite remarkable book that is much larger than its slender dimensions."

"Preib’s been around. He knows writing—and he knows the city’s darkest corners. . . . Preib is a promising writer, someone who we’ll undoubtedly hear from again, someone we need to hear from again. I for one will read whatever he writes next."
— Alex Kotlowitz

“The depiction of what it is really like to be a cop - in all its sadly hilarious glory - is what makes this book work so well.”

Martin Preib is an officer with the Chicago Police Department. His essays have appeared in the Virginia Quarterly Review and Tin House.