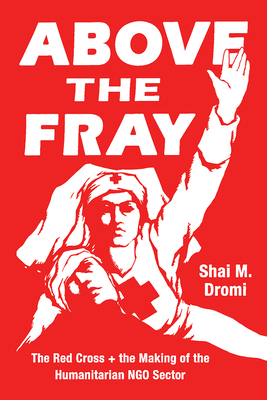 The Red Cross and the Making of the Humanitarian NGO Sector

From Lake Chad to Iraq, nongovernmental organizations (NGOs) provide relief around the globe, and their scope is growing every year. Policy makers and activists often assume that humanitarian aid is best provided by these organizations, which are generally seen as impartial and neutral. In Above the Fray, Shai M. Dromi investigates why the international community overwhelmingly trusts humanitarian NGOs by looking at the historical development of their culture. With a particular focus on the Red Cross, Dromi reveals that NGOs arose because of the efforts of orthodox Calvinists, demonstrating for the first time the origins of the unusual moral culture that has supported NGOs for the past 150 years.

Drawing on archival research, Dromi traces the genesis of the Red Cross to a Calvinist movement working in mid-nineteenth-century Geneva. He shows how global humanitarian policies emerged from the Red Cross founding members’ faith that an international volunteer program not beholden to the state was the only ethical way to provide relief to victims of armed conflict. By illustrating how Calvinism shaped the humanitarian field, Dromi argues for the key role belief systems play in establishing social fields and institutions. Ultimately, Dromi shows the immeasurable social good that NGOs have achieved, but also points to their limitations and suggests that alternative models of humanitarian relief need to be considered.


Praise For Above the Fray: The Red Cross and the Making of the Humanitarian NGO Sector…

“Above the Fray is a major effort to analyze the development of a distinct humanitarian field animated by the religious worldview of the nineteenth Calvinist milieu of Geneva, which connects a network of philanthropists, pacific activists, and religious actors concerned with addressing human tragedies. In telling the story of the emergence of this institutional field, Dromi innovates by bringing meaning-making into Bourdieusian field analysis in a non-reductivist fashion. Thus, he makes a brilliant contribution to historical sociology, and offers a much-needed addition to the sociological theory of fields. His book will be a crucial point of reference for several fields of research in the years to come.”
— Michèle Lamont, professor of sociology and African and African American studies, Harvard University

“Humanitarianism is not just an ethical orientation, but a whole sector of social institutions and practical actions. Dromi’s Above the Fray superbly illuminates both the history of this field since the founding of the Red Cross and its increasingly difficult challenges today.”
— Craig Calhoun, university professor of social sciences, Arizona State University

Shai Dromi is a college fellow in the Department of Sociology at Harvard University.
Loading...
or
Not Currently Available for Direct Purchase