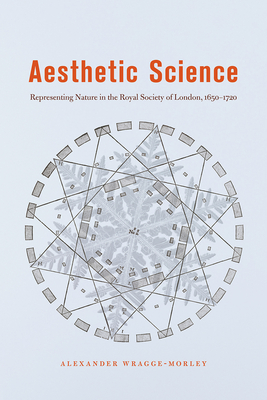 Representing Nature in the Royal Society of London, 1650-1720

The scientists affiliated with the early Royal Society of London have long been regarded as forerunners of modern empiricism, rejecting the symbolic and moral goals of Renaissance natural history in favor of plainly representing the world as it really was. In Aesthetic Science, Alexander Wragge-Morley challenges this interpretation by arguing that key figures such as John Ray, Robert Boyle, Nehemiah Grew, Robert Hooke, and Thomas Willis saw the study of nature as an aesthetic project.

To show how early modern naturalists conceived of the interplay between sensory experience and the production of knowledge, Aesthetic Science explores natural-historical and anatomical works of the Royal Society through the lens of the aesthetic. By underscoring the importance of subjective experience to the communication of knowledge about nature, Wragge-Morley offers a groundbreaking reconsideration of scientific representation in the early modern period and brings to light the hitherto overlooked role of aesthetic experience in the history of the empirical sciences.


Praise For Aesthetic Science: Representing Nature in the Royal Society of London, 1650-1720…

"Wragge-Morley successfully melds a readable narrative of the Scientific Revolution in England with an original historical interpretation of the foundations and methods of empirical science underlying the work of its key figures. . . . Despite explicating the subtle interactions of 17th-century empirical discoveries and emerging empirical methods, philosophy, and theology, the work is remarkably free of unnecessary jargon or pedantic argument. It should be in every library with strengths in intellectual history, European history, or the history and philosophy of science. . . . Essential."
— CHOICE, 2020 Outstanding Academic Title

"[A] critical intervention. Although historians of science have long recognized the importance of rhetoric to the early Royal Society, they have tended to view its theological, aesthetic and affective element at odds with the development of empiricism. Aesthetic Science demonstrates instead the centrality of aesthetic experience to the construction of natural historical texts and images. . . . In each chapter, the book’s unfurling argument is led by a number of questions and problems, followed by explanations of how the physico-theologians approached them, and observations on the implications of these strategies. The pleasing logic of this structure (and the careful taking stock at each stage of the argument) creates a sense of thoroughness, lending extra credibility to the book’s insightful claims. The book feels little need to assert its argument, instead proceeding from fastidious and original analysis of often familiar source material to offer conclusions that, when they arrive, seem almost self-evident. Aesthetic Science asks us to re-entangle notions of belief, beauty and knowledge in ways that should have a profound impact on how we approach the study of early modern science."
— Archives of Natural History

"With this engaging book, Alexander Wragge-Morley joins a body of new scholarship that draws attention to the nuanced history of the early Royal Society, addressing practices and discursive activities that have fallen outside of the scope of a more traditional history of institutions. Arguing against the classical reading of the early Royal Society as exemplifying a new dispassionate and objective study of nature in the late seventeenth and early eighteenth centuries, Wragge-Morley instead demonstrates the importance of subjective and affective states in shaping the epistemological framework of the Society's activities. . . . [The] ambitious book covers a wide range of topics that have been broadly overlooked in the history of the early Royal Society, from the formative influence of physico-theology to the role of rhetoric and experiences of pleasure in the creation and transmission of knowledge. . . . Wragge-Morley successfully offers the reader a history that captures the clear interplay between theology, rhetoric, natural history and even briefly archaeology and architecture. As a contribution to the history of science, this work powerfully demonstrates the continuity of knowledge practices across disciplines whose boundaries have often remained too fixed, adding further nuance and interest to this active field of contemporary scholarship."
— Nuncius

"Thought-provoking, useful, and ambitious... An engaging piece of scholarship, thanks to Wragge-Morley's fluid prose, many concrete examples, and careful selection of evidence... Aesthetic Science is going to become a staple for history of science postgraduates and specialists alike."
— Journal of British Studies

"An ambitious and provocative argument for the interrelation of empirical science and aesthetic taste. . . . Aesthetic Science advances a necessary intervention, compelling us to grapple with the inextricably theological, affective, and yet universalizing grounds of natural philosophy. Wragge-Morley's argument for the conjoined origins of empirical science and aesthetic taste advances a revelatory corrective to anybody who continues to take Kant at his word."
— Eighteenth-Century Studies

"Wragge-Morley boldly challenges a long-standing orthodoxy about the Royal Society's attachment to plain language in scientific description. The work is original, moves across the disciplines, and is an important contribution to the poetics of early modern science and to the debate about objectivity."
— John Brewer, Eli and Edythe Broad Emeritus Professor in Humanities and Social Sciences, California Institute of Technology

"Riveting and consequential. This is a book that transforms our understanding of Royal Society science while providing an alternative genealogy of modern aesthetics. Wragge-Morley reveals how physico-theology, long treated as a merely apologetic discourse, shaped contexts of discovery. As he brilliantly demonstrates, physico-theological assumptions effectively required natural phenomena like snowflakes to be analyzed as ruins, vestiges of an originally perfect design. Making new sense of the diversity of Royal Society projects, Wragge-Morley recovers a still-vital tradition of aesthetic thinking governed by physico-theological rather than Kantian assumptions. His aesthetic approach to his materials makes the most compelling argument of all: a demonstration that the imbrication of metaphysics, theology, and early modern scientific practice can only be revealed through a history of experience."
— Joanna Picciotto, University of California, Berkeley

"This is an important and exciting book. Aesthetic Science shows how members of the early Royal Society engaged with the problem of representation while supporting an ideology of empirical science. Historians have spilled much ink on documenting the emergence of empiricism in the early modern period, yet they have failed to note that empiricist natural philosophers were acutely aware of the limits of representation. Wragge-Morley surveys an impressive cast of characters, and what emerges is a new interpretation of what the early Royal Society was up to. The story told is rich, complex, and thoroughly convincing."
— Dániel Margócsy, author of Commercial Visions: Science, Trade, and Visual Culture in the Dutch Golden Age

Alexander Wragge-Morley is a lecturer in the history of science and medicine at Lancaster University.
Loading...
or
Not Currently Available for Direct Purchase