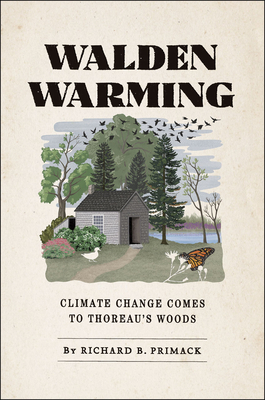 In his meticulous notes on the natural history of Concord, Massachusetts, Henry David Thoreau records the first open flowers of highbush blueberry on May 11, 1853. If he were to look for the first blueberry flowers in Concord today, mid-May would be too late. In the 160 years since Thoreau’s writings, warming temperatures have pushed blueberry flowering three weeks earlier, and in 2012, following a winter and spring of record-breaking warmth, blueberries began flowering on April 1—six weeks earlier than in Thoreau’s time. The climate around Thoreau’s beloved Walden Pond is changing, with visible ecological consequences.

In Walden Warming, Richard B. Primack uses Thoreau and Walden, icons of the conservation movement, to track the effects of a warming climate on Concord’s plants and animals. Under the attentive eyes of Primack, the notes that Thoreau made years ago are transformed from charming observations into scientific data sets. Primack finds that many wildflower species that Thoreau observed—including familiar groups such as irises, asters, and lilies—have declined in abundance or have disappeared from Concord. Primack also describes how warming temperatures have altered other aspects of Thoreau’s Concord, from the dates when ice departs from Walden Pond in late winter, to the arrival of birds in the spring, to the populations of fish, salamanders, and butterflies that live in the woodlands, river meadows, and ponds.

Primack demonstrates that climate change is already here, and it is affecting not just Walden Pond but many other places in Concord and the surrounding region. Although we need to continue pressuring our political leaders to take action, Primack urges us each to heed the advice Thoreau offers in Walden: to “live simply and wisely.” In the process, we can each minimize our own contributions to our warming climate.

“Determined to help the public understand global warming, Primack decided to search for evidence of climate change in Concord, Massachusetts, home of Walden Pond, made famous by pioneering environmentalist Henry David Thoreau. Primack’s plan was to compare field notes of the past with new information about the same plants in the same places, but he despaired of finding reliable old records until he learned about Thoreau’s unpublished, little-known tables precisely documenting the annual flowering dates for more than 300 plant species. Primack also struck gold in the form of invaluable nature journals kept by modern-day citizen scientists. He now tells the deeply instructive story of the challenges he and his dedicated graduate students faced during the past decade as they identified the many plants that have disappeared since Thoreau’s time and those which “are flowering earlier in successive years” as spring temperatures rise. Primack shares striking tales from the field and elucidates from an unnervingly close-to-home perspective the dynamics and impact of climate change on plants, birds, and myriad other species, including us.”
— Donna Seaman

"This book is more than a clarion testament to the real and present effects of climate change. It is an exhortation to become more engaged in the natural world whether through citizen science or observation, and, in so doing, recognize and limit our own impacts on the earth. A constant presence throughout this book, Thoreau would be pleased to read this volume, which weaves together science, nature, ethics, and human action as part of a single whole."
— Science

“Primack’s book brings the issue of climate change down to earth in a focused approach without hard science; recommended to students of environmental studies as well as to general readers active in the study of the subject.”
— Susan E. Brazer

“Each chapter of this book documents alarming change: the flowering of the pink lady’s slipper orchid has begun three weeks earlier; wild apple blossoms have advanced by two to four weeks; wood sorrel by six weeks. . . . [Walden Warming] show[s] compellingly how a place and its ecosystems can alter dramatically in the face of climate change.”
— Jules Pretty, University of Essex

“The book tells the story of Primack’s struggle to replicate Thoreau and find changes in flowering times, but soon broadens into a hymn to citizen science. Primack finds many others who are not conventional scientists but keep careful records of myriad things, from the times that migratory birds arrive to the date butterflies emerge and ice melts on ponds. It is these extraordinary people who make the book a rich, rewarding read. And there is also the inspiring message that anyone with a keen eye for nature can make a difference, with an afterword on how to become a citizen scientist.”
— Alun Anderson

"Primack’s story is worth telling, and Primack is a worthy storyteller. . . . Primack clearly demonstrates the value of several non-traditional forms of historical observations for documenting change, including personal journals, butterfly club observations, and fishing lodge records. Perhaps most importantly, Primack clearly demonstrates that our environment is changing rapidly, and this is undoubtedly due to anthropogenic climate change."
— Theresa M. Crimmins, University of Arizona

“Primack’s elegant and eloquent scientific memoir shows how today’s science is advancing thanks to Henry Thoreau’s mid-nineteenth-century observations as recorded in his journal and in his almost completely unknown because unpublished charts containing years and years worth of data on first flowering, bird arrival times, and much else happening in Concord’s natural world. Primack’s book is important in three ways: it is a report on what global warming has already done to a much-loved bit of American space—Walden Pond; it is a detailed warning about what we are now facing; and it is a stirring call to arms, especially to young Americans and students about how they can help. Emerson told Thoreau to keep a journal. Primack is urging people, especially young people, to keep Thoreauvian journals, not for personal reasons, but to advance our knowledge of what happens and when in the natural world we all share. This book is a grand gift, a bracing and appealing take on a difficult and complex problem. I wish I had read it when I was nineteen.”
— Robert J. Richardson Jr., author of Henry Thoreau: A Life of the Mind

“This is an important book that should be required reading for everyone who cares about the future of our planet, and especially for those who remain skeptical about the threats of climate change. What better place to chronicle the effects of global warming than in the cradle of the American environmental movement—Thoreau’s Walden Woods.”
— Don Henley

“Thoreau, in Walden, proposed a ‘realometer’ to filter out prejudice and delusion. This eloquent new book fills that role for us, reminding us that global warming is not an abstract future proposition but a very profound current reality.”
— Bill McKibben, author of Oil and Honey: The Making of an Unlikely Activist