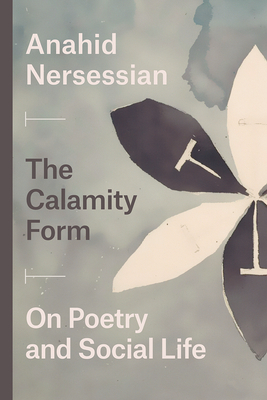 On Poetry and Social Life

Romanticism coincided with two major historical developments: the Industrial Revolution, and with it, a turning point in our relationship to the earth, its inhabitants, and its climate. Drawing on Marxism and philosophy of science, The Calamity Form shines new light on Romantic poetry, identifying a number of rhetorical tropes used by writers to underscore their very failure to make sense of our move to industrialization.

Anahid Nersessian explores works by Friedrich Hölderlin, William Wordsworth, John Keats, and others to argue that as the human and ecological costs of industry became clear, Romantic poetry adopted formal strategies—among them parataxis, the setting of elements side by side in a manner suggestive of postindustrial dissonance, and apostrophe, here an address to an absent or vanishing natural environment—as it tried and failed to narrate the calamities of capitalism. These tropes reflect how Romantic authors took their bewilderment and turned it into a poetics: a theory of writing, reading, and understanding poetry as an eminently critical act. Throughout, Nersessian pushes back against recent attempts to see literature as a source of information on par with historical or scientific data, arguing instead for an irreducibility of poetic knowledge. Revealing the ways in which these Romantic works are of their time but not about it, The Calamity Form ultimately exposes the nature of poetry’s relationship to capital—and capital’s ability to hide how it works.


Praise For The Calamity Form: On Poetry and Social Life…

"Reading this always arresting, often startling study feels a little like reading a poem by Donne; unlike things and scales of attention get pressed together to yield a new kind of understanding, at once intellectual and emotional. . . . [The Calamity Form] is a page-turner, the likes of which I can’t remember encountering. Reading Nersessian is like talking to a person of enormous intelligence, originality, creativity, energy, wit, confidence, and style who also works to make herself unknowing enough—vulnerable, susceptible enough—to channel the unheard melodies of the best known of Romantic era poems."
— Marjorie Levinson

"The Calamity Form injects a Marxist soul into Deconstruction’s veins. . . [The Calamity Form] is thoroughly a book of the present and is poised to become a touchstone of contemporary Romantic studies."
— Bakary Diaby

"The Calamity Form gives a compelling demonstration of how we might have our formalist cake and eat history too. . . . Formalism doesn’t mean a total sidelining of the historical, but a commitment to studying how literature creates structures that are abstracted from the world. . . . The Calamity Form is a work of Marxist criticism whose key tenet and admirable example is to call for Marxist critics to do their jobs carefully: to use the tools of formal analysis to make precise, ambitious claims about how texts mediate the conditions of their composition."
— Jack Chelgren

“Acute, lyrical, beautifully researched, and crisply argued, The Calamity Form tracks the ‘slender promise’ of momentary solace Romantic poetry made in the face of early nineteenth-century capitalism. Though Nersessian ratchets down the claims that have been made on the poetry’s behalf, she neither imagines it as simply making peace with the world as it was, or as guilty of the failure to change it. Instead, The Calamity Form sees in its archive a myriad of subtle openings onto possible futures, offering not a solution to capitalism but a range of wary, vigilant attitudes toward it, probing something like what Nersessian suggests Keats thought was ‘the upside of degradation.’ It is a powerful book.”
— Christopher Nealon, Johns Hopkins University

“To name the Industrial Revolution as ‘the calamity form’ is to begin at the end, at the birth of a total transformation that will promise planetary death. This book intervenes into an astonishing multiplicity of debates: poetry and its scholarship, ecocriticism, the matter of capital, literary theory, and more. It renovates Romanticism and takes its place in the blossoming field of Marxist poetics. But perhaps most of all it is a demand, careful and clear, that we unmake the world that gave us this calamity and the calamity that gave us this world. At this late date, a romantic communism is no longer possible; a communist romanticism herein makes its return.”
— Joshua Clover, University of California, Davis

Anahid Nersessian is associate professor of English at the University of California, Los Angeles. She is the author of Utopia, Limited: Romanticism and Adjustment, and the coeditor of the Thinking Literature series, published by The University of Chicago Press.
Loading...
or support indie stores by buying on