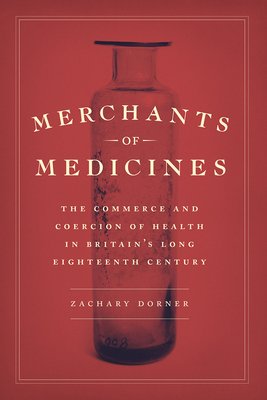 The period from the late seventeenth to the early nineteenth century—the so-called long eighteenth century of English history—was a time of profound global change, marked by the expansion of intercontinental empires, long-distance trade, and human enslavement. It was also the moment when medicines, previously produced locally and in small batches, became global products. As greater numbers of British subjects struggled to survive overseas, more medicines than ever were manufactured and exported to help them. Most historical accounts, however, obscure the medicine trade’s dependence on slave labor, plantation agriculture, and colonial warfare.

In Merchants of Medicines, Zachary Dorner follows the earliest industrial pharmaceuticals from their manufacture in the United Kingdom, across trade routes, and to the edges of empire, telling a story of what medicines were, what they did, and what they meant. He brings to life business, medical, and government records to evoke a vibrant early modern world of London laboratories, Caribbean estates, South Asian factories, New England timber camps, and ships at sea. In these settings, medicines were produced, distributed, and consumed in new ways to help confront challenges of distance, labor, and authority in colonial territories. Merchants of Medicines offers a new history of economic and medical development across early America, Britain, and South Asia, revealing the unsettlingly close ties among medicine, finance, warfare, and slavery that changed people’s expectations of their health and their bodies.


Praise For Merchants of Medicines: The Commerce and Coercion of Health in Britain’s Long Eighteenth Century…

"A multifaceted insight into how medicines bound together British military forces, colonial territories, manufacturing, and trade during the long eighteenth century. . . . Balanced by a nuanced consideration of the many meanings of medicines—from symbols of health and hope to tools of coercion."
— American Historical Review

“Drawing on important and underused archival sources, this book is essential reading for historians of medicine, pharmacy, empire, and trade. The publication is beautifully produced, with well-designed maps and carefully chosen images. It is superb example of how ledgers, letters, accounts and government records can be utilized to build an intricate picture of how merchants made (and lost) money from a trade inextricably linked to the growth of empire and exploitation.”
— British Society for the History of Medicine

“A compelling and nuanced account of the emergence of the transatlantic infrastructure that both prompted and was prompted by the circulation of chemical and natural medicine from the United Kingdom to its growing colonial empire. . . . [Dorner] compellingly documents the rise of the global medical marketplace, its complicity with the rise of modern capitalism, and the technological and fiscal infrastructures that continue to support multinational corporate medicine.”
— The Year’s Work in Critical and Cultural Theory

"Excellent. . . In five wide-ranging and densely researched chapters, Dorner lays bare the links between health, power, and violence that permeated the development of the nation’s imperial trade in medicine. . . . Merchants of Medicines provides an original analysis of eighteenth-century globalization that is dispiriting but rings horribly true."
— British Journal for the History of Science

“Meticulously researched, methodologically innovative, and brilliantly argued, Merchants of Medicines is a masterful work that places the medicinal trade at the center of the emergence of modern ideas about empire, disease, healthcare, race, and corporeality in the eighteenth century. Dorner demonstrates how a previously overlooked profit-driven network of apothecaries, financiers, surgeons, planters, and drug traders was determinant in shaping the new political-economic models, based on exploitative labor and ideas about the universal nature of disease, that sustained the violent webs of the British empire and its slave societies. This book breaks new ground.”
— Pablo Gómez, University of Wisconsin

“Merchants of Medicines is an ambitious, learned, and skillful reinterpretation of eighteenth- century British pharmaceuticals in their global contexts. Dorner elegantly recasts the story of medicine in the early modern Atlantic world as one fundamentally located in the world of commerce.”
— Benjamin Siegel, Boston University

"Merchants of Medicine tracks medicines manufactured in England, shipped to colonial outposts in North America, the Caribbean and India, and administered, by consent or coercion, to laboring populations. Dorner’s study connects the histories of capitalism and empire to those of science and medicine, treating manufactured medicines as commodities for long-distance trade."
— Eighteenth-Century Studies

"A fascinating account of how the medicine industry in its eighteenth-century form became embedded in nearly every aspect of the imperial economy."
— Journal of the Southern Association for the History of Medicine and Science

"Dorner's argument is built on a rich set of archival sources, including petition ledgers, account books, tax records, recipes, insurance policies, contracts and correspondence. . . . Merchants of Medicines draws together histories of medicine, capitalism, race and empire; histories that are by nature inseparable. Through their interactions, Dorner shows how slavery, warfare, resource extraction and financial institutions influenced the trade in medicines, resulting in wider changes in perceptions about the role of medicines in everyday life. This book is a welcome addition to conversations concerning the early political economy of medicine, race in early modern empire and the rise of capitalism."
— Social History of Medicine

"In this well-researched and solidly crafted monograph, Dorner brings together three disparate literatures—the new history of capitalism, histories of empire, and the history of medicine. . . . Capitalism as a set of logics and practices, Dorner ably shows, helped to mold the most fundamental logics of British medicine."
— Journal of Interdisciplinary History

"A very detailed, textured and deep study of the history of Britain’s drug markets and its imperial drugs trade. . . . What is original and unique about this book is that it shows that Britain’s domestic financial market and its empire created a new regime of production, distribution, and selling of drugs in the eighteenth century across the Atlantic and the Indian oceans."
— Metascience

"Drawing on an impressive array of primary sources, Dorner weaves together the histories of successful apothecaries and merchants in London and North America with those of plantation owners, Royal Navy officers, and East India Company directors. Ultimately, this allows him to illustrate that these imperial actors considered medicines to be central to maintaining and restoring the health of large groups of people – enslaved people, soldiers, and sailors – whose ability to work was a necessary condition in the construction and operation of empire. Furthermore, the book shows that choosing these new medicines over others had more to do with commercial expediency than with well-defined medical ideas. . . . While the book’s overarching narrative is one of modernization, one in which commercial activity reached a global scale and technology became increasingly complex, this outcome is not presented as inevitable. Dorner offers a historical narrative that emphasizes the roots of the world in which we live."
— Ambix: The Journal of the Society for the History of Alchemy and Chemistry

Zachary Dorner is an Assistant Clinical Professor in the University Honors Program at the University of Maryland, College Park.
Loading...
or
Not Currently Available for Direct Purchase