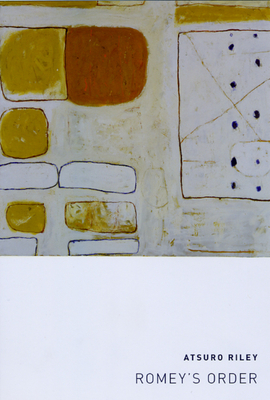 Romey's Order is an indelible sequence of poems voiced by an invented (and inventive) boy-speaker called Romey, set alongside a river in the South Carolina lowcountry.

As the word-furious eye and voice of these poems, Romey urgently records--and tries to order--the objects, inscape, injuries, and idiom of his "blood-home" and childhood world. Sounding out the nerves and nodes of language to transform "every burn-mark and blemish," to “bind our river-wrack and leavings," Romey seeks to forge finally (if even for a moment) a chord in which he might live. Intently visceral, aural, oral, Atsuro Riley's poems bristle with musical and imaginative pleasures, with story-telling and picture-making of a new and wholly unexpected kind.

"The best literature forces you out of your old eyes and that’s what happens here. Atsuro Riley's Romey’s Order is deep craft--brilliant and consuming and thoroughly strange. When you put this book down, American poetry will be different than when you picked it up."
— Kay Ryan, United States Poet Laureate, 2008-10

“Romey’s Order is the world of a young boy growing up in backwoods South Carolina.  His father is an ex-soldier, his mother the Japanese wife the father brought home from his time as a soldier. Thus the radical dichotomies in the young boy’s world, rendered in a dense and beautiful, intensely expressive and inventive language. This language is indebted to Hopkins as well as Heaney, full of a child’s invented word-play trying to capture the smells and textures and country-speech he is constantly assaulted by. The boy is obsessed with language, words that save the dense world from extinction. Words confer almost a magical immediacy to experience, but also wound: half-Asian, at the fair he finds a stall with a game called ‘Shoot the Gook Down.’ The author frames all this as his heritage: ‘This is the house . . . I come from and carry.’  The result is amazing and indelible, a brilliant work.”

“Romey’s Order will draw you in and forward from the moment you enter its compelling initial image: an enchanted cave of a ditch pipe. The poems are pure joy on the level of the syllable, pure music on the level of the phrase, and pure integrity on the level of the form: a ‘pure product of America’—yet one that is sanely exuberant, as real to the touch as a barbed wire fence and as tender to the mind as a willow.”

“A stunning first book of poems. . . . Even read silently, Mr. Riley’s delicious words roll and roil in the mouth.”

"Originality is easier said than done. Most works of art, like most consumer goods, are versions or outright imitations. In contemporary poetry, even the so-called experimental often seems derivative and weighted with conventions. But when a new book of poems is as different from precedents as Atsuro Riley's Romey's Order, readers should take special notice."
— Jim Schley

"Probably the most delightfully weird poet in America."
— Jonathon Sturgeon

“Atsuro Riley’s Romey’s Order is a first book with rare, powerful distinction—experimental in its forms and syntax, yet familiar as an old-time fiddle for its Appalachian twang, landscape, and imagery.”

"Atsuro Riley's astonishing and original debut collection, Romey’s Order, thrives off its music. The poems are about the attempt to make sense of the world, to account for all the strange and disparate details that enthrall consciousness, and to hold them in some kind of right relation…. There’s a lot to marvel at here."
— Poetry

“Atsuro Riley’s strange, beautiful and unsettling debut is like nothing else you will read this year.”

“One of the most exciting and distinctive debut collections in years.”—The Believer

Atsuro Riley has an uncanny and unparalleled ability to blend lyric and narrative modes. . .his style and language are fresh and inventive, thrillingly attentive to the intonations of speech, to the textures of sound and syllable.
— The Whiting Awards

Indelible first-book masterpiece. . .Riley’s evocative abilities are flat-out astonishing.  The relation of object to locale to cadence to mood—the relation of language to the actual experience of perception—is 100 percent pitch-perfect here.  A blast of fresh air for poetry.
— The Believer

Riley’s poems are saturated with the tastes and textures, the heft and drag and slippery joys of words-as-things.  Words strung with gut and weighted down with quarried stone. Words leavened and baked in local ovens. Language you can chew. He is a fabulous latter-day incarnation of Gerard Manley Hopkins, for whom the material world— everything that flies and creeps and burrows and shimmers —and the material world of words are the substance and occasion of unending praise.
— Kate Tufts Discovery Award

"Both Heard-Hoard and Romey’s Order immerse the reader in the South Carolina lowcountry, in a community filled with character, story, and landscape. However, in the second book, it is a tired and broken place. Romey’s world, if not actively inviting, at least feels exciting, gorgeous in its terror. In both collections, the beauty in Riley’s language is undeniable. It chatters with exuberance and discovery in Romey’s Order; in Heard-Hoard it moans like a blues. Both books present abuse, racism, and displacement, one through the eyes of a child, the other through the eyes of victims and scarred survivors. Perhaps these books pair like innocence and experience, or perhaps they pair like the individual and the collective. Either way they show a poet perpetually at the top of his craft, balancing music and silence to create power."
— Georgia Review

Atsuro Riley is the author of Heard-Hoard, winner of the Alice Fay di Castagnola Award from the Poetry Society of America, a finalist for PEN America’s Voelcker Poetry Award, a Boston Globe Best Book of 2021, and a Bookworm Top 10 Book of the Year. His 2010 book Romey’s Order was the winner of the Whiting Award, the Kate Tufts Discovery Award, The Believer Poetry Award, and the Witter Bynner Award from the Library of Congress. Riley’s work has been honored with the Lannan Foundation Literary Fellowship, the Pushcart Prize, and the Wood Prize given by POETRY magazine. Brought up in the South Carolina lowcountry, he lives in San Francisco. He is the editor of Revel, a literary journal.