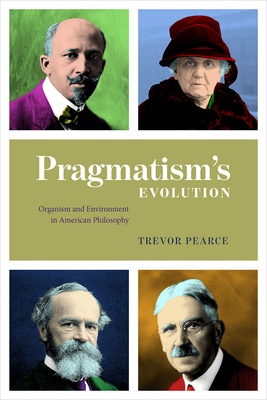 Organism and Environment in American Philosophy

In Pragmatism’s Evolution, Trevor Pearce demonstrates that the philosophical tradition of pragmatism owes an enormous debt to specific biological debates in the late 1800s, especially those concerning the role of the environment in development and evolution. Many are familiar with John Dewey’s 1909 assertion that evolutionary ideas overturned two thousand years of philosophy—but what exactly happened in the fifty years prior to Dewey’s claim? What form did evolutionary ideas take? When and how were they received by American philosophers?

Although the various thinkers associated with pragmatism—from Charles Sanders Peirce to Jane Addams and beyond—were towering figures in American intellectual life, few realize the full extent of their engagement with the life sciences. In his analysis, Pearce focuses on a series of debates in biology from 1860 to 1910—from the instincts of honeybees to the inheritance of acquired characteristics—in which the pragmatists were active participants. If we want to understand the pragmatists and their influence, Pearce argues, we need to understand the relationship between pragmatism and biology.


Praise For Pragmatism's Evolution: Organism and Environment in American Philosophy…

"The merit of [Pearce's] book lies in the huge amount of historical information and precision he brings to a familiar story. . . . His contextualist approach provides even more substance by drawing attention to correspondence, courses, conversations, institutions and venues in addition to published books. . . . Pearce's book is rich in detail, well-delivered and well-written. It will be invaluable to both scholars of pragmatism and historians of science alike and certainly proves the usefulness of the history of science in increasing our understanding of pragmatist theses, whether in metaphysics or ethics, beyond a vague ritualistic reference to Darwin. . . . Pearce has done a superb job."
— Metascience

"Meticulously researched and convincingly argued. . . . Pearce's method is historical and contextualist in the capacious sense, carefully focusing on how context informs content, and eschewing simply reconstructing a particular thinker's arguments in favor of a more nuanced focus on the diverse way these pragmatist thinkers engaged with biology, including correspondence, lecture notes, minutes from formal and informal clubs, newspaper articles, journal publications, and professional debates. Using a cohort approach based on the year each cluster of thinkers he discusses graduated, Pearce shows how evolutionary ideas were debated and appropriated from one generation to the next. A significant and edifying work, this book will interest students and academics alike, particularly philosophers and historians of biology but also those who appreciate nonreductive applications of evolutionary ideas to philosophy. . . . Recommended."
— Choice

"[Pearce] brings a historian's appreciation for, and training in handling, material and textual evidence, along with the philosophical analysis. . . . Pearce's work provides far greater detail than was previously possible. . . . A major contribution to pragmatism and its evolution."
— History: Reviews of New Books

"A major contribution to our understanding of the history of pragmatism, the specific influences, developments, and consequences. . . . [It] should be on the reading list of anyone interested in the history of American philosophy."
— The Quarterly Review of Biology

"There is much to recommend Pearce's comprehensive and engaging study, which shall provide a valuable resource to all scholars and researchers working on late-nineteenth and early-twentieth century American philosophy. . . . The attention which Pearce gives to the British idealists and to Spencer, in particular, is an especially welcome feature of his excellent monograph. . . . Amongst its many other virtues, then, Pearce's text represents a welcome contribution to efforts at extending the pragmatist canon beyond the familiar trio of Peirce, James, and Dewey—which is not to deny that these figures receive the attention they merit in any history of pragmatism. As such, Pearce's text deserves to be very warmly received amongst scholars of pragmatist philosophy."
— Notre Dame Philosophical Reviews

"Pearce has done something remarkable and all too rare: written a book at the intersection of philosophy, science, and history that is equally excellent in all three respects. Scholarly, path-breaking, and not beholden to any received dogmas of pragmatist scholarship, Pearce goes where the historical evidence, his scientific knowledge, and keen philosophical sense take him. . . . Pearce not only provides an excellent way to unify the historical pragmatist tradition, but also to broaden it beyond the typical list of white male figures. . . . Pragmatism's Evolution should be read by everyone interested in pragmatism, the history and philosophy of biology, and/or late 19th and early 20th century American intellectual and social history. It is an excellent book, in every respect, and pragmatist scholarship must surely adapt to its evolutionary progress—or die."
— International Journal of Philosophical Studies

"Trevor Pearce’s Pragmatism’s Evolution proves that there are still new and interesting things to say about a philosophical movement and method often cited as distinctly ‘American’. . . . Pearce provides a detailed overview of pragmatism that takes a fresh look at some well-trodden ground. As such, it will surely engage ‘historians of philosophy . . . [and] historians and philosophers of biology’, no less those claiming an interest in pragmatism more generally."
— Philosophy in Review

"This book is an important contribution to the history of philosophical discussion of biology. I do not know of any other book that covers the material so thoroughly. It will be invaluable to anyone interested in the history of pragmatism and the influence of biology and evolution on pragmatic thinkers."
— Richard J. Bernstein, The New School for Social Research

“Pearce’s book adds a welcome new dimension to discussion of the history of pragmatism. His treatment of the movement’s early years includes an expanded range of characters, some of them fascinating but neglected, others who are recognized as leading figures but not usually linked to pragmatist philosophy. Pearce also shows the influence on pragmatism of an unruly, speculative, and rich collection of ideas about biological evolution and historical change. The book is meticulously researched, very well written, and full of surprises."
— Peter Godfrey-Smith, author of Theory and Reality: An Introduction to the Philosophy of Science

Trevor Pearce is associate professor of philosophy at the University of North Carolina at Charlotte. He is the coeditor of Entangled Life: Organism and Environment in the Biological and Social Sciences and a contributor to The Cambridge Handbook of Evolutionary Ethics and The Timeliness of George Herbert Mead. His articles have been published in HOPOS, the Journal of the History of Ideas, the Journal of the History of Philosophy, and many other publications.
Loading...
or support indie stores by buying on