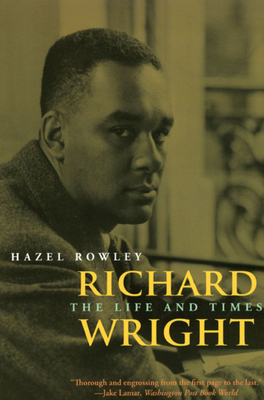 The Life and Times

Consistently an outsider—a child of the fundamentalist South with an eighth-grade education, a self-taught intellectual, a black man married to a white woman—Richard Wright nonetheless became the unparalleled voice of his time. The first full-scale biography of the author best known for his searing novels Black Boy and Native Son, Richard Wright: The Life and Times brings the man and his work—in all their complexity and distinction—to vibrant life. Acclaimed biographer Hazel Rowley chronicles Wright’s unprecedented journey from a sharecropper’s shack in Mississippi to Chicago’s South Side to international renown as a writer and outspoken critic of racism.
Drawing on journals, letters, and eyewitness accounts, Richard Wright probes the author’s relationships with Langston Hughes and Ralph Ellison, his attraction to Communism, and his so-called exile in France. Skillfully interweaving quotes from Wright’s own writings, Rowley deftly portrays a passionate, courageous, and flawed man who would become one of our most enduring literary figures.

“Splendid. . . . Richard Wright is well written, prodigiously researched, and nicely paced, a compelling evocation of the man, his craft, and the different worlds through which he moved.”—Michael J. Ybarra, Wall Street Journal

“A magnificent biography, subtle and insightful. . . . Rowley writes with style and grace, and her research on Wright is prodigious.”—Howard Zinn, The Week

Praise For Richard Wright: The Life and Times…

“Splendid. . . . Richard Wright is well written, prodigiously researched, and nicely paced, a compelling evocation of the man, his craft, and the different worlds through which he moved.”

“A magnificent biography, subtle and insightful. . . . Rowley writes with style and grace, and her research on Wright is prodigious.”

"Rowley is an unobtrusive biographer who has written a well-balanced and thoroughly readable book. It now stands as the best account of Wright's life."
— Peter Byrne

"For the first time, Wright's complicated life and work are fully and justly illuminated."
— Booklist

"Tirelessly, imaginatively researched and elegantly written, [the book] examines this enigmatic native son with an exacting but also finely sympathetic eye. The result is a portrait of uncommon penetration and skill--surely one of the finest literary biographies to appear in many a year."
— Arnold Rampersad, author of The Life of Langston Hughes

"Of the books written on Wright to date, [this] new biography . . . is more informative, comprehensive and insightful than any of the earlier efforts. . . . A superb book from start to finish."
— Robert Fleming

"Rowley has produced the definitive Wright biography. . . . Rowley's work is everything a literary biography should be: a rich, impeccably detailed rendering of the historical and biographical circumstances surrounding a writer's work. Critics and teachers of Wright will find Rowley's work indispensable. Through her careful research . . . Rowley offers readers new facets of Wright as a writer and person, demonstrating above all the heavy toll that Wright's heroic, groundbreaking anti-racism took on his financial, political, aned psychological well-being."
— Andrew Strombeck

Hazel Rowley is the author of, most recently, Tête-à-Tête: The Tumultuous Lives and Loves of Simone de Beauvoir and Jean-Paul Sartre, which has been translated into twelve languages. During the writing of this book, she was a fellow at the Du Bois Institute for Afro-American Research at Harvard, a Rockefeller fellow at the University of Iowa, and a Bunting fellow at Radcliffe College, Harvard University.
Loading...
or
Not Currently Available for Direct Purchase