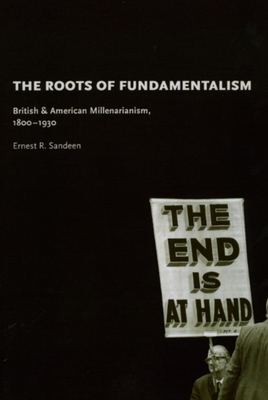 The Roots of Fundamentalism

Ernest Sandeen’s Roots of Fundamentalism remains a landmark work in the history of religion. A National Book Award finalist, it was the first full-length study to present an intellectual historical critique of the Fundamentalist movement in America. Sandeen argues that our understanding of this movement has been grievously distorted by the Fundamentalist-Modernist debate of the 1920s, as symbolized by William Jennings Bryan and the Scopes trial. Rather than viewing Fundamentalism as a chiefly sociological phenomenon of the 1920s, Sandeen argues from a transatlantic perspective that the Fundamentalist movement “was a self-conscious, structured, long-lived dynamic entity” that had its origins in Anglo-American millenarian thought and movements of the nineteenth century.
"All historians need to face the issues [this book] raises. Serious theological discussion of Fundamentalism tends to be neglected because it is intellectually unfashionable: Mr. Sandeen shows that for the historian such neglect is a luxury he cannot afford.”—David M. Thompson, English Historical Review  “Sandeen’s ‘new approach to Fundamentalism’ eschews the common tendency to see the movement as parochially American, rurally based, and essentially a phenomenon of the twenties. . . . It is a highly valuable addition to American and—more singularly—to comparative theological history.”—William R. Hutchinson, Journal of American History

Ernest R. Sandeen (1931–82) was the James Wallace Professor of History and codirector of the Living Historical Museum at Macalester College.
Loading...
or support indie stores by buying on