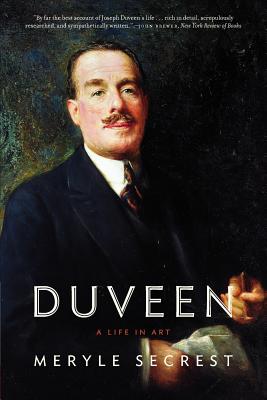 A Life in Art

Anyone who has admired Gainsborough's Blue Boy of the Huntington Collection in California, or Rembrandt's Aristotle Contemplating the Bust of Homer at the Metropolitan Museum of Art in New York owes much of his or her pleasure to art dealer Joseph Duveen (1869–1939). Regarded as the most influential—or, in some circles, notorious—dealer of the twentieth century, Duveen established himself selling the European masterpieces of Titian, Botticelli, Giotto, and Vermeer to newly and lavishly wealthy American businessmen—J. P. Morgan, John D. Rockefeller, and Andrew Mellon, to name just a few. It is no exaggeration to say that Duveen was the driving force behind every important private art collection in the United States.

The first major biography of Duveen in more than fifty years and the first to make use of his enormous archive—only recently opened to the public—Meryle Secrest's Duveen traces the rapid ascent of the tirelessly enterprising dealer, from his humble beginnings running his father's business to knighthood and eventually apeerage. The eldest of eight sons of Jewish-Dutch immigrants, Duveen inherited an uncanny ability to spot a hidden treasure from his father, proprietor of a prosperous antiques business. After his father's death, Duveen moved the company into the riskier but lucrative market of paintings and quickly became one of the world's leading art dealers. The key to Duveen's success was his simple observation that while Europe had the art, America had the money; Duveen made his fortune by buying art from declining European aristocrats and selling them to the "squillionaires" in the United States.

"By far the best account of Joseph Duveen's life in a biography that is rich in detail, scrupulously researched, and sympathetically written. [Secrest's] inquiries into early-twentieth-century collecting whet our appetite for a more general history of the art market in the first half of the twentieth century."—John Brewer, New York Review of Books

Meryle Secrest has written biographies of, among others, Romaine Brooks, Bernard Berenson, Kenneth Clark, Salvador Dalí, Stephen Sondheim, and Frank Lloyd Wright, the last available from the Unviersity of Chicago Press.
Loading...
or support indie stores by buying on