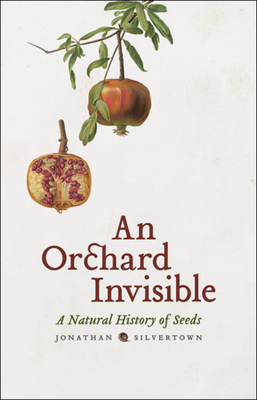 A Natural History of Seeds

The story of seeds, in a nutshell, is a tale of evolution. From the tiny sesame that we sprinkle on our bagels to the forty-five-pound double coconut borne by the coco de mer tree, seeds are a perpetual reminder of the complexity and diversity of life on earth. With An Orchard Invisible, Jonathan Silvertown presents the oft-ignored seed with the natural history it deserves, one nearly as varied and surprising as the earth’s flora itself.

Beginning with the evolution of the first seed plant from fernlike ancestors more than 360 million years ago, Silvertown carries his tale through epochs and around the globe. In a clear and engaging style, he delves into the science of seeds: How and why do some lie dormant for years on end? How did seeds evolve? The wide variety of uses that humans have developed for seeds of all sorts also receives a fascinating look, studded with examples, including foods, oils, perfumes, and pharmaceuticals. An able guide with an eye for the unusual, Silvertown is happy to take readers on unexpected—but always interesting—tangents, from Lyme disease to human color vision to the Salem witch trials. But he never lets us forget that the driving force behind the story of seeds—its theme, even—is evolution, with its irrepressible habit of stumbling upon new solutions to the challenges of life.

"I have great faith in a seed," Thoreau wrote. "Convince me that you have a seed there, and I am prepared to expect wonders." Written with a scientist’s knowledge and a gardener’s delight, An Orchard Invisible offers those wonders in a package that will be irresistible to science buffs and green thumbs alike.


Praise For An Orchard Invisible: A Natural History of Seeds…

“Seeds—familiar, mysterious, wonderful, endlessly fascinating, but rarely considered carefully. In this beautifully written popular exposition, Jonathan Silvertown brings seeds to life, illuminating their diversity, their amazing properties, their role in nature, evolution and fate over time, germination and fate in the life of an individual. To be read by all those interested in nature: they will gain deeper understanding from the lively words that trace these and many other aspects of these familiar structures.”
— Peter H. Raven, director, Missouri Botanical Garden

“An oak yields millions of acorns through its life, yet one survivor alone secures its line: natural selection acts most stringently on a seed. Here the author of Demons in Eden, with apt and at times hilarious quotation, explores how humanity has ingeniously exploited the extraordinary and complex devices by which plants, through their seeds, have surmounted competition. Beneath, we observe the relentless yet haphazard tide which is evolution.”
— Peter Ashton, Harvard University

"Seeds may look small and boring, yet tricks, bribes and devious deceptions lie at the heart of their evolution, as ecologist Jonathan Silvertown entertainingly recounts in this fascinating celebration of the green world upon which all human life depends."
— New Scientist

“Entertaining and charmingly illustrated. . . . For all its erudition, however, this is not an encyclopedia of botanical lore, nor a definitive text, but rather a little gem of science writing that deserves a spot on any natural history lover's bedside bookstand. . . . It is simply a delight to read.”

“Just as a seed contains the ability to create a whole plant, the evolution of seeds can serve as a microcosm for plant evolution. British ecology professor Silvertown begins with a discussion of how seeds evolved to adapt plants to a fully terrestrial life when they emerged from the sea. In the process, he covers many relevant topics, including sexual and asexual reproduction, plant genetics, plant self-defense and seed dispersal, plant poisons, and seeds as food. The author also explains the coevolution of plants and animals, as in using and perceiving color. He covers some plant products humans use, such as sunflower oil, grain for beer, and coffee. Like Michale Pollan in The Botany of Desire, Silvertown cites historical attitudes and quotations about particular plants. But he focuses primarily on the science of plant evolution rather than human history or anecdote. . . . Silvertown writes both elegantly and clearly, and the book is as pleasurable to read as it is informative.”

“A fabulous book. . . . Silvertown’s skills are in telling stories. Expect wonders, too. . . . In this book, Silvertown has produced a gem. . . . Read it as a gardener, scientist, food aficionado, historian, botanist, or naturalist, and you’ll not be disappointed.”

"In a nutshell, I will never look at seeds the same way again, whether teeny poppy seeds or mammoth coconuts. . . . [A] delicious little book."
— Leigh Dayton

“Focusing on seeds, Jonathan Silvertown has written a witty and charming introduction to the evolutionary wiles of the plant kingdom. . . . Do read this eye-opening book.”

"Silvertown is a witty botanist with a flair for seeds. . . . All botanists will enjoy this tribute to seeds."
— Choice

"A subtle but engaging narrative of the evolutionary struggles of seeds. . . . Each of the first twelve chapters of this book tells a remarkable story, accompanied by well-chosen literary excerpts."
— Times Literary Supplement

"An enthralling study of the ways seeds survive in the terrestrial world, and also sustain us humans. . . . [The] book will clearly remind its audience of a more vibrant, more sentient world than they might have imagined just outside their door."
— Alan Moores

"Anyone who has ever marveled at the idea of a tree exploding from something as tiny as a seed will exalt in the beauty of this book."
— San Francisco Chronicle

"Now is the season to plant a garden. And there's no better companion for your labors than Jonathan Silvertown's thorough yet eminently readable history of seeds, An Orchard Invisible. . . . A veritable wonder-chamber."
— Phoebe Connelly

"This far-ranging book is a recommended tonic for hungry gardening minds."
— Bloomsbury Review

"...gave me a whole new appreciation and understanding of the interrelatedness of plants, animals, insects, microbes, geology, weather, ad infinitum: how their interactions helped form present-day flora...Silvertown takes readers on a vast adventure around the globe in clear, interesting and often amusing side trips studded with examples of foods, oils, perfumes and pharmaceuticals with an eye toward the unusual..."
— The Norman Transcript

"Jonathan Silvertown, professor of ecology at the UK's Open University, has answered two fundamental but complex questions: what are seeds and how have they evolved? An Orchard Invisible contains some dense scientific argument but Silvertown, who is fascinated by the evolutionary strategies of seeds, nevertheless succeeds in making his enthusiasm infectious enough to attract the general reader."
— Harry Eyres

Jonathan Silvertown is professor of evolutionary ecology and chair of technology-enhanced science education in biological sciences in the Institute of Evolutionary Biology at the University of Edinburgh. He is the author of numerous books on ecology and evolution.
Loading...
or
Not Currently Available for Direct Purchase