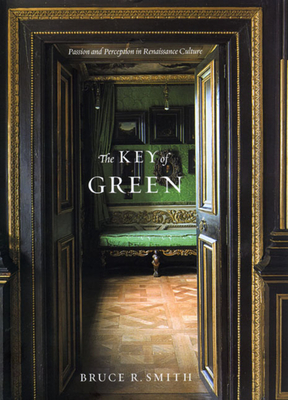 The Key of Green

Passion and Perception in Renaissance Culture

From Shakespeare’s “green-eyed monster” to the “green thought in a green shade” in Andrew Marvell’s “The Garden,” the color green was curiously prominent and resonant in English culture of the sixteenth and seventeenth centuries. Among other things, green was the most common color of household goods, the recommended wall color against which to view paintings, the hue that was supposed to appear in alchemical processes at the moment base metal turned to gold, and the color most frequently associated with human passions of all sorts. A unique cultural history, The Key of Green considers the significance of the color in the literature, visual arts, and popular culture of early modern England.
Contending that color is a matter of both sensation and emotion, Bruce R. Smith examines Renaissance material culture—including tapestries, clothing, and stonework, among others—as well as music, theater, philosophy, and nature through the lens of sense perception and aesthetic pleasure. At the same time, Smith offers a highly sophisticated meditation on the nature of consciousness, perception, and emotion that will resonate with students and scholars of the early modern period and beyond. Like the key to a map, The Key of Green provides a guide for looking, listening, reading, and thinking that restores the aesthetic considerations to criticism that have been missing for too long.

Praise For The Key of Green: Passion and Perception in Renaissance Culture…

“This is, quite simply, a brilliant and groundbreaking book. The Key of Green is immensely readable, fluent, quirky, and passionate, and always simultaneously intellectually rigorous and deeply learned.”

“This is a beautifully written book about what might be called greening power. Ambitiously, it takes on the embodied discourse of color from Aristotle to Shakespeare, Donne, and Spenser. In this major contribution to the new interdiscipline of Ambient Studies, Bruce Smith explores all manner of wonderful ‘green stuff,’ locating its enduring draw within a broad spectrum of Renaissance and Baroque concerns, ranging from physics to metaphysics and all things psychological in between.”

"[A] wide-ranging, in places brilliant, study of the color green in the Renaissance...Essential."—Choice
— Choice

"I am grateful for Smith's speculative and groundbreaking exploration of the way philosophical and literary texts, paintings, works of plastic art . . . can be understood to collude with written texts. . . . An exploration of how nonverbal evanescent communications of sensation and emotion can become part of our historical undestanding."
— Ellen Spolsky

"'Green has power to upset,' Bruce Smith announces at the beginning of his splendid study . . . and Smith's study of green itself has power to instruct and delight us, the aims Horace attributes to literature in general. In so doing this book also has the ability to upset many preconceptions about and previous approaches to its subject matter."
— Heather Dubrow

An extraordinarily informative, insightful, and provocative work of scholarship. [Smith's] proposal merits trial by every English renaissance literary scholar and consideration by literary critics of all persuasions."
— Ira Clark

"The Key of Green provides a rich introduction to the extra-literary contexts of the early modern written word....It is indeed a book to wander through and contemplate as though at an art gallery."—Peter Auger, Early Modern Literary Studies

Bruce R. Smith is the College Distinguished Professor of English at the University of Southern California and the author of, most recently, Shakespeare and Masculinity and The Acoustic World of Early Modern England, the latter published by the University of Chicago Press.
Loading...
or
Not Currently Available for Direct Purchase