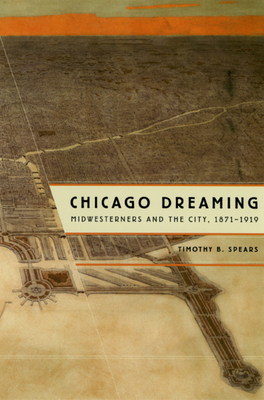 By Timothy B. Spears

During the late nineteenth century, Chicago's population grew at an astonishing rate, with an estimated growth of 900,000 people between 1860 and 1890. Drawn to the opportunities generated by an expansive economy, hinterland migrants from the rural Midwest flocked to the city, their visions of prosperity creating a thriving modern urban culture. The hopes of these newcomers are the subject of Timothy B. Spears's book Chicago Dreaming—the story of Chicago's growth and the transplanted Midwesterners who so decisively shaped the young city's identity.

Through innovative readings of Theodore Dreiser, Willa Cather, and Richard Wright, Spears argues that the migratory perspective was crucial to the rise of Chicago's emerging literary culture. In following the paths of several well-known migrants, including Jane Addams, cartoonist John T. McCutcheon, and businessman John Glessner, Spears also shows how the view from the hinterland permeated urban culture and informed the development of key Chicago institutions. Further exploring the notion of dreaming, he brings to light the internal desires that lured Midwestern migrants to the city as well as the nostalgia that led them to dream of the homes they left behind.

With this fascinating new take on the rise of Chicago, Chicago Dreaming blurs the line between country and city to reveal the provincial character of modern urban culture.

Timothy B. Spears is professor in the Department of American Civilization and Literature at Middlebury College. He is the author of 100 Years on the Road: The Traveling Salesman in American Culture.

Praise For Chicago Dreaming: Midwesterners and the City, 1871-1919…

"Chicago Dreaming is about imagining city life. Where William Cronon revealed to us the material relationships between Chicago and its hinterlands, Timothy Spears explores the cultural ties in those early years when the city exploded with energy. Chicago Dreaming captures how Midwestern migrants to the city created a metropolis of the mind. This is first-rate cultural history."
— Elliott Gorn, Brown University

"Chicago Dreaming is a signal achievement in cultural history and literary analysis, an achievement all the more impressive and engaging because of the lucidity of the writing. The combination of the importance of the story being told and the quality of the telling will make this a classic in writing about the city. Spears's book greatly advances and enriches our knowledge of both Chicago and American literature and cultural life."
— Carl Smith, Northwestern University

"Chicago Dreaming is a strong, original, and highly readable book. It's not only a new look at Chicago literature, American realism, and the city as historical and literary artifact, it's also a compelling example of how to write about literature and the real world in relation to one another."
— Carlo Rotella, Boston College

"Spear's lucid and interesting exploration of the impact of midwestern migrants on the literary tradition of Chicago is a major contribution to the city's cultural history. His book depicts a variety of Chicagoans with roots in the hinterland and how they tried to illustrate their urban experiences. . . . . A fascinating account of both Chicago and the migration that these writers represented so well."
— Dominic A. Pacyga

"Spears's book makes a solid contribution to Chicago- and American Studies. His argument that some of modernism's roots may be discernmed in rural mid-America is a needed corrective to the too-prevalent assumption that modernism is purely the byproduct of a fragmented, thoroughly urbanized consciousness."
— James Guthrie

"Spears has made a worthwhile contribution to our understanding of Chicago's remarkable growth during the Gilded Age and Progressive Era."
— Thomas T. Spencer
or
Not Currently Available for Direct Purchase
Copyright © 2020 American Booksellers Association