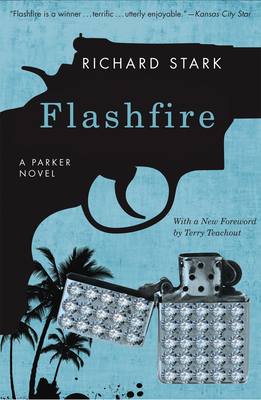 Between Parker’s 1961 debut and his return in the late 1990s, the world of crime changed considerably. Now fake IDs and credit cards had to be purchased from specialists; increasingly sophisticated policing made escape and evasion tougher; and, worst of all, money had gone digital—the days of cash-stuffed payroll trucks were long gone.

But cash isn’t everything: Flashfire and Firebreak find Parker going after, respectively, a fortune in jewels and a collection of priceless paintings. In Flashfire, Parker’s in West Palm Beach, competing with a crew that has an unhealthy love of explosions; when things go sour, Parker finds himself shot and trapped—and forced to rely on a civilian to survive. Firebreak takes Parker to a palatial Montana "hunting lodge" where a dot-com millionaire hides a gallery of stolen old masters—which will fetch Parker a pretty penny if his team can just get it past the mansion’s tight security. The forests of Montana are an inhospitable place for a heister when well-laid plans fall apart, but no matter how untamed the wilderness, Parker’s guaranteed to be the most dangerous predator around.
“Like all of Stark’s Parker novels, Firebreak is a brutal yet compelling glimpse into the amoral world of crime and revenge.”—Booklist
“The action [in Flashfire] is nonstop. . . . The awful fascination in these Parker tales comes from knowing the protagonist will always do whatever is necessary to protect himself and to achieve his goals.”—Wall Street Journal

Praise For Flashfire: A Parker Novel…

“Parker is refreshingly amoral, a thief who always gets away with the swag.”
— Stephen King

“Whatever Stark writes, I read. He’s a stylist, a pro, and I thoroughly enjoy his attitude.”
— Elmore Leonard

“Richard Stark’s Parker novels . . . are among the most poised and polished fictions of their time and, in fact, of any time.”
— John Banville

“Parker is a true treasure. . . . The master thief is back, along with Richard Stark.”
— Marilyn Stasio

“Westlake knows precisely how to grab a reader, draw him or her into the story, and then slowly tighten his grip until escape is impossible.”
— Washington Post

“Donald Westlake’s Parker novels are among the small number of books I read over and over. Forget all that crap you’ve been telling yourself about War and Peace and Proust—these are the books you’ll want on that desert island.”
— Lawrence Block

“Richard Stark writes a harsh and frightening story of criminal warfare and vengeance with economy, understatement and a deadly amoral objectivity—a remarkable addition to the list of the shockers that the French call roman noirs.”
— Anthony Boucher

"Parker is a brilliant invention. . . . What chiefly distinguishes Westlake, under whatever name, is his passion for process and mechanics. . . . Parker appears to have eliminated everything from his program but machine logic, but this is merely protective coloration. He is a romantic vestige, a free-market anarchist whose independent status is becoming a thing of the past."
— Luc Sante

"If you're a fan of noir novels and haven't yet read Richard Stark, you may want to give these books a try. Who knows? Parker may just be the son of a bitch you've been searching for."
— John McNally

"The University of Chicago Press has recently undertaken a campaign to get Parker back in print in affordable and handsome editions, and I dove in. And now I get it."
— Josef Braun

"Whether early or late, the Parker novels are all superlative literary entertainments."
— Terry Teachout

“The UC Press mission, to reprint the 1960s Parker novels of Richard Stark (the late Donald Westlake), is wholly admirable. The books have been out of print for decades, and the fast-paced, hard-boiled thrillers featuring the thief Parker are brilliant.”
— H. J. Kirchoff

“Fiercely distracting . . . . Westlake is an expert plotter; and while Parker is a blunt instrument of a human being depicted in rudimentary short grunts of sentences, his take on other characters reveals a writer of great humor and human understanding.”
— John Hodgman

Richard Stark was one of the many pseudonyms of Donald E. Westlake (1933–2008), a prolific author of crime fiction. In 1993, the Mystery Writers of America bestowed the society’s highest honor on Westlake, naming him a Grand Master.
or support indie stores by buying on