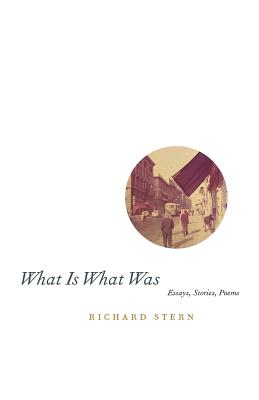 What Is What Was (Paperback)

What Is What Was, Richard Stern's fifth "orderly miscellany," is the first to meaningfully combine his fiction and nonfiction. Stories, such as the already well-known "My Ex, the Moral Philosopher," appear among portraits (of the sort Hugh Kenner praised as "almost the invention of a new genre"): Auden, Pound, Ellison, Terkel, W. C. Fields, Bertrand Russell, Walter Benjamin (in both essay and story), Jung and Freud, Hannah Arendt and Martin Heidegger.

In the book's seven sections are analyses of the Wimbledon tennis tournament as an Anglification machine, of Silicon Valley at its shaky peak, of James and Dante as travel writers, a Lucretian look at today's cosmology, American fiction in detail and depth, a "thought experiment" for Clarence Thomas, a salvation scheme for Ross Perot, a semi-confession of the writer.

The book contains but isn't philosophy, criticism, opinion, reportage, or autobiography (although the author says it is as much of this as he plans to write). There is a recurrent theme, the ways in which actuality is made and remade in description, argument and narration, fictional and nonfictional, but above all, What Is What Was is a provocative entertainment by a writer who, as Philip Roth once said, "knows as much as anyone writing American prose about family mischief, intellectual shenanigans, love blunders—and about writing American prose."

Richard Stern is the Helen Regenstein Emeritus Professor of English and of the Humanities at the University of Chicago and the author of nineteen words of fiction and nonfiction. His novels include A Father's Words and Golk, both published by the University of Chicago Press, and, most recently, Pacific Tremors.
or support indie stores by buying on
Copyright © 2020 American Booksellers Association