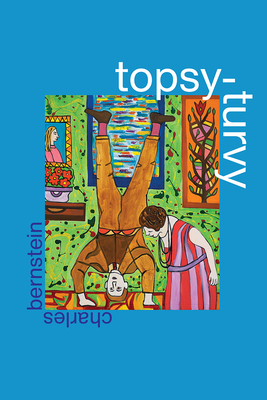 In his most expansive and unruly collection to date, the acclaimed poet Charles Bernstein gathers poems, both tiny and grand, that speak to a world turned upside down. Our time of “covidity,” as Bernstein calls it in one of the book’s most poignantly disarming works, is characterized in equal measure by the turbulence of both the body politic and the individual. Likewise, in Topsy-Turvy, novel and traditional forms jostle against one another: horoscopes, shanties, and elegies rub up against gags, pastorals, and feints; translations, songs, screenplays, and slapstick tangle deftly with commentaries, conundrums, psalms, and prayers.

Though Bernstein’s poems play with form, they incorporate a melancholy, even tragic, sensibility. This “cognitive dissidence,” as Bernstein calls it, is reflected in a lyrically explosive mix of pathos, comedy, and wit, though the reader is kept guessing which is which at almost every turn. Topsy-Turvy includes an ode to the New York City subway and a memorial for Harpers Ferry hero Shields Green, along with collaborations with artists Amy Sillman and Richard Tuttle. This collection is also full of other voices: Pessoa, Geeshie Wiley, Friedrich Rückert, and Rimbaud; Carlos Drummond, Virgil, and Brian Ferneyhough; and even Caudio Amberian, an imaginary first-century aphorist.

Bernstein didn’t set out to write a book about the pandemic, but these poems, performances, and translations are oddly prescient, marking a path through dark times with a politically engaged form of aesthetic resistance: We must “Continue / on, as / before, as / after.”

The audio version of Topsy-Turvy is performed by the author.

“Bernstein is less the furloughed bohemian imagining that he is writing only for himself—not marooned, disowned, or marginalized. Instead, he is employed, populated, by poetry. He is well-read and plugged in. . . . [His] poetry is indeed topsy-turvy. Is he playing a game with our emotions? That is for the reader to decide.”
— Jeremy Sigler

"Bernstein’s constant movement between sincerity and irony, melancholy and humor, seems particularly appropriate for the era of the pandemic. . . .  Topsy-Turvy leaves us with a syncretic gathering of voices, both ambiguous and obscure, and clear and direct. Confronted with the realities of the pandemic, Bernstein’s poetry provides us with a way of appreciating life, despite its impermanence. He reveals order by resisting order, and gives us the world in a new light by playing brilliantly with the old ways."
— Yi-Feng

"Bernstein is a philosophical poet, but not one who articulates philosophical systems so much as one who enacts philosophy itself. Any lack of obvious pleasures in his poetry — his jarring, gangly meters, his love for le mot injuste — should not be seen merely as a sort of intramural critique of the social operations of language, but rather, in addition, we should view Bernstein’s calls to the virtual as signaling a preoccupation with hope. By this I mean: how do we drag these broken bones, how do we assimilate these failures at transcendence, how do we negotiate this commerce between the 'I' and the 'Thou,' in a world that has closed off true potential in the confines of the merely possible? There must be more, there is more, in Bernstein’s view, even as he’s never so doctrinaire, or willing to compromise his sense of the virtual, of the ever forthcoming that already is, as to provide names or definitions for it."
— Brian Kim Stefans

"Not set out to be a book about the pandemic, this rowdy collection of poems, performances, and translations nevertheless speaks volumes about the upside-down world we have all found ourselves living in."
— The Bookseller

“As poet, editor, critic, translator, and educator, Bernstein’s decades-long commitment to the community of arts and letters reflects a profound understanding of the importance of language in the business of culture-making. Throughout his career Bernstein has facilitated a vibrant dialogue between lyric and anti-lyric tendencies in the poetic traditions we have inherited; in so doing, he has shaped and questioned, defined and dismantled ideas and assumptions in order to reveal poetry’s widest and most profound capabilities.”
— Ange Mlinko, Claudia Rankine, and Evie Shockley, Bollingen Prize Committee

Charles Bernstein is the Donald T. Regan Professor Emeritus of English and Comparative Literature at the University of Pennsylvania, where he is codirector of PennSound, and a fellow of the American Academy of Arts and Sciences. He is the author of Pitch of Poetry, Recalculating, and Near/Miss, also published by the University of Chicago Press. In 2019, he was awarded the Bollingen Prize for Poetry from Yale University, the highest American honor for lifetime achievement in poetry.
Loading...
or support indie stores by buying on
(This book is on backorder)