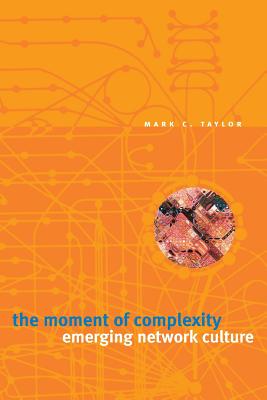 The Moment of Complexity

"The Moment of Complexity is a profoundly original work. In remarkable and insightful ways, Mark Taylor traces an entirely new way to view the evolution of our culture, detailing how information theory and the scientific concept of complexity can be used to understand recent developments in the arts and humanities. This book will ultimately be seen as a classic."-John L. Casti, Santa Fe Institute, author of Gödel: A Life of Logic, the Mind, and Mathematics

The science of complexity accounts for that inscrutable mix of chaos and order that governs our natural world. Complexity explains how networks emerge and function, how species organize into ecosystems, how stars form into galaxies, and how just a few sequences of DNA can account for so many different life forms. Recently, the idea of complexity has taken the worlds of business and politics by storm. The concept is used to account for phenomena as varied as the behavior of the stock market, the response of voting populations, and the effects of risk management. Even Disney has used complexity theory to manage crowd control at its theme parks.

Given the startling development of new information technologies, we now live in a moment of unprecedented complexity, an era in which change occurs faster than our ability to comprehend it. With The Moment of Complexity, Mark C. Taylor offers a timely map for this unfamiliar terrain opening in our midst, unfolding an original philosophy through a remarkable synthesis of science and culture. According to Taylor, complexity is not just a breakthrough scientific concept, but the defining quality of the post-Cold War era. The flux of digital currents swirling around us, he argues, has created a new network culture with its own distinctive logic and dynamic.

Drawing on resources from information theory and evolutionary biology, Taylor explains the operation of complex adaptive systems in social and cultural processes and captures a whole new zeitgeist in the making. To appreciate the significance of our emerging network culture, he claims, we need not only to understand contemporary scientific and technological transformations, but also to explore the subtle influences of art, architecture, philosophy, religion, and higher education. The Moment of Complexity, then, is a remarkable work of cultural analysis on a scale rarely seen today. To follow its trajectory is to learn how we arrived at this critical moment in our culture, and to know where we might head in the twenty-first century.

Mark C. Taylor is professor of religion at Columbia University and the Cluett Professor of Humanities emeritus at Williams College. He is the founding editor of the Religion and Postmodernism series published by the University of Chicago Press and is the author of over thirty books, including Speed Limits: Where Time Went and Why We Have So Little Left and Abiding Grace: Time, Modernity, Death.
Loading...
or support indie stores by buying on