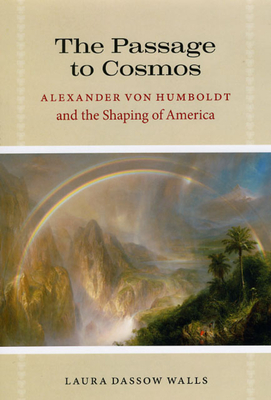 The Passage to Cosmos (Hardcover)

Alexander von Humboldt and the Shaping of America

Explorer, scientist, writer, and humanist, Alexander von Humboldt was the most famous intellectual of the age that began with Napoleon and ended with Darwin. With Cosmos, the book that crowned his career, Humboldt offered to the world his vision of humans and nature as integrated halves of a single whole. In it, Humboldt espoused the idea that, while the universe of nature exists apart from human purpose, its beauty and order, the very idea of the whole it composes, are human achievements: cosmos comes into being in the dance of world and mind, subject and object, science and poetry.

Humboldt’s science laid the foundations for ecology and inspired the theories of his most important scientific disciple, Charles Darwin. In the United States, his ideas shaped the work of Emerson, Thoreau, Poe, and Whitman. They helped spark the American environmental movement through followers like John Muir and George Perkins Marsh. And they even bolstered efforts to free the slaves and honor the rights of Indians.

Laura Dassow Walls here traces Humboldt’s ideas for Cosmos to his 1799 journey to the Americas, where he first experienced the diversity of nature and of the world’s peoples—and envisioned a new cosmopolitanism that would link ideas, disciplines, and nations into a global web of knowledge and cultures. In reclaiming Humboldt’s transcultural and transdisciplinary project, Walls situates America in a lively and contested field of ideas, actions, and interests, and reaches beyond to a new worldview that integrates the natural and social sciences, the arts, and the humanities.

To the end of his life, Humboldt called himself “half an American,” but ironically his legacy has largely faded in the United States. The Passage to Cosmos will reintroduce this seminal thinker to a new audience and return America to its rightful place in the story of his life, work, and enduring legacy.

Laura Dassow Walls is the William P. and Hazel B. White Professor of English at the University of Notre Dame. She is the author most recently of Henry David Thoreau: A Life, also published by the University of Chicago Press.

Praise For The Passage to Cosmos: Alexander von Humboldt and the Shaping of America…

"By recovering the excitement of Humboldtian explorations and travel experiences, Walls wins back Humboldt for the 21st century. Through her account, he joins forces with present-day heroes such as Edward O. Wilson and his Cosmos of a sort, Consilience, all of them reorienting and transforming disciplines and divisions that threaten 'to leach the poetry out of our technologically driven lives.' Walls reclaims for the present a man whose personality and work had a formative influence on the cultural landscape of antebellum America and whose legacy may to good effect be used in addressing current affairs. I recommend The Passage to Cosmos as a fine piece of Humboldt scholarship, a heartfelt plea for environmental holism, and an enjoyable read."
— Nicolaas A. Rupke

"Not the least of the qualities of Dassow Walls’ erudite and wide-ranging narrative is that she enables us to understand something of the man’s genius and polymathic range. Humboldt’s fundamental assumption, she tells us, was that neither humans nor nature could be understood in isolation."—Jeremy Jennings, Times Higher Education

"Walls's masterly prose makes this book an entertaining as well as enlightening look into the life, works, and impact on American thought of one of the giants of 19th-century intellect."—Choice
— Choice

“The Passage to Cosmos is as wide-ranging, as integrative, as creative, and as suggestive, as the man of science who is at its center. . . . In Walls, Humboldt has found a reader whose originality, diligence, curiosity, and moral passion resembles his own. Walls’s book gives the reader a vivid sense of why this fertile polymath meant so much to so many people, how he seemed to provide a kind of key to all knowledge. She also comes to grips with the question of why his influence faded. But most of all, she makes a case for the value of recovering his way of knowing for the contemporary world, and the ways in which some of the most advanced thinkers are only now rediscovering insights that Humboldt proclaimed almost two centuries ago.”